An Alexandria Homecoming at the 9:30 Club
Votes

An Alexandria Homecoming at the 9:30 Club 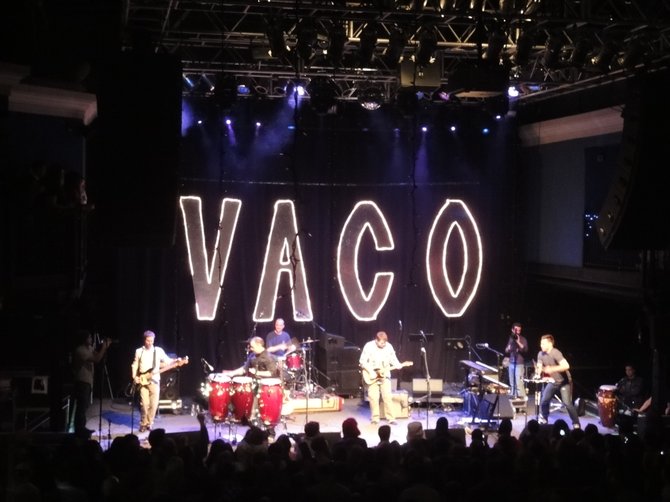 Virginia Coalition will be playing at the 9:30 Club this Saturday, Dec. 22. Photo Contributed 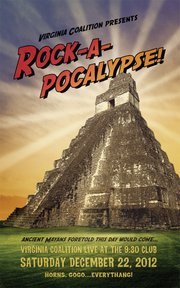 Virginia Coalition intends to celebrate the Mayan calendar being inaccurate in its prediction of the end of the world this week with a concert Saturday night at the 9:30 Club in Washington, D.C.

Alexandria — Two Alexandria-based bands are joining forces for what's bound to be a feel-good show at the 9:30 Club this weekend.

Virginia Coalition, a group of guys that have been making the rounds in rock clubs since their high school days at T.C. Williams and better known to their fans as VACO, are hosting Rock-A-Pocalypse on Saturday, Dec. 22.

Virginia Coalition and Feel Free will be playing at the 9:30 Club this Saturday, Dec. 22. Information on the show is available at http://www.930clu...">www.930club.com. Both bands have songs available for listening and download on their respective Facebook pages.

"We're so excited for this show," said Andy Poliakoff, VACO's lead singer and guitarist. The members of the band -- which includes Paul Ottinger on keyboards, percussion, vocals and bass; Jarrett Nicolay on bass, banjo, guitars, vocals and keyboard; and Adam Dawson on drums-- steal away a few moments to play together outside their full-time jobs and families, with their trademark happy-go-lucky, upbeat songs. A new single, "Together," posted online last week at https://soundcloud.com/paulpeppas/together, is exactly the kind of feel-good music that has earned them a loyal following.

And the upcoming gig at the 9:30 Club, the promotional poster for which features a Mayan-esque stone temple, is a nod to the probably false notion that the world will end on December 21. It's possible the band will ask some old friends to wear bizarre costumes and come out at pre-selected moments during the show to add some levity to the evening. After all, if the Dec. 22 show goes on as scheduled, it'll mean that the world didn't end, and isn't that worth celebrating?

"I think we should always be celebrating," Poliakoff said, and his band's music supports that feeling.

Another band with Alexandria roots, FeelFree will be opening for Virginia Coalition at this Saturday's concert at the 9:30 Club.

When VACO plays a gig in the Northern Virginia area, there are plenty of familiar faces in the crowd, he said. Being that the show is so close to Christmas, it's likely that the concert will double as a kind of homecoming party for their former classmates at T.C. Williams.

And the band enjoys that kind of energy as much as the fans. Now that they're not touring all the time, they have a chance to "savor" being on stage and performing, he said, something they lost touch with when being in front of thousands of people several nights a week was a common occurrence.

This concert is for a different reason as well. It's an opportunity to bring along an up-and-coming band with similar roots and give them the chance to play on the club's legendary stage.

FeelFree, another group of young men who went to T.C. Williams together, will be opening for VACO, and Poliakoff said he sees much of his own band in them.

"I want them to have the experience of being able to play on that stage," he said. "I think of how lucky we've been and how exciting it'll be for them."

Evan Hulehan, one of FeelFree's five members, said his band usually just plays together during breaks from college, as they're all seniors studying music in different schools. They've played at various locations around Northern Virginia, including the Del Ray festival, to positive feedback, and the opportunity to open for VACO is a dream come true, Hulehan said.

"The sister of one of the band members went to school at the same time as the VACO guys," he said. "When they posted they were doing a show at the 9:30 Club, I thought I had to send them an email."

It'll be a nice change from playing in more formal settings, like collegiate music recitals, and the nightclub environment will be more in line with their style of music, which Hulehan describes as roots reggae with a little jazz thrown in for good measure.

They're hoping to do a proper East Coast tour next summer, after graduating, but for now they're focused on the work they can get done during the break. While at school, the guys send ideas for songs back and forth through email, but they try to record when they're together, Hulehan said.