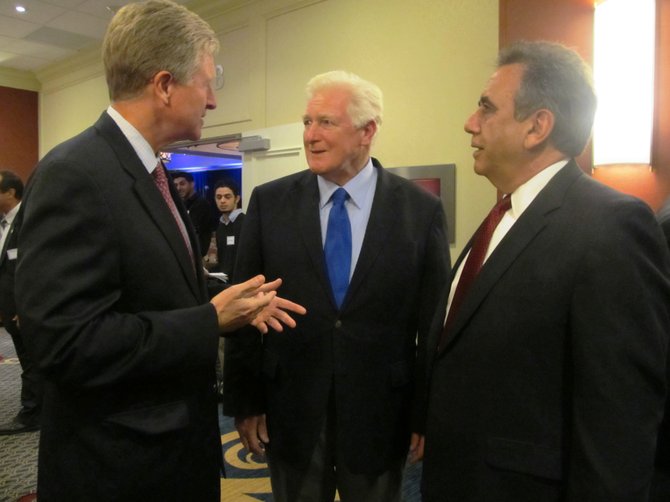 Brian Moran, former chairman of the Democratic Party of Virginia with U.S. Rep. James Moran (D-8) and Fred Shwaery of Vienna, a member of the Arab American Democrats of Virginia at the 24th annual Arab American Candidates’ Night Dinner held at the Tysons Corner Marriott on Sept. 30. 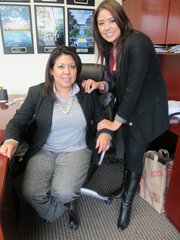 Keisy Chavez, a Latino activist with Latinos for Obama, and daughter Cinthya Qureshi at their business in Herndon.

The Fairfax single mom had been campaigning hard for Democrats since the official launch of Latinos for Obama last April.

She filmed a commercial for Senate candidate Tim Kaine in September, worked phone banks, door-knocked in 104-degree heat, stuffed envelopes, delivered yard signs and seized every opportunity to talk to friends, neighbors and strangers about the importance of the 2012 election.

Her daughter Cinthya Qureshi, 24, likes to tease her mom about her willingness to talk to anyone when it comes to politics.

“If my mom is pumping gas, and sees someone next to her, she will start a conversation about politics,” she said.

“From a political perspective, the way the demographics are shifting, those who would demonize and attack new immigrants and Latinos do so at their peril.”

“I’ve been organizing for President Obama and Governor Kaine since the launch of their campaigns, and everyone I talk to in the Latino community gets fired up to help spread the message of everything they have done for us,” said Chavez.

Keisy Chavez on a trip to Peru, where she grew up.

Chavez was ecstatic over Kaine’s and Obama’s victories in Virginia. “It was such a powerful feeling. I can’t really describe how happy and relieved I felt,” she said. “It shows that you can make a difference. It’s a big motivation to realize that you can have an impact on something bigger than you, something that touches so many people.”

Like many Latinos this election cycle, Chavez made certain her voice was heard. According to exit polls, recent immigrants, not just Latinos, voted overwhelmingly, 73 percent, for Obama in Northern Virginia. Data from the Pew Research Center also shows that Asian Americans have shifted more to Democrats since 2008 than any other minority group. Representing just 3 percent of the national voting population, they are the fastest growing demographic in the United States, and their influence is being felt beyond traditionally blue states, like California, Hawaii, New York and New Jersey, into swing states like Virginia and North Carolina. 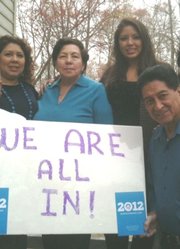 “This area, particularly Fairfax County, is teeming with immigrants, from South America, India, Vietnam, South Korea and elsewhere,” said Frederic Bemak, director of the Diversity Research and Action Center at George Mason University. “I can’t imagine many of them swooned at Romney’s incessant China bashing, or talk of self-deportation for the undocumented.”

“The tectonic plates are shifting on immigration,” said Frank Sharry, a McLean resident and executive director of America’s Voice, an advocacy group for immigrants. “The fact that leading conservative voices are joining Republican leaders in calling for immigration reform that includes relief for the 11 million undocumented immigrants in America is a major development that will open up space for the GOP to do the right thing and help pass sensible reform legislation.”

Sharry said political leaders should consider the response from 2012 voters to this question asked in the network exit polls: “Should most illegal immigrants working in the United States be offered a chance to apply for legal status or deported to country they came from?”

Andrew Eade, wife Stephanie and son Greyson, 21 months, of Herndon. Eade, from England, was one of 75 candidates who took the Oath of Allegiance during a special naturalization ceremony May 25 at the Fairfax County Government Center.

Chavez said the 2012 election was a “reality wake-up call.”

“I think it has finally hit some Republican politicians and policy-makers that if you don’t embrace immigration you will go nowhere. If you really want your party or your candidate or issues to be addressed, you need to embrace the mix of people in this country. Everyone has something to bring, regardless of whether you’re Latino, Asian or Irish.”

Political affiliation aside, research shows that immigrants, especially when they organize and vote, are influencing the political discussion overall, not just electing Democrats.

According to immigration experts, the right to vote is a key motivating factor when immigrants choose to become citizens, instead of just holding on to their green card.

Andrew Eade, who grew up in England, has been working in the U.S. for 16 years. In May, Eade was one of 75 new citizens who took the Oath of Allegiance during a special naturalization ceremony at the Fairfax County Government Center. 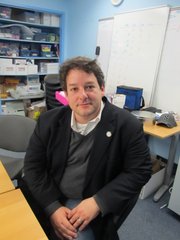 A resident of Herndon for 16 years, Eade said he wanted to become a citizen so he could “fully participate in the system and vote.”

“I’ve been paying taxes for all these years, and I thought it was time to vote. You want to feel like you are getting your voice heard,” he said.

Tam-Anh Lam, 23, called Tammy by her clients at the Four Seasons Nail Salon in Oakton, pulls out a creased photo of her 4-year-old da Leah-Anh to show a client.

She became a citizen when she turned 18, but did not vote until this year. Lam said she wants her daughter to grow up with self-confidence and the higher education she lacks.

“I never paid much attention, but this year there was so much in the news that concerned me.” Lam said news about immigration, education and healthcare struck a chord with her, and she decided she would vote this year.

“I wanted to vote because it gives you power. It’s the American way. . . . I wanted my daughter to know that we’re Americans too, and she can do anything. If I can’t do it, maybe she can. Who knows, she could be a doctor someday,” Lam said.

Community-based organizations, according to a 2009 Urban Institute study, play a key role in encouraging immigrants to enroll in citizenship programs so they can participate in the electoral process.

“A significant aspect of immigrant integration is civic participation,” said Richard Eldridge, the Citizenship volunteer manager at Hogar Immigrant Services, a Fairfax County program of Catholic Charities of the Diocese of Arlington. “We have a strong component of helping people become new citizens, of empowering immigrants through the benefits of citizenship.”

“Our goal is for immigrants to achieve self-sufficiency and participate fully in the greater community,” said Brooke Hammond Perez, education services and group manager. Hogar, which was founded in 1981, offers a combination of legal consultation, English-language instruction and citizenship classes.

While the majority of Hogar’s immigrant clients live below the poverty level, their determination to become engaged, active citizens is inspiring, Hammond Perez said.

But few have touched Hammond Perez personally as much as client Alhaji Alpha Bah, an 82-year-old immigrant from Sierra Leone. In 1992, Bah was a shopkeeper in the West African nation when civil war broke out. During a decade of brutal civil war, when tens of thousands of people died, Bah was forced from his home, living as a refugee in Guinea for seven years before coming to the United States in 2003.

“He was accompanied to the U.S. by four of his nine children,” Hammond Perez said, adding that his other children had to stay behind in Guinea and Sierra Leone. “Even now, he doesn’t know the whereabouts of three of those five children.”

Bah came to Catholic Charities in 2010. He did not have any formal education, did not speak English and was not able to find consistent work. Despite these obstacles, Bah, accompanied by Hammond Perez, was officially sworn in as a U.S. citizen on Oct. 14, 2011. When asked what he wanted to do as a new American, he said he wanted to register to vote as soon as possible. “I feel proud. I feel big. You are a citizen. Welcome to America,” Bah said in video interview discussing his experiences. (To see the video, visit hogarimmigrantservices.org).

In Virginia and at the national level, immigrant voters are changing the political landscape in unprecedented ways and hold increasing influence across the political spectrum.

“From a political perspective, the way the demographics are shifting, those who would demonize and attack new immigrants and Latinos do so at their peril,” said Del. Alfonso Lopez (D-49), the first Latino Democrat elected to the Virginia General Assembly.

Latinos have a long history of political involvement through organizations which give them access to elected officials, according to the Urban Institute.

In contrast, the Urban Institute study says Asian and African immigrant communities are newer and lack long-serving, established leaders to spearhead and encourage participation and advocacy. While Asians comprise 17.4 percent of Fairfax County’s population, compared to 15.6 percent who are Latino, Asians speak many different languages and come from a wide variety of cultures, making it more difficult to politically mobilize the population as a whole.

“The number of organizations devoted to the interest of members of the immigrant community has been increasing just as the number of immigrants has been increasing,” said Del. Ken Plum (D-36). “I try to attend as many meetings of groups with immigrant members to demonstrate to them that they can have a say in government and that there are those in elective office who value the contributions.”

Launched in 1987 by the Arab American Institute (AAI), the event is a forum for campaigning politicians, and a place where the Arab-American community can engage in the political process.

“Candidates’ Night, by admission of most politicians attending the forum, has been praised as one of the best ethnic political forums,” said event Co-Chair Saba L. Shami. “It’s become an institution, bringing candidates together with the Arab American community as an integral part of the American political process.”

Del. Mark Keam (D-35), the first Korean American and the first Asian-born immigrant to serve in the Virginia General Assembly, said Asian immigrants are beginning to see unprecedented growth in both population and political clout.

“In 2000, I was the convention chair of the National Asian American Bar Association. It was held in D.C., and we broke all records. We had 500 lawyers getting together in the same town, and we had a budget of over $300,000. We thought that was big time,” Keam said.

“In 2012, same town, same convention, but this year the event drew 1,700 lawyers and had a budget of $1.6 million,” Keam said. “What that tells you is something about both the physical growth and the economic clout of Asians, because of the money sponsors were willing to spend targeting our community.”

Lopez pointed out that since 2000 Latino voter participation in the Commonwealth of Virginia has gone up between 1 and 3 percent every election cycle. Currently, there are 683,000 Latinos in Virginia, and approximately 183,000 of those are eligible voters, according to the State Board of Elections.

According to the 2010 decennial census, between 2000 and 2010, Latino voter registration increased by 75 percent in Virginia, one of the highest increases in country.

“This is something that really blew me away,” Lopez said. “The average age of the Latino citizen is 15 years old. Think about what that means in two years and four years and eight years. You’re going to see a huge increase in Latino registered voters.”

Lopez said the increasing percentage of Virginia’s Latinos and immigrant voters makes him hopeful that the political polarization regarding immigration reform will diminish.

“There’s something huge about what’s happening in the commonwealth,” Lopez said. “The demographic shifts coming to Virginia will wipe out the effects of the short-sighted anti-immigrant politicking we see now.”

Chavez said it’s just smart—politically and economically—to create a pathway to citizenship for young immigrants. “We’re relying on their talent and skills. It’s not just a Latino concern. . . . It helps the economy and makes America stronger for everyone.”

“Like the program says, ‘it’s the new normal.’ Get used to it. Embrace it,” Chavez said.