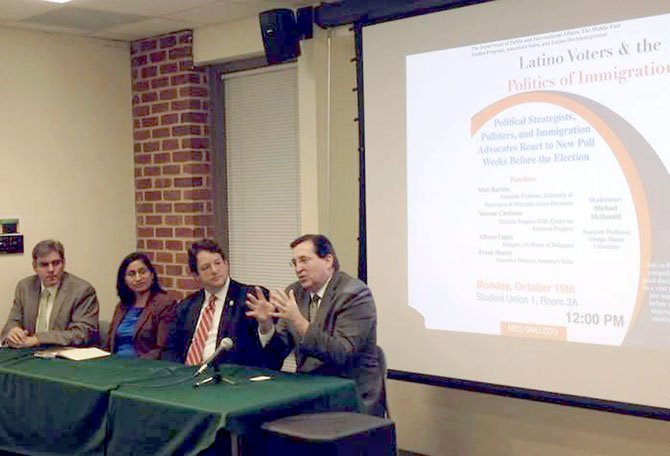 Speaking before a group of political analysts, Latino advocates and community leaders at George Mason University Monday, Lopez—the Commonwealth’s first Latino elected to the state legislature—said that several bills are on the table this GA session that would “demonize” immigrants.

“The demographic shifts coming to Virginia will wipe out the effects of the short-sighted anti-immigrant politicking we see now.”

“The Mac-Daddy (of the proposed bills) which has made Arizona and Alabama look pretty bad, requires carrying an ID with you everywhere,” Lopez said, referring to the commonwealth’s Arizona-style anti-immigration policies requiring all law enforcement officers in the state to inquire about the immigration status of anyone stopped or arrested. “The fact is…what would be the basis for stopping someone and asking for ID?”

In Venezuela, where Lopez’s family is from, “random police would go up to anyone and say ‘give me your ID.’ If someone came up to me and I’m wearing a suit, and looking like my mom, instead of actually my dad, they’d think my name was Al Smith, not Alfonzo Lopez. This is a slippery slope to racial profiling, and this is going to be proposed next session.”

Lopez said the increasing percentage of Virginia’s Latinos and immigrant voters make him hopeful that the political polarization regarding immigration reform will diminish.

HE POINTED OUT that, since 2000, Latino voter participation in the Commonwealth of Virginia has gone up between 1 and 3 percent every election cycle. Currently, there are 683,000 Latinos in Virginia, and approximately 183,000 of those are eligible voters, according to the State Board of Elections.

The rising impact of the Latino vote is well documented.

Earlier this month, the Pew Hispanic Center reported a record 23.7 million Latinos will be eligible to vote in the 2012 election—representing roughly 11 percent of the country's electorate, and that 17 percent reside in presumptive battleground states.

“There’s something huge about what’s happening in the Commonwealth,” Lopez said. “The demographic shifts coming to Virginia will wipe out the effects of the short-sighted anti-immigrant politicking we see now.”

In Virginia and at the national level, Latino voters are changing the political landscape in unprecedented ways, and hold increasing influence on the 2012 campaigns, according to Lopez and other panelists at Monday’s forum, which was co-sponsored by the GMU Department of Public and International Affairs and America’s Voice, a Washington, D.C.-based immigration organization advocating for comprehensive immigration reform.

“There does seem to be an awareness that tectonic plates are shifting,” said Frank Sharry, executive director of America’s Voice.

While Virginia isn’t traditionally a state where Latino voters have held a lot of sway, Sharry said that may change in 2012. “These voters are poised to play a decisive role in both races,” Sharry said, pointing out that despite Mitt Romney’s surge in national polls in recent weeks, his numbers with Latino voters are at “a dismal 22 percent.”

During the panel discussion, moderator Michael McDonald, a professor of government and politics at GMU, released fresh polling of Latino voters in Virginia, from a poll conducted by Latino Decisions for America’s Voice.

“Immigration is a personal issue that affects Latinos’ attitudes toward candidates even if they don’t explicitly name immigration as one of the most important issues facing the country,” McDonald said. For more information on the poll, go to: www.latinodecisions.com/files/7213/5028/2350/Virginia_Toplines.pdf.

*48 percent of Virginia Latinos said that immigration was the most important issue facing the Latino community that Congress and the president should address, while 47 percent said the same about the economy, jobs and unemployment.

According to Vanessa Cardenas, a panelist and executive director of Progress 2050 Action at the Center for American Progress Action Fund, “the youth and diversity of Virginia’s Latino community distinguishes it from many other Latino communities around the country, and the immigrant experience is especially close to Latinos’ hearts here,” she said.

Cardenos said that in the past few years, “Latinos witnessed a very ugly debate around anti-immigrant ordinances in Prince William County that caused many Latinos to leave the county, devastating local business.”