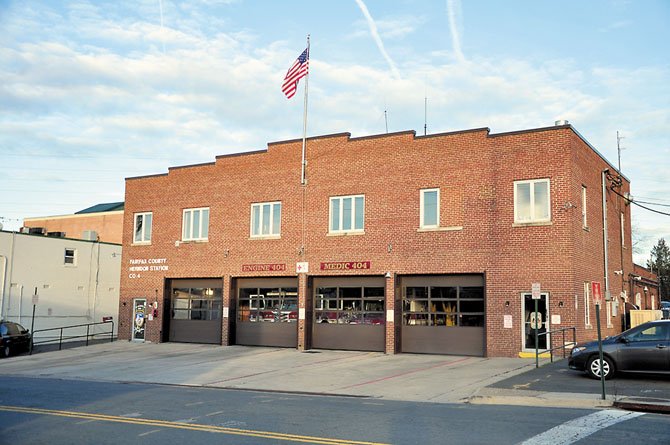 The Herndon Fire Station will be replaced by 2015 with a bigger facility that will allow the firefighters to house more units and equipment. The station’s central location makes it necessary to build the new station on the same lot. Photo by Alex McVeigh.

Herndon — The Fairfax County Fire and Rescue Department, along with the county’s Public Works and Environmental Services division have begun the process of renovating the Herndon Fire Station, located on Spring Street. The original station, built in 1950, will be replaced with a facility that can better handle the special equipment and volume of calls currently serviced at the station.

"We’re very early in the design process, everything is basic and conceptual in nature right now," said Kim Callahan, project manager with the county’s Department of Public Works. "The main reason we are looking at a new station is because the existing one doesn’t give the firefighters much flexibility."

THE NEW SPACE will also allow the station to add specialty units as needed, such as a rescue unit or a second transport unit.

In addition, the residential population in the station’s coverage area is expected to increase over the next 20 years, partially due to the higher densities and commercial development that will come along with the Metrorail.

The current station is a two-story, 8,162 square feet structure on a .26-acre lot. The new fire station will be approximately 14,500 square feet and two stories, and will include larger women’s facilities, decontamination facilities, will meet all Americans with Disabilities Act standards and will contain fitness facilities for the firefighters.

The county will also seek to re-zone the property from Central Commercial District to Planned Development Downtown, in order to allow the increased density.

"Over the past 10 years, we probably looked at 30 different locations, but found the existing site is ideal because of its central location within its coverage area," Callahan said.

Stations are located within the county in relation to other station, with a seven-minute response time for emergencies to 95 percent of the county’s population.

During the approximately two-year construction process, the firefighters will move to a nearby location and set up a temporary space, consisting of a pre-manufactured trailer for personnel and a tent-like apparatus for equipment.

The proposed location for the temporary facility is a block west on Locust Street, at the intersection of Center Street. Callahan said the county is still in negotiations to lease the temporary site property.

The new station will also be LEED Silver in accordance with Fairfax County policy. As currently planned, it will have a maximum height of 38 feet for the elevator tower and 32 feet for the rest of the building. This is an increase over the current building’s 30 feet, but below the maximum 50 feet in a Planned Development Downtown-zoned area.

"The tower is an iconic image when it comes to the history of fire stations, and we found we had a great opportunity to bring that out in our design," said Richard Hurdle of Zivic and Hurdle Architects, the architect on the project.

THE NEW BUILDING will also preserve the old fire pole for display, and will have a lobby area with displays of firefighting memorabilia from Herndon’s history. The original cornerstone for the existing building will also be incorporated into the design.

The temporary facility is expected to be built in late spring 2013, with the new facility opening in the summer of 2015.