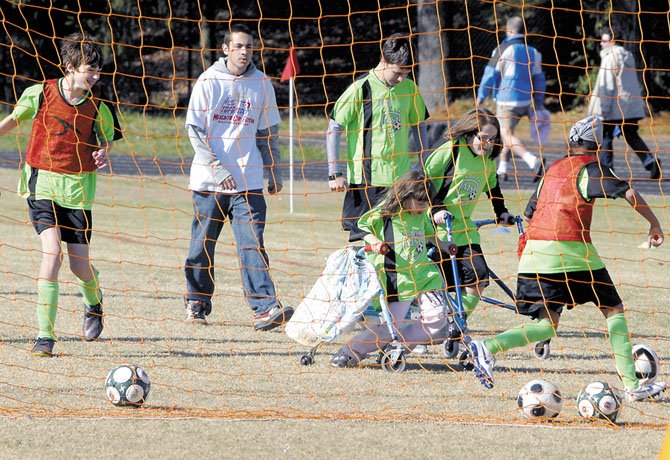 Alexis Kende and Mary Cassell, in the middle, participate in a soccer game with other athletes of the TOPSoccer program in November at Wootton High School. Youth with all disabilities, including those in walkers, participate in the program, despite the difficulty getting around grassy and often muddy fields in their walkers. TOPSoccer is exploring the possibility of using the old inline skating rink (main photo) at the Potomac Community Center for its programs, which would allow all of the athletes to compete without difficulty do to their equipment.

Some of Pam Yerg’s players use crutches and walkers and "struggle through the ruts and grass and the mud" to be part of soccer activities and games.

"There is a tremendous need for this sort of amenity." — Gabriel I. Albornoz, Department of Recreation.

Yerg, who coordinates the TOPSoccer adaptive program and is the area director of Special Olympics MD-Montgomery, has been eyeing the dormant roller hockey rink at the Potomac Community Center for some time.

"We believe it holds huge potential value as a multi-sport facility for use by people in our county with disabilities," she said.

The rink could provide a safe, flat surface for people with disabilities who use assistive devices such as crutches, walkers, wheelchairs or prosthetics. It could be used for soccer, kick ball, T-ball, bocce and various other sports.

The county agrees and is currently considering how to move forward.

"There is a tremendous need for this type of amenity," said Gabriel I. Albornoz, director of the Department of Recreation. The county is currently researching the cost of converting the roller hockey rink.

A previous proposal for a public-private partnership for the center’s soccer field is now on hold.

YERG SENT her proposal to County Executive Isiah Leggett at the end of October.

"I don’t know if I would be talking about this if we were starting from scratch with the current fiscal situation," Yerg said. "When you have a facility already in place that is not being used it just makes sense."

She obtained estimates that substantiated her theory that the cost of demolishing and bulldozing the site and resodding the field would be comparable to the cost of resurfacing the rink.

"It’s an exciting opportunity," she said. "There are no other outdoor multi-sport and sports training spaces like this rink anywhere in Montgomery County, which is why we believe it presents a unique opportunity to serve some of the community’s most underserved citizens."

The Wounded Warriors program has asked the county for an inventory of accessible recreation facilities across the county, Albornoz said. With Walter Reed relocating to Bethesda, wounded warriors will be treated there.

He said the county wants to move forward as soon as possible, and needs to do a small parking study to ensure that parking lots have enough parking for people with disabilities and that the facility is ADA accessible. "We should have information by the spring," he said.

THE COUNTY HAD issued a Request for Proposals to develop a public private partnership for soccer and other uses in the area behind the Community Center. That RFP, issued before Yerg’s proposal about the rink, included demolishing the rink.

The county will wait until a determination about how to proceed with the rink, and then redo the RFP.

MSI was the only bidder on that RFP and the bid did not meet all of the county requirements. MSI and others will have an opportunity to bid on the new RFP in the future.