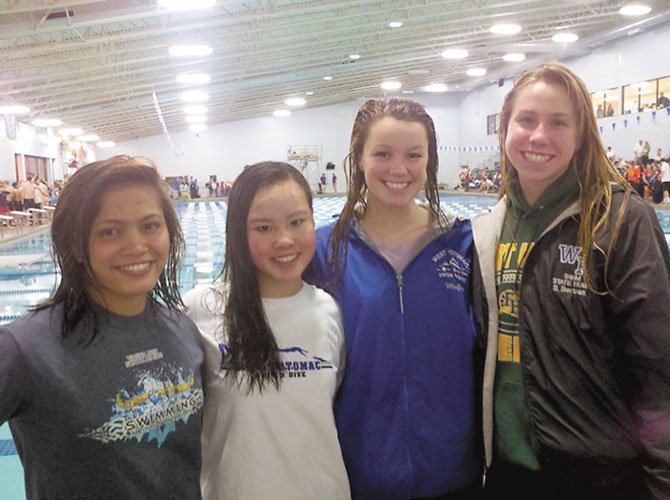 During the Patriot District meet, the Wolverine girls set two Patriot District records, won five of the swimming events, and recorded two 1-2 finishes on their way to a fourth-place team finish. The West Potomac boys finished sixth in the team scoring. The top six individual and relay finishers at the district meet automatically qualify to swim in the Northern Region meet, which will be held at the Oak Marr Recreation center.

Sophomore Sara Bertram placed second in both the 200Y individual medley and the 100Y butterfly. In the 200Y IM, Bertram’s state-qualifying time of 2:11.58 was just 0.25 seconds off the winning time of 2:11.33. In the 100Y butterfly, the top four girls were separated by just 0.58 seconds, with Bertram grabbing second place in another state-qualifying time of 58.69. Freshman Maxine Clifford, in her Patriot District championship debut, finished second with state-qualifying times in both the 100Y freestyle (54.01) and 100Y backstroke (59.63). In each race, the only swimmer ahead of her was one of her teammates, giving the West Potomac girls their two 1-2 finishes on the night.

West Potomac’s other first-place finish came in the girls’ 400Y freestyle relay, where the team of Bertram, Clifford, Doña, and Moffitt bested the field by more than 3 seconds with a state-qualifying time of 3:37.51.

The Wolverine girls had one more individual top-six finisher in sophomore Carolyn Murphy, who bettered her previous time by nearly 5 seconds to finish sixth place in the 500Y freestyle (5:36.83) and qualify for this week’s Northern Region meet. Murphy also placed ninth in the 200Y freestyle (2:06.03). The 200Y freestyle relay team of Carolyn Murphy, Melanie Bomberg, Kristine Pinter, and Maddy Bolger also move on to the Regional meet after their fourth-place finish (1:44.81).

In the boys’ meet, the Wolverines had one individual top-six finisher (and Northern Region qualifier) in freshman Michael Valceanu, who finished sixth in the 200Y freestyle with a time of 1:53.13. Valceanu was just outside a top-six finish in the 100Y butterfly, finishing seventh with a time of 55.61. Teammate and fellow freshman Will Rausch was the other top-finishing West Potomac swimmer, finishing seventh in the 100Y breaststroke with a time of 1:03.46. Rausch also finished 12th in the 200Y individual medley (2:13.12). Two Wolverine boys’ relay teams move on to the Northern Region meet by virtue of their fifth-place finishes at the District meet. The 200Y medley relay team of Trevor Jenne, Rausch, Valceanu, and Patrick Murphy posted a season-best time of 1:44.47 to advance to Regionals. The Wolverine 400Y freestyle relay team of Jenne, Jack King, Valceanu, and P. Murphy also posted a season-best time (3:29.19), moving on to compete at the Regional meet.

Several other West Potomac boys scored points for the team with top-16 finishes and personal best times. Senior Patrick Murphy was ninth in the 100Y backstroke (59.56) and 14th in the 200Y freestyle. Senior Trevor Jenne finished 10th in the 200Y IM (2:10.66). Sophomore Cyrus Adams-Mardi was 13th in the 100Y backstroke in a time of 1:02.85. The Wolverine boys’ 200Y freestyle relay of Adams-Mardi, Luke Perez, Niko Knoblauch and Jack King placed seventh.