Putting Food on the Table
Votes

Putting Food on the Table 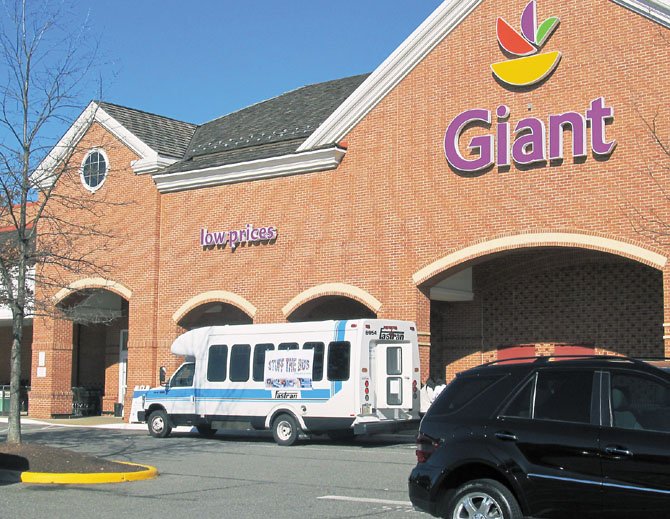 On a bright winter Saturday afternoon, bus driver Lynn Temple boxed up jars of peanut butter and cans of food donated by shoppers at Giant grocery store in Lorton.

"I had a woman come up to me this morning. She said she’s trying to feed seven people in her family, and she can’t get enough food from the local pantries," Temple said. "It just hurt me to hear that."

Temple is one of a dozen people who volunteered with Fairfax County’s "Stuff the Bus" campaign on Jan. 28, a county-wide food drive that parks FASTTRAN buses in Giant and Shoppers Food shopping centers to collect food for needy families and individuals.

While food pantries benefit from the seasonal dose of good will during the holidays, donations typically decrease during the first few months of the new year.

"There’s a high food demand now, but we are out of many basic items, like cereal, canned fruit and peanut butter," said Lynn Swogger, president of the Lorton Community Action Center (LCAC) Board. "We have a very giving community, especially around the holidays, but hunger is a need that doesn’t go away."

When food donations are low, Swogger said LCAC stretches what they have by putting fewer items in a food pack. "We still give out bags of food, but there may not be as many cans as usual." 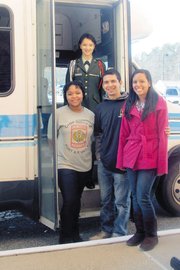 Hayfield High School Junior ROTC students volunteered for the Stuff the Bus food drive on Saturday, Jan. 28, at the Giant in Lorton. From left, Alyssa Huffman, Amber Ackerman, James Cardenas and Catherine Torres. "If there are people in need, then we have a duty to help them," said Huffman.

"Many of our families are working and struggling to maintain the basic needs for their family," said Andrea Tracey Cochrane, LCAC’s director of development. "They have to make hard decisions, hard choices. Do they pay for food or prescription drugs this month?"

Linda Patterson, LCAC’s executive director, said there is not one typical profile of those who need food.

"One never knows exactly who will need help from LCAC on any given day. Today, I met a young woman who was laid off two weeks ago. She had never before asked for assistance, but was in need of food and suggestions for employment," Patterson said, adding that LCAC gave the woman food and worked with her on a plan to get her back on her feet.

According to Alan Nicholas, LCAC’s food pantry manager, the organization gives out an average of 10 pounds of food each week per family just in non-perishable items, such as those received with Stuff the Bus, and an additional 10-20 pounds of meat, bread and vegetables per week. 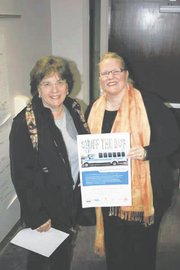 Roxanne Rice, executive director of Food for Others, and Sarah Allen, of Fairfax County Neighborhood and Community Services, show the "Stuff the Bus" poster highlighting the food collection drive that is taking place at local grocery stores now though Presidents’ Day.

"It’s safe to say that we distribute an average of 40 pounds of food to each family we serve on a weekly basis. We are currently serving an average of 175 families a week," Nicholas said.

Hampered by fewer donations in a slow economy, many nonprofits serving Fairfax County are struggling to provide food to increasing numbers of families in need.

"(The decline) is definitely noticeable in the winter," said Roxanne Rice, executive director of Food for Others, the largest direct distributor of free food in Northern Virginia. "It’s dramatic how much food comes into us in November and December, as opposed to the rest of year. "

Of the 2.7 million pounds of food that Food for Others distributed in 2011, 231,870 pounds was collected through food drives. Of that amount, 58 percent of it was donated in the months of November and December.

"The shelves always get bare this time of year. The big rush was in November and December, and then they will continue to go down," Rice said.

"Last Friday, prior to the Stuff the Bus drive, our pantry shelves were completely empty," Nicholas said on Tuesday. "The food that came in over the weekend is being distributed right now, and will be on tonight’s dinner table for those we serve in the Lorton community."

Last week, Fairfax County released a report prepared by the Department of Neighborhood and Community Services which provides a glimpse into food security and access issues in the Fairfax-Falls Church area. According to the Economic Research Service (ERS) of the U.S. Department of Agriculture, families experience food "insecurity" when the "eating patterns of one or more household members are disrupted, food intake reduced, because of lack of money or other resources." The report, which covers fiscal year 2011, showed that Fairfax County is home to more than 62,000 individuals who live below the poverty level - which is defined as an annual income of about $22,000 for a family of four - and another 86,000, who are just above the poverty level.

Highlights of the report:

In 2011 the Fairfax County Department of Family Services (DFS) received 17,703 applications for SNAP, an average of 1,475 new applications per month.

Nearly 90 percent of the households receiving SNAP benefits have incomes below the poverty level.

At Ecumenical Communities Helping Others (ECHO) in Springfield, donations have been steady, but ECHO’s food pantry contains 35 percent less than it did last year, according to executive director Meg Brantley.

At Our Daily Bread (ODB) in Fairfax, there is a steady waitlist for food assistance, and the number of requests for one-time emergency deliveries is up. More than half of ODB’s clients are children.

"We have 60 families on our Food Program, and generally about 60 on the waiting list to come onto the program," said Heather Webb, communications director for ODB.

While ODB’s pantry is still relatively full as a result of holiday food drives, Webb said that may not last for long.

"I would expect that by mid-March to early April, our pantry supplies will be low again and will remain somewhat low until the fall. That's the usual trend. We used to be low by February, though, so the Stuff the Bus initiative is helpful to get us through the coldest months," Webb said.

"Winter is when food pantries report that traditional giving is at its lowest point," Stevens said.

Local food providers, such as Our Daily Bread, FACETS and Food for Others, have become so concerned about the lack of food that they asked Fairfax County’s OP3 to help them network and collaborate to meet the growing demand.

"Providers wanted a way to network and collaborate. We facilitated the first meeting last week at the Government Center where more than 15 representatives from local nonprofits gathered to discuss needs and ways to collaborate," Stevens said.

Rice is co-facilitator of the group. "I do have great hope that it will allow us to talk about our experiences, best practices and needs and help …in all of our combined efforts to help hungry people in Northern Virginia," Rice said.

Stevens said the next meeting will be at Our Daily Bread’s new facility, and the group will be expanded to include faith based food pantries, which is expected to double the size of the collaborative group.

In the meantime, initiatives such as "Stuff the Bus" help to refill the coffers of local food pantries.

Last week, "Stuff the Bus" volunteers collected 1,746 pounds of food at the Fox Mill Giant in Herndon, and 2,158 pounds of food were collected at the Lorton Giant, according to Michael Artson with Fairfax County’s Neighborhood and Community Services.

"I wish those who donate could see the gratitude on the faces of families who receive our food. Our volunteers and staff see it daily, thankfulness that means that for the next few days the family will all eat," said Patterson. "Food, the ability to receive it, the ability to give it. It’s a basic human need that I don’t take for granted anymore."

The campaign continues this Saturday, February 4, from 9:30 a.m. to 4:30 p.m. at the McLean Giant, 1454 Chain Bridge Road, and the Clifton Giant, 5740 Union Mill Road. Proceeds will benefit Share and Western Fairfax Christian Ministries.

All donations will go directly to local nonprofit organizations that help feed needy families and individuals in the Fairfax-Falls Church Community. To find out when and where "Stuff the Bus" will be at a grocery store near you, visit www.fairfaxcountypartnerships.org or call 703-222-9764.