During an all-day casting call at Arena Stage at the Mead Center for American Theater in December, 120 young hopefuls from the D.C.-metro area turned up to audition for Meredith Willson’s The Music Man, which runs May 11-July 22, 2012 in the Fichandler Stage, directed by Molly Smith. From the open auditions, 19 talented young actors were invited back by Smith, one of them being a McLean resident Jamie Goodson, plays Gracie Shinn, the mayor’s youngest daughter, and is a seventh-grader at Cooper Middle School (Ford’s Theatre’s A Christmas Carol, The Kennedy Center’s Ragtime). 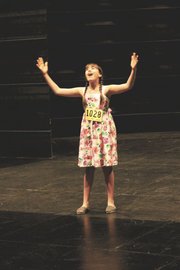 Jamie Goodson auditions for The Music Man at Arena Stage at the Mead Center for American Theater Dec. 10, 2011.

Goodson is a 13-year-old D.C. native who has been acting, singing, dancing, and playing the piano since age five. Her local credits include Ragtime at the Kennedy Center, A Christmas Carol at Ford’s Theatre, and 101 Dalmatians at Way Off Broadway Dinner Theatre. The past four summers, Jamie attended French Woods Festival of the Performing Arts in Hancock, N.Y., where she performed such roles as Clio/Kira in Xanadu, Mary in The Secret Garden, Pocahontas in Pocahontas, and Nala in The Lion King. Goodson attends Cooper Middle School in McLean, where she regularly performs the national anthem at local sports events.

For more information about The Music Man, visit arenastage.org/shows-tickets/the-season/productions/the-music-man/.