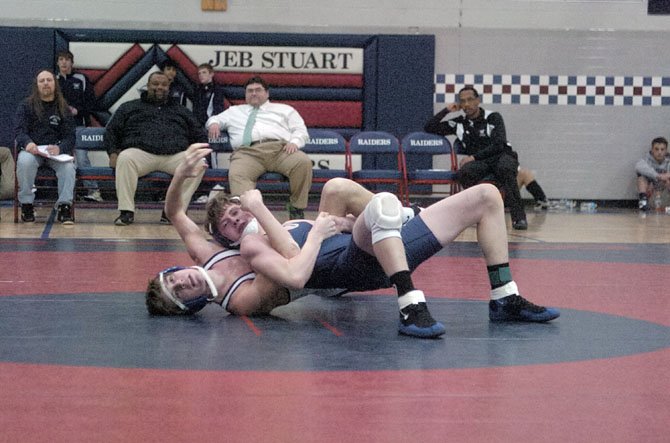 Falls Church — The Washington-Lee wrestling team’s "light guys" made sure the Generals were well represented at the 2012 National District tournament.

W-L finished runner-up to Mount Vernon, sending five grapplers to the finals and coming away with two individual titles on Feb. 4 at Stuart High School. The Generals had a wrestler compete in each of the first four finals matches, starting with the lightest weight class, 106 pounds. Mason Rockman (113) and Miga Khaadan (120) captured championships for W-L, while Narankhuu Ganbaatar (106), Jose Vasquez (126) and Jared Deiner (160) finished runner-up in their respective brackets.

"Overall, I’m pretty pleased with our performance," W-L head coach Derek Sweet said. "We came in here knowing we had a shot at the No. 1, but overall, a second place finish isn’t too bad. … Our light guys have been our strong suit. … Those guys have been our rocks."

Rockman, a freshman, pinned his opponent with 25 seconds remaining in the second period.

Sweet said Rockman’s success is the product of a strong work ethic.

"Mason, our freshman phenom right now, he’s been working his butt off all season, wrestling seven days a week and you can tell it’s paying off," the coach said. "… He’s got a very bright future. His neutral work I think is his weak point, but once he gets you down, he’s a cradle machine."

Khaadan, who also recorded a second-period pin, repeated as district champion for W-L. Deiner, whose record is 31-8, is the first 30-win wrestler in program history, Sweet said.