Students take the helm when Centreville High presents "Dramapalooza," its annual, one-act play festival. Show times are Friday, Feb 17, at 7:30 p.m., and Saturday, Feb 18, at 3 p.m. Tickets are $5 at the door. 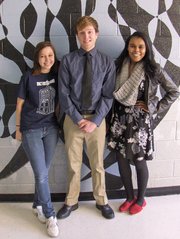 From left are Ashley Rosenstein, Daniel Lindgren and Sydney Battle of the play, "The Universal Language."

Four, student-directed comedies will be offered, as well as the school’s one-act competition piece, "Chamber Music." It will be performed last on Feb. 17 and first on Feb. 18.

Each comedy features a different type of humor. Presented will be "Nobody Sleeps," "Deliver Us Not (or Birth, Where is Thy Sting)?" "The Happy Club" and "The Universal Language."

"This gives the kids a perfect opportunity to learn what really goes into the production of a play," said Centreville Theater Director Mike Hudson. The directors, all seniors, choose their own plays with his approval. He also gives them guidance before they cast their shows so the students can direct them, themselves.

Technical-theater students are in charge of lighting and sound. Hudson observes auditions, casting and rehearsals. "The directors handle all the costumes, props and any scenery beyond the basics of what the school supplies," he said.

"They even approached the publishing companies to order the scripts and arrange to pay royalties on their productions," continued Hudson. "Scripts range from $6-$10 each and royalties average about $35 per performance; each director has to pay for these items, themselves."

Directing "The Universal Language" is Sydney Battle. "It’s about a con man who invents his own language so he can teach it and make money quickly," she said. "His first client is a shy girl and, while teaching her, he ends up falling for her."

Daniel Lindgren plays the con man and Ashley Rosenstein is the student. Colin Mehaffey has a cameo role. Mehaffey and David Kilpatrick are the stage managers. The actors started rehearsing in early December, and Battle says things are going smoothly.

"They have a lot of chemistry and play off each other well," she said. "About 70 percent of the play is in this fictional language so, by the end, I hope the audience will understand some of it and get a laugh out of it."

Battle called directing "a lot more difficult" than she expected it to be "because you’re in control and it’s your final product. It’s a lot of work, but I’m enjoying it. I like not having to memorize any lines, and it’s nice being able to see the play from the outside to know what works and what doesn’t."

"Nobody Sleeps" is directed by Emily Dwornik. "A robber enters a home in the middle of the night and is surprised to find it inhabited by a quirky family of females," she said. "There are three teen-age girls and their mother. This play’s a little bit goofy and cheesy, but that’s what makes it endearing."

Kent Clingman plays the robber, Emma O’Brien is the mother, and the daughters are Carly Eads, Ashley Leightley and Stephanie Rathjen. Tommy Reynolds is the stage manager.

"I’m in love with my cast," said Dwornik. "They’re all very talented, to begin with; but it’s nice to see them grow through the rehearsal process. I like being the one to help them develop and seeing them blossom as actors. I let them make their own decisions, see what their ideas are and combine them with my own vision."

Although she’s an actor first, Dwornik’s also in a tech class, so directing lets her take her acting experience and merge it what she’s learned about a play’s technical aspects. "I had no idea how much work it would be, but now it’s a new passion for me. It’s something I have to do, and I enjoy it very much."

Kelly Strauch is directing "Deliver Us Not (or Birth, Where is Thy Sting)?" With an unusual premise, the play is about a trio of male fetuses in a womb discussing life after birth the way people discuss life after death.

"They all have different ideologies — one’s agnostic, one’s an atheist and one’s and existentialist," said Strauch. "It’s a universal womb, not a particular person’s. There are a lot of puns and word play, which attracted me to this play originally. I saw it performed in a competition, a few years ago, and it was so funny that it stayed with me."

Playing the fetuses are Keegan Collins, Joshua Ewalt and Arjun Rao; Nick Dell’Omo is stage manager. Now that they’ve learned their roles, said Strauch, "They’re focusing on bringing out their characters and some of the less-obvious humor. And over the years, the shows that work best are the small-cast comedies."

She said that since the subject matter is so unexpected, "It allows people to look at themselves and reflect on their own fears about death and life. And directing’s really cool because I have a lot of control over things I wished I could control … as an actor. But I also lose some of that control to my cast because the actors get to make their own choices about how their characters should act."

To do her job well, said Strauch, she pulled elements from her past and present directors, plus previous student directors. She said doing so helped her discover how to get the cast "to best interact with each other to bring out each person’s talent."

Directing "The Happy Club" is Christa Guh. "It’s about two people trying to cheer up a mopey person," she said. "They try all sorts of things, like happy dances, cheering her on and rapping."

Binta Barry portrays the sad girl, and Connor Gilooly and Hailey Knapp are the people hoping to improve her disposition. Stage manager is Chris Bond. Guh said rehearsals are going well. "I like that the actors have questions, so [it means] they’re always trying to get better."

As for the play, Guh wants the audience to find it "socks-knocked-off hilarious because it’s so outrageous and out-there. I’m hoping they get the humor and think it’s funny and entertaining."

She says it’s interesting being a director, instead of an actor. "I’m the one calling all the shots," she said. "I have a vision for the play and others act it out for me. However, there are definitely a lot of small aspects, like music and props, a director has to think about that an actor doesn’t. Directing’s fun, but I like being an actress best."

Centreville performed "Chamber Music" for the Virginia Theater Association in October and for the VHSL one-act competition, Jan. 30. It’s an absurdist play about eight women at a meeting, and the audience eventually realizes these people are in a mental institution.

"They believe they’re historic characters, such as Queen Isabella of Spain, Mozart’s wife, Joan of Arc, Gertrude Stein and Amelia Earhart," said Hudson. "It’s a delightful twist on history that will surprise the audience."