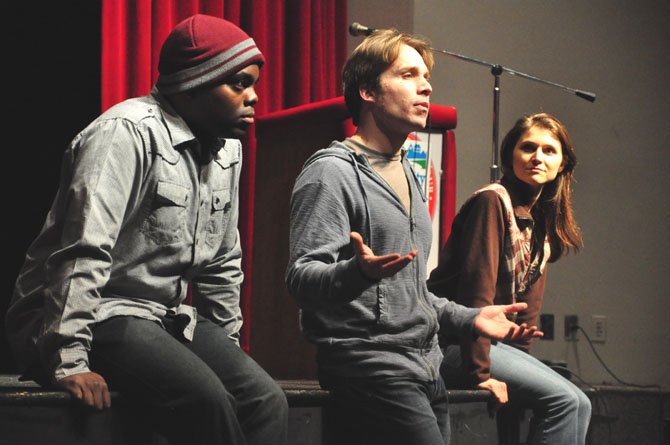 McLean — Teenagers are often given statistics and lectures about what constitutes dating abuse, but the Feb. 9 program "What’s Love Got to do With it: Healthy Relationships and Dating" at McLean High School addressed the problem from a number of different angles.

The event, which was a joint effort between the Safe Community Coalition, the McLean High School, Langley High School, Thomas Jefferson High School for Science and Technology PTSAs and the Madeira School, began with a performance by Deana’s Educational Theater.

"The play is to help people recognize the warning signs of abuse early on," said Amie Cazel, an actress with the group who plays the victim of dating abuse in the play. "People assume that it’s young love, that maybe it will be crazy, but there are red flags that indicate very serious problems."

Actor Casey Preston played a friend of Cazel and Kervin Germain played her abusive boyfriend. Preston interjected during various portions to discuss what the audience was seeing.

"I thought the play, which presented realistic scenarios of what dating abuse starts as and can turn into, was very valuable for our teens to see," said Henrietta Blank, parent of an Arlington County high schooler. "Teenagers are used to drama in relationships, but like the play pointed out, there is a point where it becomes dangerous to those involved, and I hope if anyone in the audience saw something familiar during the performance, that they know it’s not acceptable behavior."

Through Preston’s use of his remote control during the play, and with suggestions from the audience, he was able to help his friend avoid any serious consequences.

THE SECOND PART of the program presented the harsh reality of the consequences of dating abuse, featuring Lynne Russell, mother of Siobhan Russell, who was murdered in April 2009 at age 19 by her ex-boyfriend. Lynne Russell, of Oak Hill, founded Dating Abuse Stops Here in response to her daughter’s death.

"We overestimated her ability to make a choice to leave the relationship. We now know from statistics that it takes about seven attempts for a person to break free from an abuser. It also takes a great deal of courage and a great deal of support," Lynne Russell said. "Teen victims of dating violence are more likely to smoke, to use drugs, engage in unhealthy diet behaviors, engage in risky sexual behaviors or to attempt to consider suicide. The toll to our society is tremendous."

Tania McCaffrey of Falls Church said Russell’s story made her determined to keep her eyes open for signs of abuse.

"To hear what she went through, and what happened to her daughter makes me sick to my stomach, but I really admire her for using that tragedy to reach out to communities like this about what we can do to prevent it in the future," she said. "I know I’ll be keeping a closer eye on my daughter and try and keep the lines of communications open as much as possible. I know there’s a line between caring and prying, but I’d rather occasionally step over it than let any kind of abuse go unnoticed." 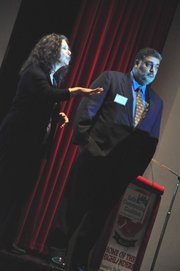 Wiseberg recommended that parents always be vigilant to the moods of their children, and while it might be a delicate matter, discussing concerns should be a priority.

"When you see trouble, you need to stop and have a conversation. Probably not that night, but the next day, say ‘I noticed you were unhappy when you came home from your date, and you just don’t seem happy right now,’" she says. "Let them know you can talk, you can listen. Calm your own anxiety as an adult, and then come back to it."

Speaking from his experience as a surgeon, Basiouny said the results of abuse he sees only represent a small portion of the abuse actually occurring.

"At Fairfax Hospital last year, we had 700-800 domestic violence assaults that happened in our community. Of those, 250-300 were associated with individuals under the age of 21, and more than 80 percent of those had a rape kit involved, which is what we do to screen for rape," he said. "It’s important to recognize that these are just people who felt they had to come to the hospital, so that’s probably only about 20 percent. The rest don’t reach that point, so they don’t report it."

PARENTS who attended said they were impressed with the scope of the event.

"I think they did a great job of approaching the problem from every aspect, from the teenager to the adult, to the person being abused to the person witnessing it and even from a mental and physical standpoint," said Charles Palck of McLean. "It’s just one of those things that would be great to pretend doesn’t happen, but that’s not an option. Ignorance is not an option for us, our community and especially our children."

Preston, who has performed a variety of shows around the country, said "this is one of the more impressive events I’ve seen, and I wish more things like this occurred."