Making Their Mark at McLean Project for the Arts
Votes

Making Their Mark at McLean Project for the Arts 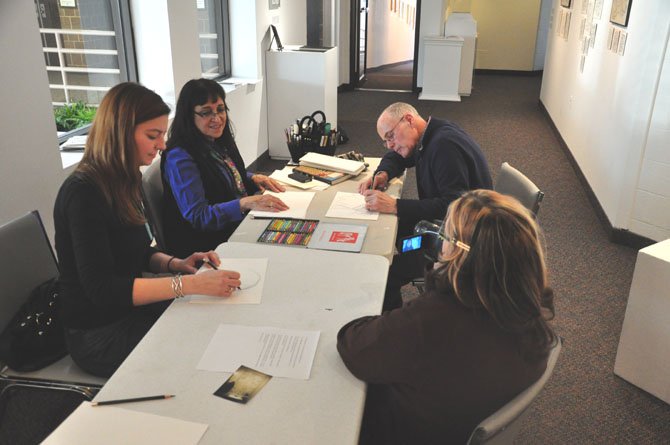 From left, Tamryn McDermott, Renee Sandell, Michael Gross and Paras Kaul attend part of Sandell’s McLean Project for the Arts Exhibit. Sandell, whose work will be on display until March 4 at the MPA Gallery at the McLean Community Center, is hosting Thursday gatherings this month to get feedback and contributions to her latest exhibit.

McLean — Artist Renee Sandell is all about making her mark. In fact, she believes most of life is about people making their marks. That’s one of the reasons she has invited the community to participate in her exhibit, "Marking and Mapping: Finding Time, Space and Place," currently on display at the McLean Project for the Arts at the McLean Community Center.

"When you make your mark, it’s the most profound thing you can do, and sharing it is important," Sandell said. "We live in an amazingly participatory world, but sometimes people think of art as something that’s passive, it just hangs there on the wall, but art has layers that need to be peeled back like an onion." 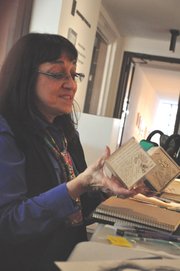 Artist Renee Sandell shows some of her early works at the McLean Project for the Arts Gallery Thursday Feb. 9. Sandell is hosting weekly gatherings at the gallery this month for people interested in participating in her current exhibit.

Sandell has welcomed community members to participate in her exhibit every Thursday this month at the McLean Project for the Arts, and will continue to welcome people Feb. 16 and 23 from 3 to 4 p.m.

PARTICIPANTS come to speak with Sandell about her philosophies on art and to begin a work of their own, using a simple blank piece of paper and whatever tools Sandell brings in. She hands guests a piece of paper, and sends them on their journey.

The first week she had people write their name on an index in a way that made it personal.

"I thought it would be good to start with something everyone knows how to draw, letters, but then to find a way to fill the space around it," Sandell said. "And if you make a mistake, you turn it into something. I want these pieces to turn into conversations that inspire others to make their mark."

Some attendees have been first-time artists, others were much more experienced.

"I like the notion of just starting off with a blank slate and seeing where it takes you. I think that’s an especially important lesson for young people, to just get started and see where it goes," said Michael Gross, an artist from Bethesda that attended Sandell’s Feb. 9 session. "I wasn’t sure what to expect when I came here, but I’m glad I didn’t have to work with a small card, I found I had a lot more to put down than would have fit." 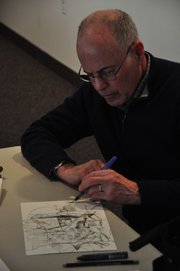 Artist Michael Gross works on a piece at the McLean Project for the Arts Gallery Thursday Feb. 4. Gross was one of several to participate in artist Renee Sandell’s latest exhibit at the MPA Gallery, which includes weekly contributions from the community.

Tamryn McDermott, an art teacher and student of Sandell’s, said the experience spoke to her as both an artist and a teacher.

"A lot of what she said resonated, because a lot of what you do as a teacher is to get student to make their own decisions, allowing them to be comfortable," she said. "The goal is to make them think differently about the art process."

Sandell says one of the things that excites her most about community participation in this project is the "nexus of creating and appreciating art."

For those who are unable to attend one of Sandell’s sessions, a large poster is attached to a wall outside the McLean Project for the Arts gallery with a collection of markers next to it. People are invited to come and make their own contribution to the poster.

SANDELL’S EXHIBITION will be on display at the MPA until March 4. More information can be found at www.mpaart.org.