McLean Project for the Arts curators select works from their favorite artists for a golden anniversary exhibition. 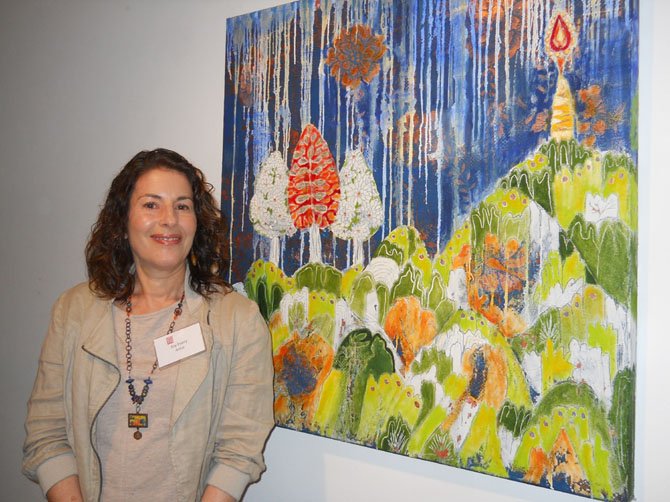 Artist Joy Every with her acrylic and oil painting titled "Beacon." Photo by Lori Baker.

McLean’s reputation as a trailblazer in the world of art is little known. It has the distinction of hosting one of the longest continually-running nonprofit art centers in the Washington-area, the McLean Project for the Arts. The MPA is also the first public-private partnership in the arts in Fairfax County.

But to those familiar with the history of MPA, this is only a small part of what makes the art organization special. Nancy Bradley, one of six women who founded the organization fifty years ago, and who is its only surviving founder, joined former curators, its current curator, numerous art lovers, artists and MPA supporters last week to celebrate the 50th anniversary of the McLean Project for the Arts.

"A bunch of us were studying art at American University," said Bradley, "finding places to show our paintings. And we said there ought to be a place in McLean, which is growing. It’s a cultural dessert. We could have a gallery if we got a little money together and rented a space, and we could invite artists."

That’s exactly what the group did. They rented the basement of what is now the Salona Village Shopping Center. They had to go through the back alley and down the stairs to access the gallery. But as Bradley said, "it was a nice big space."

THE YEAR WAS 1962, and the gallery slowly grew. In the late 1960s, the group started a membership program. That was one of the turning points, according to Bradley. People paid $30 per year to join. "There was a period of time, if I was at a cocktail party, I was out selling memberships to the gallery," said Bradley. "People hated to see me come in," she laughed.

The MPA moved eleven times before it finally found its permanent home in the McLean Community Center. "It’s just been fascinating to see the vision and dedication that this group, the board members and the first founders, have brought us here today," said Nancy Perry, Executive Director of the MPA.

Though the MPA has been celebrating its anniversary all year, Perry called this exhibit which opened last week, its premier event. The exhibition titled "Four Perspectives: Becoming MPA," features artists selected by three former curators and the current curator. It will run through June 2.

Nancy Sausser, current curator at the MPA, said that for the 50th anniversary exhibition, the task was to "figure out a way to honor all of these wonderful artists who have shown their work in our spaces over the years. And what better way to do that than also to honor this incredible lineage of curators that we have."

Andrea Pollan was the first curator for the MPA, and served there for ten years. She selected a few artists that she had worked with closely, who might be open to an "unorthodox presentation." She wanted to avoid the "yet another group show" presentation. The "unorthodox presentation" refers to her collection which is displayed in a playful, yet respectful way. Some of the works she chose included pieces by Ken Ashton, Kendall Buster, Susan Eder, Helen Frederick, Tom Green and Brandon Morse, among others.

One piece in particular, an extreme close-up of an individual which the artist, Jason Horowitz, calls "Lady Sofia Karrington Bouvier No. 3" is indeed, as Pollan describes it, "a very confrontational but amazing piece." It stops you in your tracks.

Sarah Tanguy served as curator for the MPA from 1996 to 1998. During her tenure, she enjoyed being able to "experiment with artists and themes. And no one saying that you can’t do that, it’s too weird."

When Tanguy was asked to take part in the anniversary show, she immediately thought of late artist Don Cook. Before he died, he had given her an acrylic on canvas piece, titled "There is a Zone." And she knew right away that she would use that as a theme for this exhibit. The theme centers on the contrasts between the realm of ghosts and the living, and light and shadow. All five of the artists that she selected deal with those concepts. The artists that she selected include Donald Cook, Michael Platt, Tanja Softic, John Ruppert and Colby Caldwell.

Former curator, Deborah McLeod, didn’t start with a theme for her anniversary exhibition. But in assembling her collection, one soon evolved. She selected artists whom she "personally loved." The pieces she chose happened to represent nature or "philosophies that we need to care for and protect."

McLeod’s collection includes works from Elsabe Dixon, Pat Goslee, Rebecca Kamen, Isabel Manalo and Betsy Packard and Craig Pleasants, to name a few. She said that her collection calls to mind the Ray Bradbury story, Fahrenheit 451, in which the protagonists are determined to save books from being burned in a "futurist age of suspicion and intolerance."

CURRENT CURATOR, Nancy Sausser, selected pieces for her exhibit based on the challenge of showing in the Ramp Gallery. She only considered artists who had previously shown in the Ramp Gallery, since it is a unique space, with specific challenges. "All of the artists who are in the show are really meant to be there for some reason," she said. Sausser’s collection includes works by Solomon Wondimu, Joy Every, Jeffrey Smith, Gretchen Schermerhorn, and Michael Mendez.