MPA Paints in the Park
Votes

MPA Paints in the Park 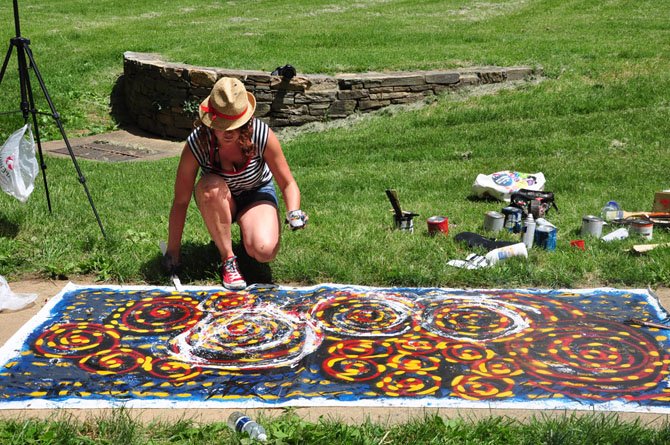 Artist Christine Walters works on a piece in McLean Central Park, as part of the McLean Project for the Arts’ "Painting in the Park" event Sunday, June 3. Photo by Alex McVeigh.

McLean — As part of their celebration of 50 years in existence, the McLean Project for the Arts hosted a "Painting in the Park" exhibition Sunday, June 3 in McLean Central Park. The community’s youngest artists were invited out to help make cupcakes out of clay and other crafts, while the professional artists were invited to take advantage of whatever inspiration the clear, sunny day had to offer. 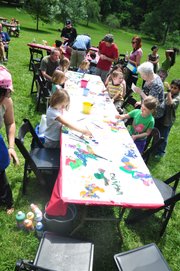 Artist Christine Walters works on a piece in McLean Central Park, as part of the McLean Project for the Arts’ "Painting in the Park" event Sunday, June 3.

"This event is to cater to all art lovers in the community," said Nancy Perry, president of the MPA. "This highlights both sides of our mission, to work with professional artists in the community, but also our educational programs for anyone with an interest in art."

THE MCLEAN COMMUNITY CENTER underwrote the event, and local sponsors helped put it on as well. Abrakadoodle, who hosts workshops with the MPA, as well as TTR Sotheby’s International Realty and Dodge Chrome helped support the event, while Cortina Productions and Lola C. Reinsch and J. Almont Pierce are sponsoring the anniversary activities.

"The McLean Project for the Arts is simply one of the best organizations in McLean, and we support their efforts to get art into the community," said Derrick Swaak, COO and partner at Sotheby’s.

His wife, Amy Swaak, helped plan the event. She serves as director for MPA’s annual ArtFest, which takes place in October in McLean Central Park, so she was familiar with the park’s logistics.

"We wanted to do some one-time, extra events to celebrate the anniversary," Amy Swaak said. "It’s open to the public and free, we just wanted people to come out and express themselves however they see fit."

Children were able to set up on tables just outside the park’s gazebo for their projects.

"I liked making a clay cupcake best, because most of the time when you make a nice decoration for a cupcake, you eat it, and it’s gone," said Morgan Rose, 9, of McLean. "But this one is here to stay."

Board member Joe Wetzel said the event was representative of the kinds of artists the MPA is trying to reach.

"We run classes throughout the year for all ages, from the littlest artists to the grown ups," he said. "Lately we’ve been getting a much broader reach with our instructors, and Abrakadoodle has helped reach the young people, so we’re in a good place."

Elsewhere in the park, several artists set up shop to work on whatever struck them. Jill Banks, who lives in Reston and teaches at the Great Falls School of Art, came because she thought it would be a good opportunity to expand her horizons.

Artist Jill Banks works on an open-air painting of the playground at McLean Central Park Sunday, June 3. Banks was one of several artists who came out for the McLean Project for the Arts’ "Painting in the Park" event.

"I just started doing plein air (an expression meaning ‘in the open air’) work, I usually don’t like the heat or the bugs, but I figured I could handle it," she said. "I got a little bit of a late start, I couldn’t decide between the gazebo and the playground area, but I decided I like the playground colors a lot more."

Banks spent a little more than two hours watching the playground and hoping the people she included in her painting stayed still long enough for her to get a clear picture.

ON THE OTHER SIDE of the playground, artist Christine Walters created an abstract piece on a nine by four-foot canvas.

"With this series, I’m doing all outside, and I’m trying to incorporate elements of the landscape into the piece," she said. "The last one I did was in a parking lot, and I mixed in some gravel with the paint to create a gritty, urban texture. This time I mixed in a little grass from the park."

Walters plays music while she works, and often paints right along with the beat of the music.

"This is sort of what I imagine a song would look like visually, with the sound waves and little dots that correspond to the rhythm," she said. "I work only in primary colors, and red and black are my favorites. I love to layer them."

The McLean Project for the Arts hosts educational programs for artists of all ages, and maintains a gallery space on the second floor of the McLean Community Center. More information is available at www.mpaart.org.