In 1946, World War II was over and men and women in the armed forces were returning home, some to the hugs of spouses and children, others to parents and siblings. Mayo Stuntz, born and raised in Vienna, was one of those young men returning as an eligible bachelor.

Close family friends in Falls Church were eager to introduce the 31-year-old veteran to nice young ladies. When Stuntz showed up at "Aunt" Bess’s house, Connie Pendleton was there visiting.

"When I first saw Connie in that dining room, I thought, ‘well, she’s attractive,’" said Mayo Stuntz. Connie played piano and they talked and got to know one another.

After graduating from Duke University in 1944, Connie worked for the U.S. Army Signal Corps in Washington, breaking Japanese codes. She was still with the department when she met Mayo. Not knowing how to reach her, he sent a postcard addressed to her at Duke even though she had graduated two years earlier.

"That’s how I knew he was interested in me," said Connie, eight years younger than Mayo. "Even though I had graduated and left, he tried to contact me."

Connie and Mayo Stuntz were married on Feb. 8, 65 years ago, in The Falls Church. Connie remembers the weather – it was icy – and that no siblings were available to make it to the wedding. They were all out of the country. After they wed, Connie and Mayo moved into the Stuntz family home, "Merry Go Round," on Rt. 123. By then, Merry Go Round was subdivided into four apartments, and the Stuntzs lived on the lower level, maintaining the residence.

"When I was growing up, getting married and raising a family was the most important thing a couple could do."

The Stuntzs had four children, one of whom, their first, died at two years old. Now, they have eight grandchildren, including two married ones.

THEIR MARRIAGE has been one of travel, writing books, and, even, shared careers. In 1955, the Stuntzs moved to Japan for two years while Mayo worked for the CIA under cover of the U.S. Army. They socialized with American and Japanese friends there, with Connie calling their time in Japan "exciting" and "wonderful." 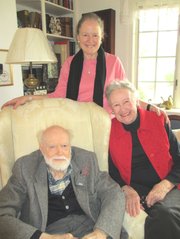 Mayo and Connie Stuntz, in their Vienna home, with daughter Anne, president of Historic Vienna, Inc.

Throughout their lives together, they shared travel throughout the world, and when they opened an antique shop in the basement of Merry Go Round, they bought antiques together as they traveled.

"In England, Scotland, it was a lot of fun picking up things for our shop," said Connie. "In England, we filled up a car with antiques to bring home."

It helped their travel planning that the Stuntzs had a son who worked for American Airlines, granting them travel privileges.

Mayo Stuntz, in the 1960s, set out to photograph every house on Rt. 123 between Tysons Corner and Oakton for posterity. The dream eventually became a collaboration as Connie was drawn in to do the historical research for the book known as "This Was Vienna." It was an eight-year research project and in 1987, "This was Vienna" was published. Together, Connie and Mayo produced "This Was Tysons Corner," published in 1990, and "This Was Virginia," published in 1998. "A View of Falls Church," by Connie Pendleton Stuntz, was published in 2005. Not one to sit idle, Connie Stuntz is researching for yet another book.

The Stuntzs celebrated their 65th anniversary in a private room at Maggiano’s at Tysons Galleria, surrounded by family members. Each guest stood up to share a recollection of Connie and Mayo. The two grandchildren not present sent their remarks to be read by others. That is what touched Connie Stuntz the most, the shared thoughts and remembrances.

When you ask Connie and Mayo Stuntz what made their marriage work through the loss of a child, international relocation, and the busy-ness of juggling multiple careers and avocations, they are not at all perplexed by the question. Connie has told daughter Anne that, from her point of view, the secret to the strength and durability of their marriage is that they are each so proud of each other, and that family always came first, that they were both devoted to their children.

"I think we took it seriously," said Connie Stuntz of their lifelong commitment to each other. "When I was growing up, getting married and raising a family was the most important thing a couple could do."

THE STUNTZS AND PENDLETONS knew one another before Connie and Mayo had ever met, and Connie said that Mayo seemed "right" for her. "He felt the same way about me," Connie said.

"We wanted our marriage to work. It was real important to both of us. We were equally-strong. It has to be even in a marriage."

Her husband’s assessment of the strength of their marriage had elements that were simultaneously humorous and reflective. "I did what Connie told me to do," said Mayo. "It was a lot easier to do than arguing.