‘Coming to America’ at Robinson Middle 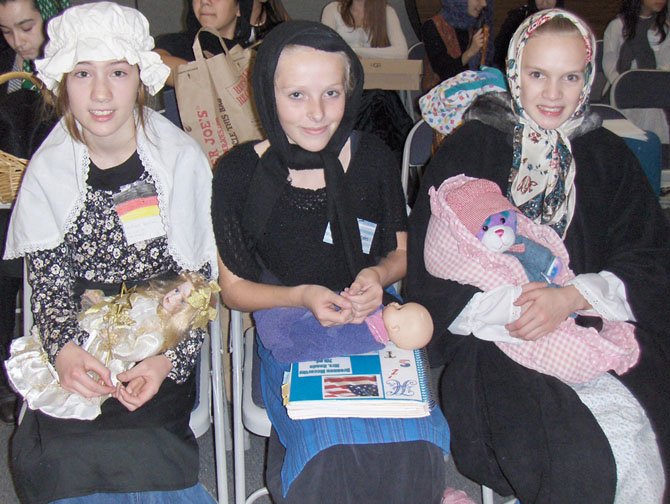 It’s one thing to read about history in a textbook, but another thing entirely to experience it "firsthand." And 550 seventh-graders at Robinson Middle School did that recently, simulating what immigrants went through at Ellis Island at the turn of the 20th century. 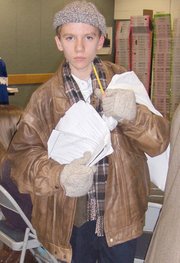 Students were given character identities – their names, ages, genders, countries of origin, education, whether they had children or disabilities, and economic status – most were poor. Then they dressed in costume and – in a room transformed into Ellis Island – they went through six stations, answering questions and taking tests before they could enter the U.S.

The two-day event is part of the history SOLs. "It’s also a really important topic in an era of modern immigration," explained U.S. History teacher Susan Reade, middle-school Social Studies Department chair. "Our message to the students is that we’re all immigrants, with a history and legacy of immigration. Whether it was last week or on the Mayflower, we all came from somewhere else."

The event was based on class discussions and library research. At the outset, with a replica of the Statue of Liberty in the background, some students sang and danced to Neil Diamond’s rousing song, "America." Then, to give the students an understanding of citizenship and a framework for the exercise, Reade told them why people left their home countries and discussed their travel conditions.

"They got pushed out of their home countries," said Reade, the middle-school Social Studies Department chair. "Things were bad enough for them to leave everything they knew to start over in a new country. The Jews, in particular, fled religious persecution; others left because of government oppression, to avoid required military service, or because of starvation – the potato famine in Ireland. They also came for opportunities to get an education, a better job and land, and to escape poverty." 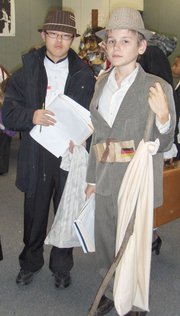 (From left) Peter Shin (Poland) and Matthew Lynch (Germany) wait in line for medical inspections. During the simulation, the "doctor" gave them a "shot" and had them do some exercises.

Millions of people left their homes and relatives. "They were the very best workers – highly motivated and energetic people willing to take risks," said Reade. "This is our legacy; these are our relatives, and their strength is what built the United States."

THE FIRST WAVE of immigrants came from Northern and Western Europe. "Most spoke English and were Protestant so they blended in easily," said Reade. "Industrialization begins and the Homestead Act is created. Ten million people immigrated before 1890."

The second wave of 15 million people came between 1880 and 1910. "Only assembly-line jobs were available and there was no more free land," said Reade. "U.S. workers thought the immigrants would take away their jobs, so they met them with discrimination and anger."

When Ellis Island opened in 1892 to welcome and process immigrants, immigration increased. But it declined sharply in 1914, at the start of WWI, as the U.S. wanted to keep out the immigrants and their problems.

To make the immigration experience more realistic for Robinson students, they were loaded down with luggage and clothing as they entered "Ellis Island." As they boarded ships to America, people carried all their clothes and possessions with them, Reade said.

"The richest people traveled in style; poor people traveled in steerage to save their money to live in the new country," she explained. "They had no windows or fresh air and little food. People got seasick, and there was one toilet for 500 people for the two-week journey." 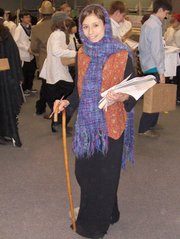 Rich people went straight to New York; the rest went through Ellis Island. Still, said Reade, as they approached the U.S., "They were greeted by Lady Liberty, representing a welcome to the immigrants who wanted freedom and were willing to work hard for a better life. They came for their dreams."

DURING ROBINSON'S SIMULATION, students went through a legal inspection, giving their personal information. During the medical exam, they disclosed any disabilities they had, read an eye chart and were checked for lice. At the mental-health station, their hand/eye coordination was tested.

At the vocations area, their documents were stamped to identify them as either skilled or unskilled workers, depending on their education. At customs, they learned what was permissible to bring into the country; and at the departure center, they took and Oath of Allegiance to the U.S.

The students were also crammed in large groups into a cardboard "tenement building" to give them a feeling of the crowded conditions in which the immigrants lived in America. Each student wore a tag containing their character’s name, information, personality and abilities.

Wearing a scarf on her head and walking with a cane, Auria Pritchard portrayed a 52-year-old woman from Greece. She said the simulation was "sort of like being at Ellis Island. We actually get to experience it and feel how it would be."

Carla Abril portrayed a 37-year-old Polish Jew, Marta Levitsky, who left Poland so she could have religious freedom. She brought her 4-month-old baby girl, Melissa, with her.

Carla said it was a bit confusing, walking around the processing area at Ellis Island. It was also tough being an immigrant, she said, because "People would discriminate against you. They’d yell at you and try to destroy your things." She said the Ellis Island simulation was a good idea to learn about immigration because "Instead of just reading about it, you can see what the immigrants were doing and how they felt about it."

Teacher Catherine Rodriguez called it "An amazing, educational opportunity for the students to experience Ellis Island and immigration. Being able to learn this in a more firsthand format brings the process to life for them – and they also get to dress up and do activities. We gave them guidelines about their characters and they created their own costumes."

Portraying a 19-year-old Russian immigrant, Jerry Grimes is at the vocation table with history and civics teacher Catherine Rodriguez, while other "immigrants" are processed in other portions of "Ellis Island."

Playing a 33-year-old candymaker from Germany was Eusebus Hershey. "It’s very cool because you get to see how immigrants got here back then," he said. "I was surprised that they asked me questions about where my ‘children’ and ‘wife’ were." Eusebus said his character was jailed three times in Germany for domestic problems, but hoped to start a Catholic church in America.

Natasha Duarte portrayed Greek immigrant Athena Stavropoulous, 19. The information on her tag said she had a limp and was of moderate strength, and Natasha was enjoying the activity. "It’s fun because you get to go through Ellis Island and it’s hands on," she said. "It helps you feel you’re a part of history so you can understand better how immigrants were treated then and how it was, in general."

Tanner Uffelman played a 17-year-old Russian Jew named Nicholas Bulatkin, whose tag described him as having a kind and positive personality. "He left Russia because he was being prostituted and persecuted because of his religion," said Tanner. "He wanted to get a job working with animals."

Tanner said his character carried luggage containing his clothes, plus books and photos of his family. "It’s fun seeing what they did at Ellis Island," he said. "And it’s cool dressing up."

Afterward, Reade praised the efforts of her fellow, seventh-grade, U.S. History teachers who worked hard to make the event such a big success. Lesley Minai created the tenement, John Perriello ran the detention center and Jeannie Lesko checked the "immigrants" skills as related to their job potential. Mark Southworth dressed as a doctor gear to "examine" the immigrants, Sharon Hockenbury created a mental health and IQ testing center, and Rodriguez helped both before and during the simulation. And both Minai and the school librarians coordinated the research.

"This took a great deal of preparation and planning," said Reade. "But we all wanted to make this a very memorable event."