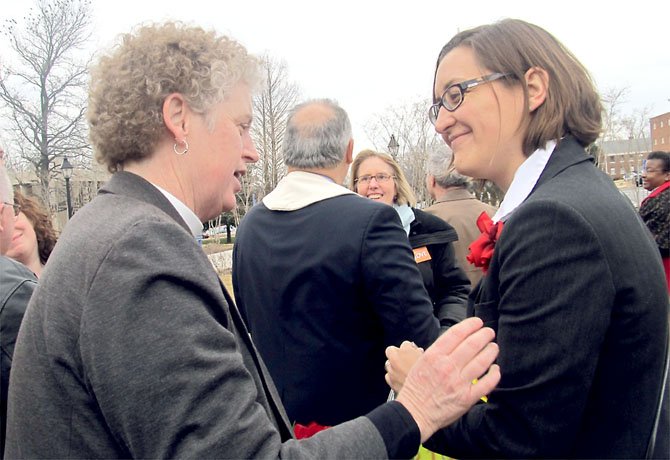 Holding red heart balloons and handing out candles and flowers, nearly 200 guests gathered in the shadow of the historic Fairfax County Courthouse to celebrate the union of a one couple on Valentine’s Day.

The Rev. Karen Rasmussen and Barb Brehm - longtime Fairfax residents who are both retired Navy veterans and have been partners for 26 years – were at the courthouse to apply for a marriage license.

"I remembered the ring," Rasmussen said, holding it up to the crowd who laughed and applauded. 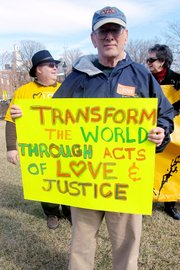 The scene played out the way the participants knew it would. But the rejection didn’t dampen the mood of the crowd.

"Of course we are disappointed," Rasmussen said, holding Brehm’s hand.

"But the clerk was very gracious. He didn’t have a form that said ‘bride’ and ‘bride.’ Maybe next time it will be yes. We will invite you all back when we get a yes," she said, as the crowd cheered.

MORE CELEBRATION THAN PROTEST, the event was organized by People of Faith for Equality in Virginia (POFEV) – a statewide interfaith organization of clergy and laypersons committed to achieving full equality for Lesbian, Gay, Bisexual, and Transgender (LGBT) Virginians - together with the Unitarian Universalist Congregation of Fairfax (UUCF). 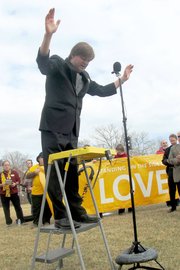 The Rev. Scott Sammler-Michael, senior minister of the Accotink Unitarian Universalist Church in Burke, led a crowd of about 200 people in prayer and song during the event supporting marriage equality held at the Fairfax County Courthouse on Valentine’s Day, Feb. 14.

Participants sang civil-rights era songs, listened to several impassioned speeches by local and national clergy, and held a candlelight vigil to protest discrimination of lesbian, gay, bisexual and transgender families. To the surprise of several participants, there were no counter-demonstrations or confrontations.

"I think this is a matter of visibility and awareness. It’s important that people know a lot of ordinary people right here in Fairfax County support marriage equality," said Catherine Read, who sits on the board of Our Daily Bread, a Fairfax nonprofit that provides food and other essential services to those in need.

"We are here to stand in support of loving lesbian, gay, bisexual and transgender couples who cannot legally obtain a marriage license in the Commonwealth of Virginia," said the Rev. Peter Morales, president of the Unitarian Universalist Association (UUA).

Attending the event from his home in Massachusetts, Morales said the Bay state - the first U.S. state to issue marriage licenses to same-sex couples beginning in 2004 - is one of six states that allow homosexuals to marry, in addition to the District of Columbia.

"Look around here. The turn-out is fabulous," Morales said. "We are reclaiming religious faith from the forces of marginalism and ignorance. I am happy to add my voice to this major interfaith battle," he said, telling the crowd that marriage in his home state is thriving, and has one of the lowest divorce rates. "We will prevail. We need to continue this fight together."

According to Morales, Unitarian Universalists have a long and rich history of social justice work. In 2008, the UUA launched the "Standing on the Side of Love" campaign to elevate compassionate religious voices to influence public attitudes and public policy. 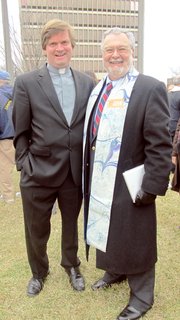 "For Unitarian Universalists, support for marriage equality is an expression of our core religious values," Morales said. "We affirm the inherent worth and dignity of all people. We believe our laws should treat all people equally and with compassion. We are determined to stand on the side of love, and to stand for equal treatment of our LGBT brothers and sisters."

Elizabeth Fogarty of Reston wore a PFLAG (Parents, Families and Friends of Lesbians and Gays) button, and said she was there to support marriage equality for women like her daughter, who is a lesbian.

"My oldest daughter is a lesbian, and my youngest daughter is straight. They both support each other, and I am very proud of both of them," she said.

The Rev. Scott Sammler-Michael, senior minister of the Accotink Unitarian Universalist Church in Burke, who led the crowd in singing several spiritual songs, said he has always been an advocate for marriage equality. "This is the civil rights issue of our time. Denying people who love each other the right to get married has never made any sense to me," he said.

THE CLERGY offered a blessing to all LGBT couples present. "It is my great hope that we are moving toward a kinder and more just society in which all citizens enjoy equality under the law," said Mary Katherine Morn, parish minister at UUCF.

"As a spiritual leader, I am especially concerned about protecting and supporting all those who seek to create loving families, the foundation of our great country," Morn said.

The Rev. Don Prange, minister of St. James United Church of Christ in Lovettsville, said the event was filled with "some interesting ironies."

"We are on land once granted to the only Lord to actually occupy land granted by an English king, just three years after a Virginian named Thomas Jefferson wrote about ‘certain unalienable rights’…even though it was self-evident that given slavery and a very limited franchise for voting, that declarations words about liberty hardly embraced equality…"

He said it was time for the state of Virginia to recognize that same-sex marriage is the only way to bring "the Declaration of Independence up to date in recognizing a very natural marriage of liberty and equality that would full equality for all… and not just for some."

Amanda Lee of Vienna, who handed out candles to the crowd, said she knew several same-sex couples who had been in long-term relationships, and they deserved the right to marry.

"It’s hard to believe that it’s not a federally protected right. This is bigotry, and it needs to end now," Lee said.

David McCracken of Herndon stood quietly off to the side of the group, holding a handmade sign and listening to the speakers.

"I’m here partly to atone for my past sin of prejudice, "McCracken said. "I guess what changed my thinking is just life, seeing homosexual couples and realizing they are just like us."

Cathy Downs of Springfield said she has always had friends who were same-sex couples, and it was painful to watch them struggle with simple rights, such as hospital visitation. "I hope they walk in and get that marriage license."