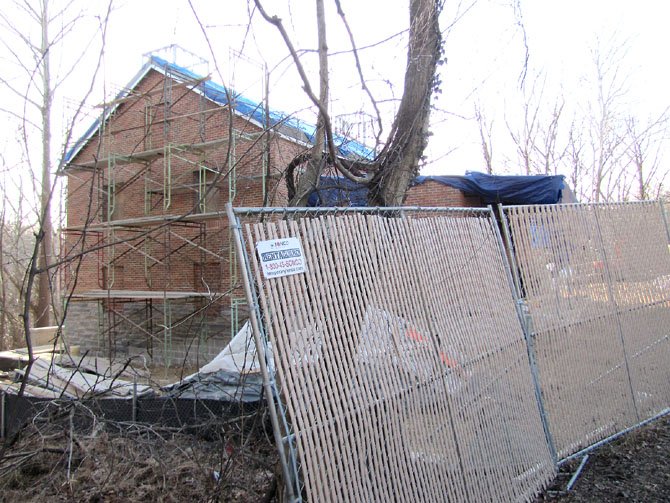 Construction on buildings that will filter the odor from vents in a major sewer line is blocking parking to this popular Potomac River access point at Angler’s Inn. Photo by Ken Moore.

Construction along the C&O Canal to help eliminate stench is currently causing a stink.

The parking lot at Anglers Inn on MacArthur Boulevard, used by kayakers enjoying the Potomac River as well as runners, hikers and bikers traversing the Billy Goat Trail and towpath, is now filled with construction equipment and no parking signs. The public can’t access the lower lot at this time. 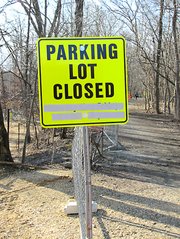 “We visitors are in a little bit of a jam right now,” said Matthew Logan, president of Canal Trust.

DC Water, Montgomery, Loudoun and Fairfax counties are building six ventilation buildings along the main sections of the Potomac Interceptor Sewer, a 50-mile long gravity sewer that transports wastewater from Dulles International Airport in Chantilly, Va. to the treatment plant in Washington D.C. The building at Anglers Inn will also include rest rooms.

The project will reduce the notorious odors generated by the sewer that have been released at vents located along the canal. The vents are particularly noxious in the warmer months. DC Water began design and planning the problem in 1999.

The odor control system will reduce smelly gasses as well as gasses in the interceptor that corrode the sewer pipes.

“I’m always dubious of high tech solutions, but I’ve been assured this is a good approach and to trust that the engineers know what they are doing,” said Logan.

Ventilation sites are being built at Angler’s Inn, along the Clara Barton Parkway in Cabin John and near the Little Falls Pumping Station in Bethesda. Other sites are in Washington, D.C. and Virginia.

Feb. 8, a community forum was held at Rockwood Manor so park and river enthusiasts could voice their concerns and brainstorm solutions to prevent this upcoming paddling season from becoming a wash.

Ideas included better parking signs to direct casual users to Great Falls rather than parking along MacArthur when they see other cars stopped.

Paddlers attending the meeting also suggested a drop-off zone, where they could unload kayaks and canoes, before finding a place to park down the boulevard.

The project was scheduled for completion in Maryland originally in November 2011, then March 2012. The DC Water web site currently lists the completion date as fall 2012, although that might be a little optimistic as well.

Repair is currently being done, which has further affected the parking area across from Angler’s Inn, as well as use of the canal and park.

A $3.6 million project will restore the towpath and improve safety to visitors and minimize the potential for additional breaches to occur, according to National Park Service Superintendent Kevin Brandt.

The park service’s non-profit partner, The C&O Canal Trust, donated $100,000 to the project.

“If it hadn’t been for our donors rallying their support immediately after the breach, this project would not have been competitive and eligible for public funding,” said Logan.

The non-profit was founded in 2007 to partner with the park service to “protect, restore and promote the C&O Canal.”(See www.canaltrust.org)

Upon completion the canal will hold water once again. “This area is a gateway to the popular Widewater area of the canal as well as a necessary link to return water to the seven mile stretch of the canal downstream,” said Brandt.

A Massachusetts company repairing the breech still expects to complete the project by the original target date of Fall 2012.