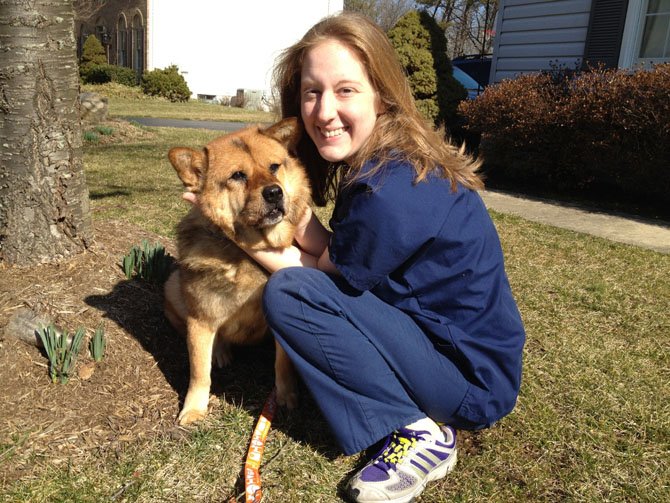 All pet-parents think their pets are pretty special. Some pets are just cuddly and lovable, some blindly-devoted, some clever. Some dogs risk their lives as part of their jobs, while others give humans with physical disabilities independence. Other pets inspire a will to live in the humans whose lives they are intertwined with. Some save lives with blood donations.

Here are a few stories about ordinary pets who do extraordinary things. 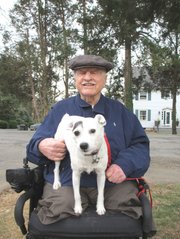 George Hembree and his companion Katy.

If you live or work in Vienna, you may have seen George Hembree scooting around town in his wheelchair, his much-loved companion, Katy, always jogging alongside him. Hembree, 90 years old, is out and about just about every day, weather-permitting. He and Katy put in as much as five miles in one outing. Hembree’s wife Rosa died in August of 2011 after 44 years of marriage. Katy is his frisky and loyal 9 1/2 year-old Jack Russell terrier who has been with Hembree since she was four months old.

"She’s all I’ve got now," said Hembree of Katy. As an afterthought, he says he also has a cat, but Katy is his companion. For now, Hembree is living with his daughter on Park Street.

Katy, like many other small dogs, does not know she is small. She "protects" Hembree by barking at strange humans and other dogs. Although Hembree’s legs were amputated, Katy still jumps on his lap and snuggles against him.

What makes Katy special? "She’s my interest," said Hembree. "I take her walking with me, and play with her. She’s my companion.

"I hope she lives longer than I do. If I die before she does, my daughter would take her." 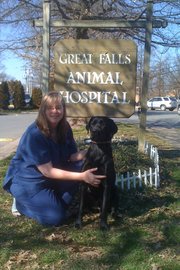 Badger Forgrave, Lisa Forgrave’s 3-year-old Labrador, has been saving lives since she was eligible and that was at age one. She saves lives – up to four at one time – by giving blood to the Blue Ridge Blood Bank [BRBB], formerly known as Eastern Veterinary Blood Bank. A BRBB vet draws the blood for analysis when the dog (the dog’s companion, that is) applies as a donor. The first Thursday of every "odd" month, the vet comes to the Great Falls Animal Hospital for the blood drive. If the dog’s blood qualifies for donation, the dog becomes a donor reaping benefits.

"The dog receives a free initial blood chemistry panel, as well as annual free screenings, including screening for tick-born diseases and heartworm," said Forgrave of Great Falls. "Once a dog becomes a BRBB donor, if the donor dog ever needs blood from Blue Ridge, that dog can have free transfusions as long as they are needed." Forgrave has personal experience with both sides. Not only is Badger a donor, but Badger’s predecessor was, as well. Her dog previous to that was a blood recipient.

TO BE ELIGIBLE as a canine blood donor, a dog must be, at least, one year old, and must weigh 50 pounds or more. And if you’re wondering, another qualification is that the donor dog must enjoy the blood-giving experience. Neither the pet-parent, veterinarian nor blood bank will allow a scared or uncomfortable dog to participate. It’s a win-win situation for the donor dogs and the recipients whose lives depend on blood donations.

"The [donor] dog gets lots of treats before the blood is drawn and after," said Forgrave. "Badger loves treats."

To learn more about the benefits and procedures, go to EVBB.com.

Kierianne Knollman lives in a home full of family pets. Knollman has a twin sister, but she says, it is her rescued dog Macy who knows her better than anyone else does. Macy is her confidante, her inspiration. Four years ago, Knollman took a leave of absence from the college in South Carolina she was attending. She was homesick, depressed, didn’t know what she wanted to do with her life. When she returned home, Macy was there to help Knollman sort out her young life.

MACY is a senior dog now, a bit curmudgeonly, Knollman said, but still a complement to Knollman’s personality.

"She was there to comfort me, let me hug her, talk to her," said Knollman. "She was my reason for getting up in the morning, getting my day started. Sometimes, with depression, the hardest thing to do is to get the day started.

"She was like a friend, therapy-wise, to me. She was the inspiration for my goal in life." All the Knollman family pets were rescues, and Macy gave back so much to Kierianne. "She made me realize, since I came home from school, that I wanted to work with animals and animal rescue."

Now, Knollman, a vet assistant at Great Falls Animal Hospital, is at Northern Virginia Community College training to be a licensed veterinary technician, a skill in high-demand throughout the country. While working at the animal hospital and going to college, Knollman volunteers at the Animal Welfare League of Alexandria. "Macy was with me when I was having a hard time after college. She inspired me."