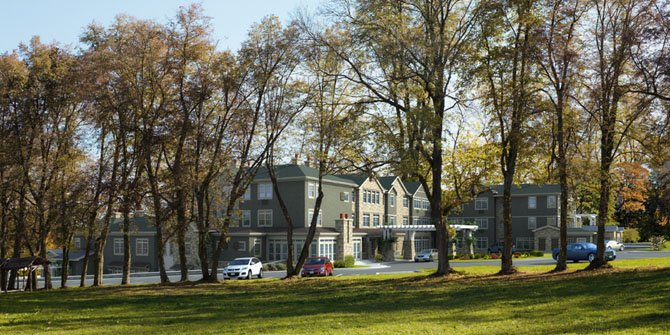 A rendering of the proposed Brightview assisted living facility, as was presented to the Great Falls Citizens Association Land Use and Zone committee Feb 15. Photo Contributed

Great Falls — The Great Falls Citizens Association’s Land Use and Zoning committee began hearing information on architectural specifications for the proposed Brightview assisted living facility. The facility, which was approved as a special exception by the Fairfax County Board of Supervisors last year, will be located off Colvin Run Mill where Thelma’s was previously located.

Shelter, LLC, the company building Brightview, signed a memorandum of understanding with the GFCA last May which allows the GFCA to have input on the building’s design.

Representatives for Shelter presented their initial designs at a Feb. 15 public hearing at the Great Falls Library. Buzz Drury, architect for the project, said they are aiming for a low-impact design.

"When we started the project, we knew we were going into a delicate community fabric, and our goal is to keep the building as ‘silent’ as possible," he said.

The 53,000 square foot, three-story building will be no higher than 40 feet. It will be designed with what Drury called "the moss green color range." He said they started their designs with the type of stone used at the Great Falls Fire Station, but found it too rugged.

They chose Eldorado stones, which are more uniform in height and resemble bricks.

Drury said it could be possible in future weeks to have a mock-up of the materials and colors that will be used displayed at the site. He also said the south and west sides of the property will have the most impact on the community, so they will be "softened" the most.

Shelter presented their design to the county’s Architectural Review Board on Feb. 9.

"We will have new renderings as soon as the colors are finalized," said Andrew Teeters, senior director for development for Shelter. "Going forward, we’ll be taking public comments into consideration and may modify the design, but we won’t be going back to the ARB."

Wayne Foley, a member of the committee, said he wanted to make sure the community has input on the design.

"We’d like to see it vetted in the community, seeing the colors are one thing, but we also want them to see the design," he said. "We’re going to try as hard as we can to get as much input as possible, so the people who say they don’t like the design have seen it and know what they don’t like."

The Land Use and Zoning committee will prepare a report on the facility, which will be available on the GFCA’s website, www.gfca.org.