Herndon — Youthful dreams and ambitions while searching for love makes for "a perfect little winter romantic musical; really an affectionate love letter to an audience," said award-winning veteran director Todd Huse of "Rooms, A Rock Romance." The next Elden Street Players offering is sweet and edgy as it tells "the tale of a relationship of two polar opposites" through music and lyrics. 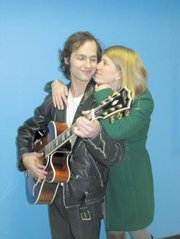 With a score of rock songs and show tunes backed by a six-piece band, the musical "is not the same old rock rhythms usually heard, but a variety of musical styles," said musical director Blakeman Brophy. He will direct the band through the show's 90 minutes and a song list of nearly two dozen songs including songs that range from the tender to the punk. There is even one for a Bat Mitzvah entitled "Scottish-Jewish Princess."

The story follows a young girl singer/songwriter, who meets an equally young but less driven, isolated boy rocker. She wants to get places fast while he has his share of personal issues and addictions that can make artistic success or loving someone somewhat difficult. This leads to a spirited, "push-pull" of a bond, both creatively and romantically. The show's arc follows the couple through several years of travels together from Glasgow, Scotland to London to the New York City punk rock scene.

Huse described the show as "a great little musical that too few have yet seen or heard. It is a rare find... unusual in that it is mostly sung, with less spoken dialogue than is often the norm for a musical." The music and lyrics for "Rooms, A Rock Romance" were written by Paul Scott Goodman who collaborated with his wife Miriam Goodman in co-writing the book.

The two-actor show features newcomer Kate Roehr as the young woman who feels askew and dreams of "bringing the future faster." She doesn't quite yet "understand what life means beyond that things are just not coming fast enough" as she chases after life full speed according to Roehr. But she does knows that songs shape her life.

Michael J. Perez is the male lead. While his character is an edgy rocker he described the show as "a very down-to-earth musical" about two people journeying toward love and success through any number of trials as they move well beyond just sitting in a room feeling alone.