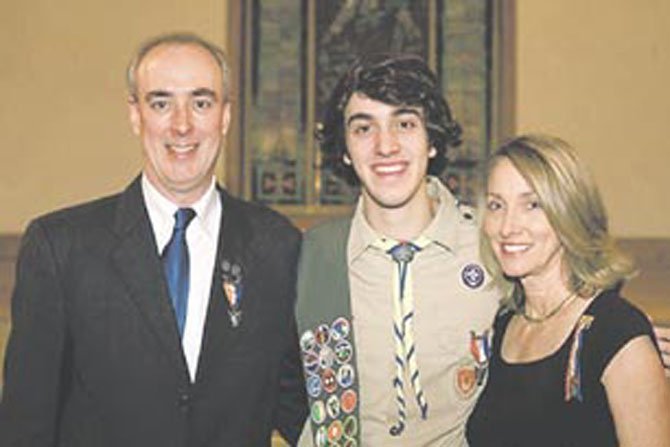 CONNER, son of David and Suzanne Pierce of Great Falls, is a senior at GW Community High School. Conner joined Troop 673 in 2005 after earning the rank of Arrow of Light as a Cub Scout. Since joining the troop, he has served as Patrol Leader twice and Troop Chaplain. As well as attending summer camp four years with the troop, Conner has participated in High Adventure trips to Sea Base and Philmont. Conner utilized his scouting skills to play a leadership role with Wilderness Ventures in a four-week high adventure trip in Yosemite and the Lost Coast of California. He has also completed the C & O Canal Bike Hike, riding all 185 miles of the canal in a 5-day trip.

Conner's Eagle project was to repair a badly eroded, steep section of trail in Great Falls National Park. Working with park staff, Conner developed a detailed plan to rebuild the trail by removing old trail features and replacing them with several new check dams to create a series of steps up a 50-foot section of trail. With the help of the troop and others, Conner designed and supervised installation of the new trail features, narrowed the trail to the proper width, and ensured that the trail is easily and safely navigable by hikers. The trail improvements will also prevent erosion and ensure that the trail remains safe for hikers for many years to come.

This past summer Conner participated in a four-week Spanish language immersion and community service trip in rural Costa Rica where he built a corral for the local community. At GW Community School, Conner has participated in an internship at a sound recording studio and has been the graphic designer for the yearbook. Conner plans to attend college this coming fall.

PETER, son of Phil and Fran Arcoria of Great Falls, is a senior at Langley High School. Peter began his scout career as a Tiger Cub with Pack 673 in Great Falls and continued his scouting activities in Houston, Texas. Upon his family’s return to Great Falls in January 2007, Peter joined Troop 673 with many of his Cub Scout friends. Peter has had the opportunity to attend scout camps in Texas, Virginia, Pennsylvania, and Delaware with the two troops he has been affiliated with. Peter’s honors include the Ad Altare Dei Award religious medal, and Order of the Arrow, which is considered Scouting’s National Honor Society. Peter has served Troop 673 as Patrol Leader, Quartermaster, Den Chief, and as a representative to the 2010 National Camporee. He has also enjoyed two Sea Base excursions; the Bahamas Adventure and Coral Reef Sailing

For his Eagle Project, Peter reconfigured a segment of trail in Hollow’s Trail, within River Bend Park. As Peter receives his Eagle Rank Award, he joins his older brothers, Philip and Paul, rounding out the family’s own, Triple Crown of Eagle Scouts. Upon graduation from high school in June 2012, Peter will begin to pursue his lifelong goal of delving into the business world as a student in college.