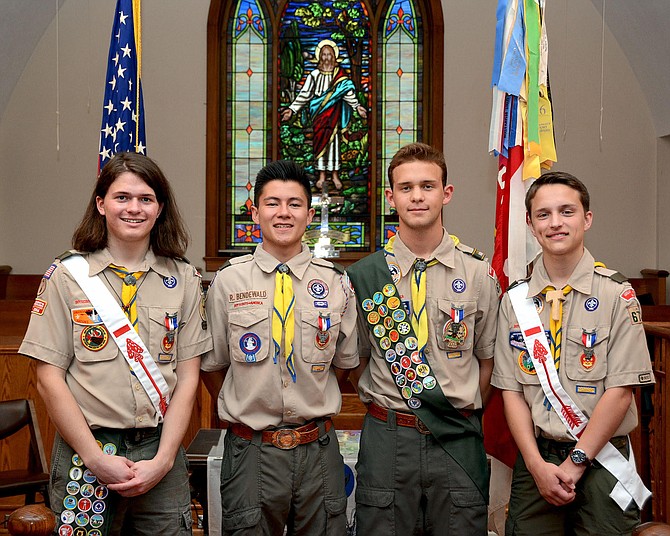 For his Eagle Project, Ryley created shelving in the band room storage units at Langley High School, allowing band instruments to be stored safely and efficiently for decades to come.

Ryley graduated from Langley High School in 2017 and now attends the University of Southern California, where he is an Army ROTC four-year scholarship cadet.

For his Eagle Project, Greg planned and built three new elements in the teaching garden at Clearview Elementary School in Herndon. The garden is used by the kindergarten classes to grow the natural ingredients for making pizza. With the help of troop Scouts, the garden was expanded to include three new raised planter beds, an arbor and a structure to hold bird feeders.

Greg is a rising senior at Langley High School. He is a member of the LHS Marching Band and Wind Ensemble, where he plays the euphonium.

For his Eagle service project, Matthew designed and constructed eight brush boxes for Turner Farm Events, a local charity that runs horse shows and helps maintain Turner Farm Park for equestrian activities. Equipment for the jumps was lacking and too expensive to purchase. Horses have trouble seeing the thin piles across the jumps when directly in front of them. Brush boxes are positioned under the jump as a ground line to help them see where the jump is located. Matthew led a team of project volunteers to develop these quality boxes, which are both functional and decorative and are now part of every show at Turner Farm.

Matthew is a rising senior at Langley High School, where he plays saxophone in the Wind Ensemble and Marching Band, and has been a member of the track team. He also plays travel soccer for the Great Falls Soccer Club and enjoys fly fishing with his dad. After high school, Matthew plans to pursue a career in engineering.

For his Eagle project, Benji constructed a rain garden at Great Falls United Methodist Church to reduce stormwater pollution in August 2017. When rain water flows downhill on pavement, like the church’s parking lot, it picks up harmful chemicals deposited by people and cars. Putting a garden in the path of the runoff slows water and captures it temporarily while the plants in the garden help to clean the water before it drains in its normal path. Benji planned the layout of the rain garden and incorporated best practices in the design of “green infrastructure.”

Benji is a rising senior at Northfield Mount Hermon (NMH), a boarding school in Massachusetts, where he performs as a percussionist in a wide range of musical ensembles and is a member of the NMH Outdoor Team (paddling, mountain biking, and trail running). After high school, Benji intends to pursue a career in music.