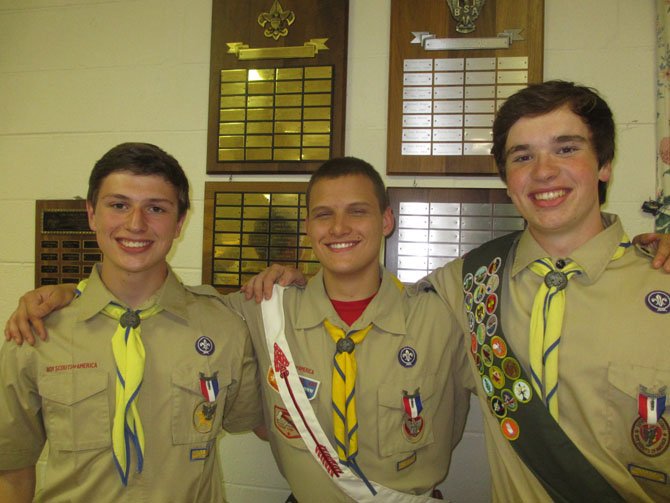 From left: Daniel Cunningham, Will Tennille, and John Waugh. Photo by Nancy Waugh

Daniel Cunningham, Will Tennille, and John Waugh, of Eagle Scouts from Troop 673 in Great Falls — sponsored by the Great Falls United Methodist Men — are the most recent among more than 100 Eagle Scouts developed by the Troop for over 50 years of activity.

DANIEL CUNNINGHAM, son of Kim Cunningham and Maria Ramos of Great Falls, joined Troop 673 in 2006 after earning the Arrow of Light as a Cub Scout. Since joining the troop, Daniel has served as a Den Chief, Assistant Senior Patrol Leader, Senior Patrol Leader, and Troop Guide. While serving in these positions, he was accepted into the Order of the Arrow; Scouting’s National Honor Society, and participated in various trips such as the hike across Maryland – a five day hike across the Maryland section of the Appalachian Trail – and the Philmont high adventure.

For his Eagle Project, Daniel restored part of one of the few remaining prairies in Northern Virginia which had been overrun with weeds, fallen trees and overgrown bushes. In addition to the restoration work, he also led the construction of habitats - to support small animals - and rehabilitation of a trail through the area at Riverbend Park. With over 30 volunteers, the project was finished efficiently and was critical in preserving this endangered ecosystem.

A recent graduate of Langley High School, Daniel applied his over a decade of experience as a clarinet player by being a member in the Wind Symphony band. He was also a member of the Track and Field team. After high school, Daniel plans to major in mechanical engineering and join the Air Force as a pilot.

WILLIAM GRANT TENNILLE V, son of Debora Green and Stephen Gray of Great Falls, and Mr. and Mrs. W. Grant Tennille IV of Little Rock, Ark., joined Troop 673 in 2007, after earning the rank of Arrow of Light as a Cub Scout. Since joining the troop, Will has served as Assistant Patrol Leader, Quartermaster, and Troop Instructor. An avid backpacker and hiker, he has hiked the complete Maryland section of the Appalachian Trail, in addition to participating in high adventure expeditions to Philmont and Sea Base. His enthusiasm in scouting was recognized by election to the level of Order of the Arrow, Scouting's National Honor Society, in 2009.

For his Eagle Project, Will and a dedicated team redeveloped and expanded a trail which connects the corner of Nike Park to a trail network into the commercial center of Great Falls. Will supervised and assisted a group of approximately 25 volunteers, working on the hottest day in recorded history to clear and level a 100 meter segment of trail and move over two tons of gravel. This small link has had a giant impact for the community

Will is a recent graduate of Woodberry Forest School, in Madison County, Va. where he served as a head ropes course instructor and was co-captain of the varsity swim team. In the fall, Will plans to attend Denison University in Ohio.

JOHN WAUGH, son of William and Nancy Waugh of Great Falls, began scouting in 2003 as a Cub Scout in Pack 673 and crossed over to Boy Scout Troop 673 in 2007. In becoming an Eagle Scout, John has followed the footsteps of his older brothers Matthew, Mark and James, who were also members of Troop 673. Since joining the troop, John has participated in numerous troop outings including backpacking trips, ski trips, summer camps, and troop service projects. John also participated in two High Adventure trips: Sea Base in 2010 and Philmont in 2011. John has served in various leadership positions in the troop including Instructor, Assistant Patrol Leader, and Librarian, was Crew Chief at Sea Base, and attended Impeesa, the BSA National Youth Leadership Training. As Instructor, John helped set up and lead orienteering sessions for the troop.

For his Eagle Project, John directed a group of scouts, friends, and family in repairing a severely eroded hill trail at Riverbend Park in Great Falls, and installing a series of water bars to prevent further erosion. Scouts and friends dug trenches with pick axes and shovels, hauled large telephone pole water bars up the hill and installed them, back-filled the trenches, and leveled the pathway to remove gullies made by rainfall runoff. John’s project provided park visitors with a safer, more stable trail and will protect the steep trail from future erosion.

John is a recent graduate of Langley High School where he was a member of the Langley Crew team for four years and was in the Men’s top Varsity boat for the past two years. In the fall John plans to attend college and is interested in studying physics or engineering.