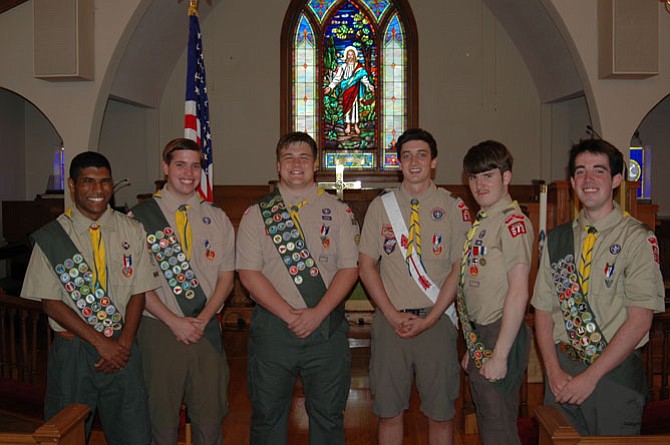 Boy Scout Troop 673, sponsored by the Great Falls United Methodist Men, held a much larger Eagle ceremony than usual, when it celebrated the promotion of six graduating seniors as new Eagle Scouts on June 18. These six – Robert Maloney, Kiran Hampton, Mark “MJ” Johnson, Andrew Howard, Jonathan Canfield, and Jack Langford – just graduated from local high schools – four from Langley, one from South Lakes, and one from Thomas Jefferson – and are all college-bound.

ROBERT MALONEY, son of Valerie Pease Maloney and Gary Maloney, joined Troop 673 in 2009 after earning the Arrow of Light as a Cub Scout. Since joining the troop, Robert has served in the leadership positions of Historian and Patrol Leader. During his time as a Boy Scout, he earned the World Conservation and Religious Awards, the Gold and Bronze Palms, and 48 merit badges; and in 2013, he participated in the Sea Base High Adventure trip. Robert was selected for the 2015 Virginia Boys’ State program by the American Legion. He was named Eagle Scout of the Year in the Fairfax Resolves Sons of the American Revolution (SAR) Chapter for 2015, and placed third in the state by the Virginia SAR contest that same year.

For his Eagle Project, Robert installed warning signs along the Potomac River in Riverbend Park in Great Falls. Robert’s project was sponsored by the Great Falls Rotary Club, with additional support from local businesses. This project was part of the park’s effort to help prevent deaths by drowning from wading into the river.

Robert graduated from Langley High School this June. He will attend Christopher Newport University as part of the Presidential Leadership Program, and plans to major in Business.

For his Eagle Project, Kiran constructed eight raised garden boxes for use as a teaching garden at Franklin Sherman Elementary School. Working with the school administration, Kiran created a detailed plan for the garden, and with the help of his fellow Scouts, Kiran was able to construct the boxes, till the soil, and ultimately create a beautiful and lasting garden space.

Kiran graduated from South Lakes High School this June. While at South Lakes, Kiran was a member of the Debate team, as well as the coach of the debate team at neighboring Langston Hughes Middle School. Kiran is set to attend Harvard University starting in the fall.

MARK “MJ” JOHNSON, son of Lottie and Mark Johnson, joined Troop 673 in 2010 after earning the Arrow of Light as a Cub Scout. Since joining the troop, MJ has served as Patrol Leader, Assistant Senior Patrol Leader, Scribe, Librarian, and Troop Historian. MJ served in the Patrol Leaders Council for five of the last six years, attended four summer camps, and one Trail to Eagle camp. He earned 27 merit badges and the World Conservation Award.

For his Eagle service project, MJ constructed a wooden Flag Box for the placement of flags not in proper shape to be flown. He worked with the Great Falls Fire Department for space to be used in keeping the box, and with his own troop in establishing a flag retiring ceremony, to be completed at each summer’s closing campfire.

MJ just graduated from Langley High School. While at Langley, he was a member of the football and wrestling teams. MJ plans to attend James Madison University and pursue a career in Computer Science.

For his Eagle project, Andrew designed and built a memorial garden at St. Francis Episcopal Church in Great Falls. This project involved digging an extensive drainage system to divert water away from the garden, and involved a stone lining surrounding a boxwood and pachysandra bed. The garden provides for the ash internment of parishioners and a place for contemplative prayer.

Andrew graduated this June from the Thomas Jefferson High School for Science and Technology (TJHSST). While attending TJHSST, Andrew served as student body vice president, crisis director of Model United Nations, a member of the Chemical Analysis and Nanochemistry Research laboratory, and a business intern for InnaMed. This fall, Andrew will begin attending the Wharton School at the University of Pennsylvania to study finance, economics, and management.

JONATHAN CANFIELD, son of Naomi and Eugene Canfield, joined Troop 673 in 2009 after earning the Arrow of Light as a Cub Scout. Since joining the troop, Jonathan has served as Den Chief, Troop Guide, and Instructor. Jonathan has attended four summer camps and two High Adventure trips, Sea Base in 2012 and Philmont in 2013. Jonathan will return to Philmont this summer with a troop crew, this time as one of the adult leaders. Jonathan was accepted into the Order of the Arrow, Scouting’s National Honor Society, in 2009, and received the Cory Corrales Spirit Award at summer camp in 2011. He earned 33 merit badges, the 50 Miler award (twice), and the Snorkeling BSA and World Conservation awards.

For his Eagle Scout service project, Jonathan planned and constructed a 10x12 storage shed for the Cooper Middle School Theatre Department. He first raised money from the Tart Lumber Company, Cooper Middle School, and the theatre department, and then built the shed over five weekends with help from his fellow Scouts. The shed provides the theatre department with a place to store props from one year to the next instead of having to throw props away and buy new materials each year.

Jonathan just graduated from Langley High School. While at Langley, he was a member of the Model United Nations team and president of Langley’s National Honor Society; he also played lacrosse for three years. Jonathan will be attending Wesleyan University in Connecticut, where he plans to double major in East Asian Studies and Economics, with a minor in Japanese (and potentially Chinese).

JOHN “JACK” LANGFORD, son of Russell and Susan Langford, joined Troop 673 in 2011 as an eighth grader. Since joining the troop, Jack has served as Patrol Leader, Troop Guide, Assistant Senior Patrol Leader, and Senior Patrol Leader. Jack has attended summer camp four times and three of the High Adventures: Sea Base, Philmont, and the Summit. He earned 25 merit badges, and the 50 Miler and Snorkeling BSA awards.

For his Eagle project, Jack built two boardwalks and 150 yards of trail in Scott’s Run Nature Preserve, in McLean, in order to replace a failing bridge and create a more sustainable trail.

Jack graduated this June from Langley High School. He plans to attend Virginia Tech in the fall with the goal of pursuing a career in electrical engineering.