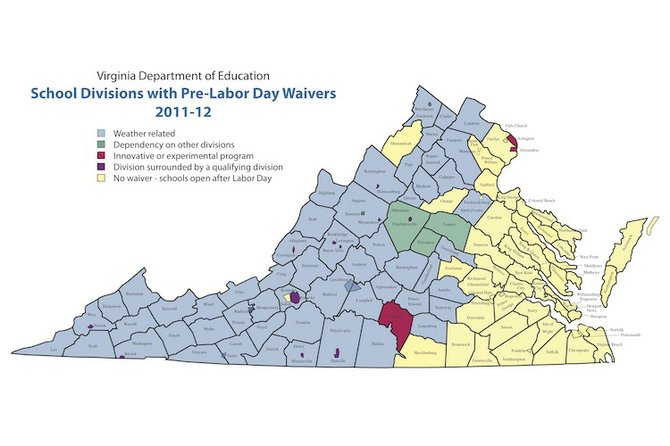 “Local communities can best balance their teaching and calendar needs with the important concerns of local tourism and business. They know their situations far better than Richmond.”

Ever since Republicans gained a narrow one-vote majority in the state Senate, many in Northern Virginia have been fearing a loss of influence in Richmond. But Republican Gov. Bob McDonnell threw the region an unexpected lifeline last week on an issue that was at the top of the legislative agenda for the region — ending the prohibition against beginning schools before Labor Day. The mandate is known as the “King’s Dominion Law” because the amusement park successfully lobbied for the prohibition in the 1980s.

“Local communities can best balance their teaching and calendar needs with the important concerns of local tourism and business,” said McDonnell during his annual state of the commonwealth address. “They know their situations far better than Richmond.”

For most of Virginia, the issue doesn’t make much of a difference because of the amount of snow that falls west of the Fall Line. School divisions in those parts of Virginia can get a weather waiver, allowing them to begin school before Labor Day because they are unable to hold classes during the coldest parts of winter. Yet school divisions in the eastern parts of the state can’t get a weather waiver because they don’t get enough snow. And when Alexandria City Public Schools tried to get an “innovative program” waiver, they ended up abandoning the application when it became clear that the State School Board was about to reject it.

“It’s just downright silly to say that schools can start early if they get a lot of snow but can’t if they want to help teachers,” said Alexandria Superintendent Morton Sherman. “The state is flat out wrong.”

SEVENTY SEVEN of Virginia’s 132 school divisions already have some form of waiver, which means that the exception has become the rule. That also means that the hospitality industry that fought for the mandate is fighting for an increasingly smaller share of the profits. The Virginia Hospitality and Travel Association, which represents King’s Dominion and other amusement parks, will be leading the charge for maintaining the status quo. The association estimates that shortening the tourism season would forgo spending by about $274 million and decrease wages and benefits by about $104 million.

“We’ve never seen any kind of difference in academic achievement in terms of starting before Labor Day,” said Katie Hellbbush, director of government affairs for the association. “But studies have shown a distinct change in tourism.”

But school officials in Northern Virginia say momentum is on their side. Even before McDonnell highlighted the issue in his state of the commonwealth speech, the Virginia School Boards Association identified it as a top priority. The mandate against beginning classes before Labor Day has become a shared frustration across the region. This year, the effort to abandon King’s Dominion Law is supported by the Virginia Education Association, the Virginia Association of School Superintendents as well as a handful of Northern Virginia jurisdictions.

“The big hurdle is going to be having the business community not as concerned as it’s been in the past,” said Michael Molloy, director of government relations for Fairfax County Public Schools. “It’s really about persuading legislators that this change is needed to help student achievement.”

“Now that we have the Standards of Learning, it’s really important to give the schools time to prepare the students to take the test,” said Albo. “You can’t have it both ways.”

Two years ago, Del. Adam Ebbin (D-49) introduced a bill that would have allowed school with high rates of poverty be exempted from the Labor Day restrictions. That failed, but Ebbin is undeterred. Alexandria’s experience being essentially denied a waiver has galvanized local school officials to put pressure on Alexandria City Council members, who added the item to their legislative package this year. Now Ebbin says he’s going to take another crack at it. This week, he introduced a bill that would give school divisions the ability to start school whenever they want, regardless of poverty statistics.