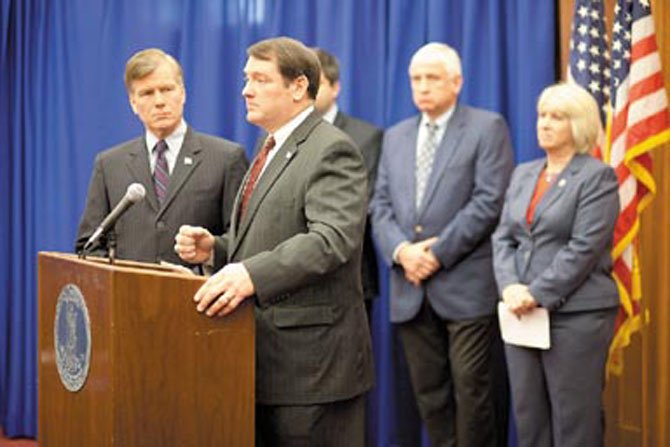 Fairfax County — Repeal of the "Kings Dominion law," which requires Fairfax County schools to obtain a state waiver to open schools before Labor Day, is high on the list of legislative priorities announced Monday, Jan. 16, by Governor Robert McDonnell.

"(This) report contains common sense recommendations which will provide fiscal relief to localities and the Commonwealth, and will enable both to more efficiently serve Virginia's residents," Herrity said.

Allowing Northern Virginia schools to open before Labor Day without a waiver – a move championed for years by local school boards and educators - was just one of 60 mandates the task force recommended eliminating or modifying.

A THIRD of the recommendations dealt with education, including removing the requirement that schools must offer online Standards of Learning (SOL) testing in middle schools.

The task force also set a goal for the Department of Education to reduce "unnecessary" state and federal reporting requirements for Schools by 15 percent, such as abolishing the mandate for annual reports on remediation programs.

"The removal of these mandates on localities will save time, tax-payer dollars and ultimately result in better, more accountable services for Virginians," said Joan Wodiska, president of the Virginia School Board Association and a member of the Falls Church City School Board, during Monday’s news conference.

Other legislation proposed by the task force includes:

*Removing the mandate for state inspections of erosion and sediment control programs where localities have inspections.

*Eliminating the mandate that requires VDOT approval of the location of locally-placed red light cameras.

*Eliminating the mandate for localities to give first priority for vending contracts to the Department of Blind and Visually Impaired.

In September 2011, the Governor announced the creation of the five-member task force, a result of legislation introduced by Sen. Steve Newman (R-Bedford County) to review state mandates imposed on localities, and to recommend temporary suspension or permanent repeal of such mandates.

"Burdensome mandates on localities exacerbate the challenge of balancing a budget in these tight fiscal times," McDonnell said at the news conference. "On the state level, we don’t like it when the federal government hamstrings us with mandates and red tape."

Herrity said localities need relief from state mandates, and are not in a position to accept new ones after several tough budget years.

"These recommendations have taken on greater importance as the cumulative budget gaps in local governments likely exceed the budget gap experienced by the Commonwealth," Herrity said. "The vast majority of localities are projecting revenue growth less than the Commonwealth's projected growth of 3.1 percent."

IN ADDITION to the legislative proposals, Governor McDonnell is recommending $10 million in his Fiscal Year 2013 budget and $15 million in Fiscal Year 2014 to help offset previous reductions in aid to localities.

Herrity said Monday’s announcement was just the first step of the task force that has been meeting since November 2011.

"It’s important to point out that this is only an interim report to meet the deadline Gov. McDonnell gave us for the 2012 General Assembly session, and these recommendations are only the beginning of our work," he said.

Several bills have been introduced in the 2012 General Assembly session at the request of the Governor and other legislators reflecting the vast majority of the Task Force recommendations, according to a statement released by the Governor’s office on Monday.

The full report from the Task Force for Local Mandate Review is available at: www.governor.virginia.gov/utility/docs/Interim%20Report%201%2016%2012.pdf