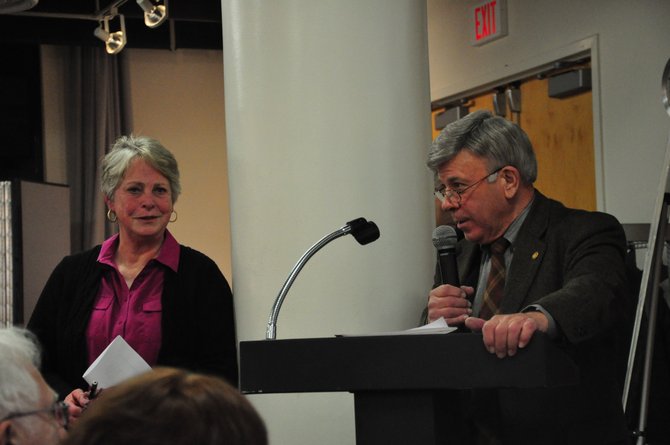 Historians Karen Washburn and Ted McCord speak at the Reston Community Center Lake Anne about the early history of the land that became Reston Thursday, Jan. 19. Photo by Alex McVeigh.

Reston — Long before Reston became the community it is today, it was almost an afterthought by those who owned the land. The Reston Historic Trust hosted a program about the early history of Reston Thursday, Jan. 19, featuring historians Karen Washburn and Ted McCord at the Reston Community Center Lake Anne.

Washburn told the story of the Northern Neck Proprietary Grant, which was a land grant that included Reston. The land was largely unsettled until Thomas, Fifth Lord Fairfax of Cameron inherited five-sixths of the property through his wife’s father, and they began to explore the area.

"Land ownership then was not as it is today. If you had a proprietorship, you owned the land, and you would give others the right to use it. The others could use the land as they saw fit, but still had to pay rent," Washburn said. "The owners who bought the land didn’t want to move up from the Tidewater region, so Reston remained vacant."

Brent Reolon of Reston, who considers himself a history buff, said he was first attracted to the program when it promised a glimpse into the pre-1964 days of Reston.

"One of the things I like about this community is that its history can be traced back to literally the beginning, to the day Robert Simon founded Reston," he said. "But for me, almost everything before that was a blank, so it was interesting to see whose hands this land passed through, and it made me chuckle to think how nobody wanted it for so long."

The land was mostly primordial forest then, and with no easy access to rivers, it wasn’t the most desirable land.

"It was neat to hear about how these places started out as the same bundle, and then became Herndon, Reston, Great Falls."

"There just wasn’t much to look at other than woods," McCord said. "Even in the Tidewater region, most of the settlements were along the major rivers."

Washburn talked about how Robert "King" Carter, who managed the land for Lord Fairfax, owned the land that later became Herndon, but didn’t seem to be interested in settling Reston.

"My conjecture is that Robert was looking for copper on his land near Herndon, and he thought there might be some in Reston, but he was wrong," she said.

After the Tidewater soil was used up by excessive tobacco farming, people eventually moved into this area of the proprietary. After the Revolutionary War, Benjamin Thornton purchased 8,663 acres.

"His rationale was that the land was right between Alexandria’s ports, and merchants needed to get their goods to the Shenandoah, and they would need to build a railroad on the land," Washburn said. "He thought it would go through the middle of the parcel, and he was right."

The crowd at the community center filled the Jo Ann Rose Gallery to capacity, and several audience members said they were interested to hear about the land’s role in relation to the rest of the county.

"It was neat to hear about how these places started out as the same bundle, and then became Herndon, Reston, Great Falls," said Peter Saules of Reston. "It’s funny how all these boundaries that mean so much when it comes to mailing, schools, tax districts and that sort of stuff were often created by a seemingly random decision a few hundred years ago."