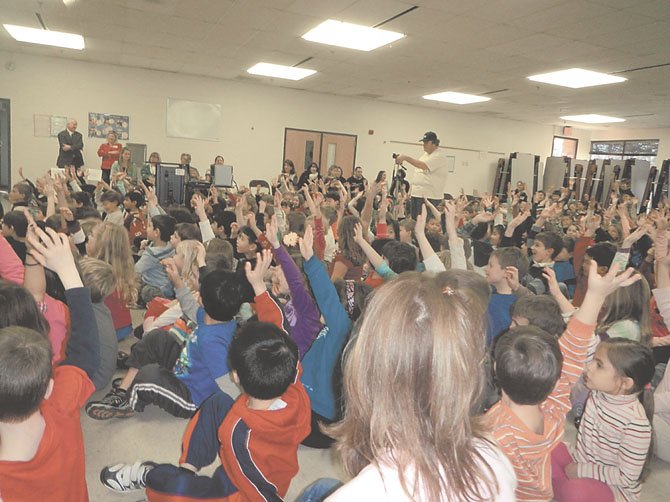 Nearly every student raised their hand when Paquin asked if they had seen "Dolphin Tale." Photo by Mary Grace Oakes

By By Mary Grace Oakes

Paquin is one of the marine biologists who helped to rescue and rehabilitate Winter, the dolphin featured in the film "Dolphin Tale." He shared Winter’s story with the students, describing how after becoming entangled in a crab-trap rope, Winter lost her tail due to blood loss.

"As she tried to fight it more and more, the rope grew tighter around her tail. This stopped the blood flow, and the tissue died. Although the movie said that they had to amputate her tail, in reality her tail fell off because the tissue was dead," Paquin explained. 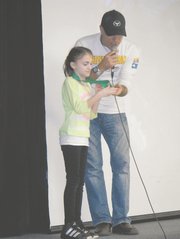 Forestville Elementary fourth-grader Taylor Betts, pictured with Brandon Paquin, shows the audience the medal she received for her involvement with the Weyland Foundation's Youth Ambassador Program. Taylor, who says she has "already started studying" to be a marine biologist, expressed concern that if water pollution continues, "I'm not going to be able to do what I love most when I grow up."

After a short film featuring footage of Winter’s rescue and rehabilitation was played, Paquin led a discussion about protecting the environment, calling fourth-grader Taylor Betts, a Youth Ambassador for the Wyland Foundation for the Environment to the stage. Taylor, who says she "got started" by "organizing a creek cleanup in my backyard", offered advice to her schoolmates on how to become involved with environmental protection efforts.

"Visit wylandfoundation.org…that kind of gets you started and knowing what’s going on. Then, find an animal that you really like, and read about them. Once you see what’s actually going on, you see that you can help," she said.

In the discussion, Paquin emphasized environmental responsibility, saying, "We make garbage. If we make it, it’s also our responsibility to throw it away in its proper place." He told students how they can help to save dolphins.

"Here in Virginia, you guys have dolphins, just like Winter…Do you guys want to be dolphin rescuers with me?" Paquin asked a crowd of cheering students. "Then…if you’re walking outside and you see a can or a bottle or plastic on the ground, go pick it up and put it in the garbage. And guess what? Right there, you’ve saved dolphins," he said.

The Wyland Foundation for the Planet is a non-profit organization that is dedicated to helping "children and families around the nation to rediscover the importance of healthy oceans and waterways" and to providing children with "the tools they need to become a more creative, positive, and solution-oriented." Visit www.wylandfoundation.org