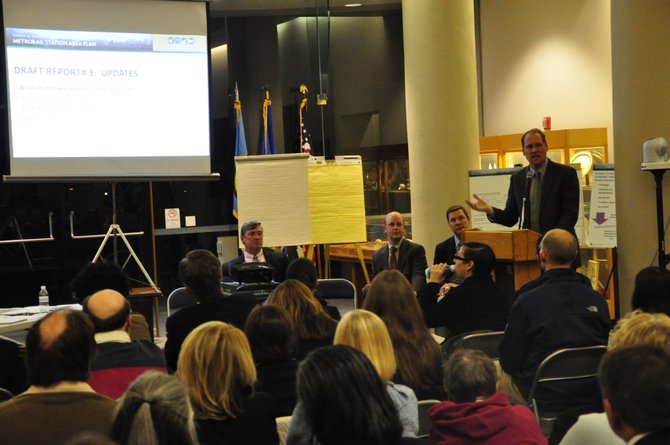 Herndon — The Town of Herndon and its consultants, Vanasse Hangen Brustlin, Inc., held a meeting Monday, Jan. 23 to update the public on the latest Metro development plan.

The plan, which was developed in December after errors in the previous draft were discovered, outlines "the policy and vision" for future development north of the proposed Herndon-Monroe Metrorail station, said Lisa Gilleran, the town’s director of community development.

"The plan we’re looking at is technically an amendment to the town’s Comprehensive Plan, and if approved it will serve as policy for the town in the future," she said. "This is vision and guidelines, it would allow developers to build at these densities after going through the standard process."

If the amendments were adopted, eligible properties would keep their existing conditions and zoning until the town adopts a new zoning designation and the owners submit an application to rezone and a specific development proposal.

"Herndon has a unique opportunity to be able to think about transit-oriented development ahead of time," said Geoffrey Morrison-Logan of VHB. "I think we’re going to be able to create an arrival and departure environment around the station that is truly a destination."

Planned transportation improvements for the area west of the proposed Herndon-Monroe Metrorail station.

TRAFFIC has been a major issue for many town residents. Of 25 questions that had been submitted before the meeting, 11 were about transportation, traffic and parking.

The plan examines 10 major intersections in Herndon, most part of Alabama Drive, Herndon Parkway or Elden Street, and shows what their projected level of service would be by 2035. Level of service is a way to measure the effectiveness of transportation infrastructure by looking at traffic flow.

Level of service ranks from A to F, with A being the best, and F the worst.

The plan calls for no intersection to fall below service level D, with several of the Herndon Parkway and Elden Street intersections predicted at C or better during morning and afternoon peak hours.

"I’ve read the reports and studies that say there will be some changes to traffic flow and that there won’t be an impact, but when they talk about thousands of new people living and working in the area, I find it impossible that there won’t be a negative impact," said Dan Olsen of Herndon.

According to the plan presented, less congestion isn’t necessarily a priority of transit-oriented development, as roads with more lanes make it harder for pedestrians to navigate the area, which throws off the balance the town is trying to achieve.

Planned transportation improvements for the area east of the proposed Herndon-Monroe Metrorail station.

Town staff and the Planning Commission created a vision statement for the core, saying "the Herndon Transit-Oriented Core is a distinctive employment center and residential neighborhood characterized by concentrated development that is vibrant, mixed use, transit-oriented and pedestrian friendly. Emerging development is interwoven with and strengthens the town’s cultural fabric and sense of identity."

The town’s Planning Commission has reviewed the plan in previous sessions, and will examine it in their next few meetings, with a possible decision coming at their Feb. 6 public hearing.

If recommended by the Planning Commission, the Town Council will begin discussing it, possibly as early as their Feb. 7 work session.

The plan can be found online at www.vhb.com/herndonmetrorail or