Draft plan will now be considered for adoption by Town Council. 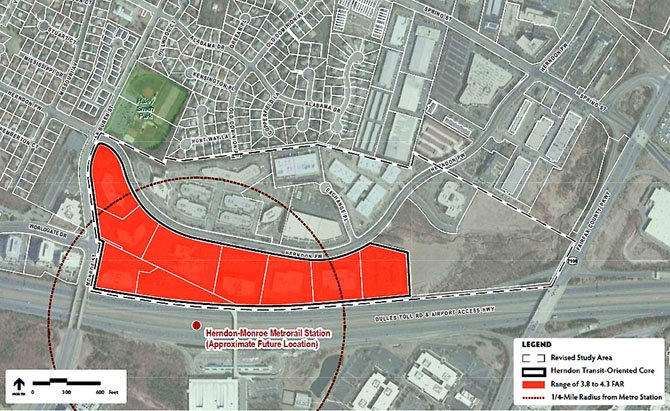 The Town of Herndon Planning Commission voted Feb. 6 to recommend the redevelopment plan for the area north of the proposed Herndon-Monroe Metrorail station to the Town Council.

Herndon — The Town of Herndon Planning Commission unanimously recommended a plan for the area north of the proposed Herndon-Monroe Metrorail station at their Monday, Feb. 6 meeting. The decision means the Comprehensive Plan Amendment that would allow for redevelopment will be passed on to the Town Council, which began discussions at their Feb. 7 work session.

"What we have arrived at tonight is a result of over two years’ worth of intensive study, consultations with the leading municipal design and economic development experts, concerted staff effort, joint work sessions with the Town Council, numerous public hearings, regular Planning Commission meetings and an unprecedented five public meetings devoted exclusively to the Metro station plan," said Kevin East, chair of the commission.

The decision is the latest in a process that began Dec. 14, when a new draft plan was submitted to the town after an error was discovered in the original draft.

THE PLAN’S GOAL is to create a metro station area that will incentivize transit-oriented development, include a strong residential component, identify the uniqueness of the town, give the town a positive return on its economic investment and increase the town ‘s tax base.

It calls for an increase in the amount of density allowed, a revised street network map that will include an extension of Worldgate Drive and other changes.

"There is an intention in the plan that the buildings will be of the highest quality office space, and that there will be vastly improved pedestrian and bicycle amenities near the Metrorail station," said Kay Robertson, senior project planner with the town.

According to the draft plan, if the seven million square feet of redevelopment called for happens by 2035, the town can expect around $6.7 million in net revenues from the increased tax base.

"This is just a first step of a long, long process that we’re all going to be going through with everybody in the town," said Kevin Moses of the commission. "It is not setting anything in stone, other than recommending to the Town Council that we proceed."

Commissioner Bernadette Bettard said she was "satisfied that this process we have gone through has brought out a lot of the challenges and issues, and we have provided a platform and forum for adequate public input and discussion."

TOWN RESIDENTS who attended the meeting were mixed in their response to the draft plan, with some calling it an essential step in planning for Herndon’s future, and others feeling as if the approval came too soon after the plan was revised.

"I feel like it’s being pushed forward, I’m not even sure that the town staff really believe in this plan, I feel like they feel like they‘re obliged to push a plan forward," said Doug Shuster. "Let’s take our time and get a really great plan, because this isn’t it."

Barbara Kellner said that the proposed plan contradicts itself in terms of identifying Herndon as a unique location.

"There’s no way that a 38-acre piece of land crammed full of 12 to 15-story buildings reflects Herndon’s unique identity, there is no area in the town that even comes close to the densities proposed," she said. "This plan is just too dense. As proposed, there would be approximately 5,000 new residents and 15,000 new employees in a mere 38 acres that are served by only two roads and three intersections."

But Mike Cooper said he felt the decision was an important step for Herndon’s future, saying "tonight’s action sends and important and powerful message that the town wants to compete with other localities for the highly desirable transit-oriented development along the Metro line."

The Town Council will host a public hearing for consideration of adoption of the Comprehensive Plan Amendment Tuesday, Feb. 14 at 7 p.m. in the Ingram Council Chambers at 765 Lynn Street.