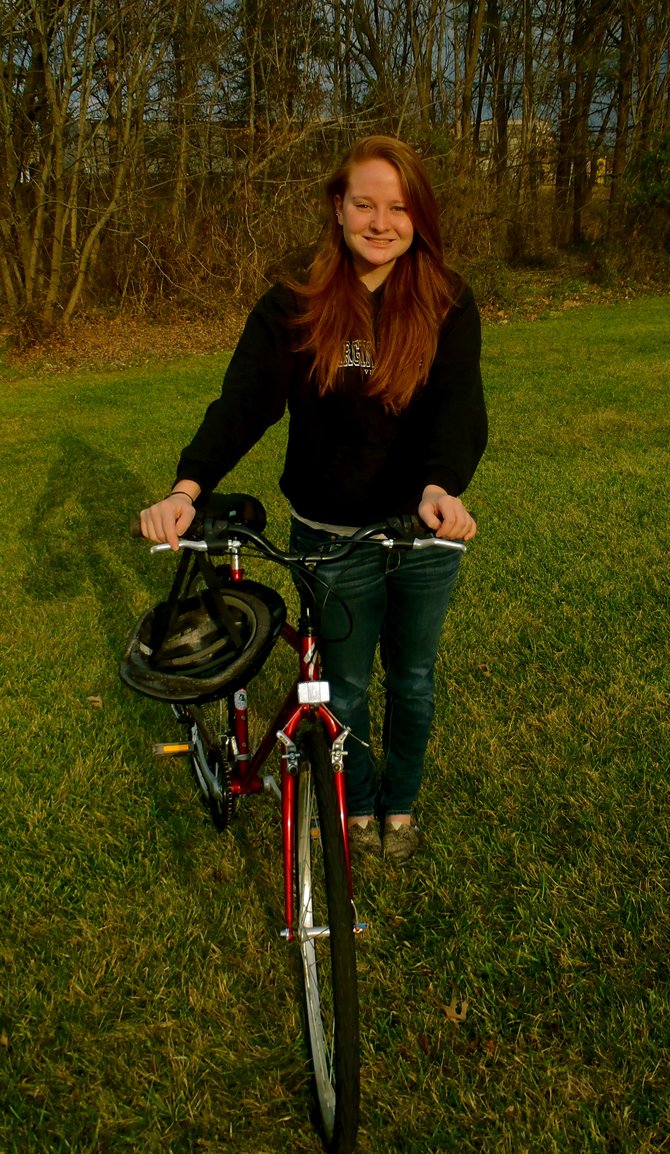 Herndon — As a rower, most of Cassandra Patterson’s long trips are over water. But this summer, she will take to trails and roads from Portland, Maine to Santa Barbara, Calif. to raise money and awareness for those in need of affordable housing.

Patterson’s trip is part of the Bike and Build program, where more than 200 cyclists will take seven different routes across the country, stopping along the way to speak about the need for affordable housing, and building a few on the way.

"I had a friend who did it last summer, and when he came back he was talking about it for months," said Patterson, a native of Oak Hill and currently a junior at Old Dominion University. "Since I’m not much of a biker, it will be new terrain for me, but I’ve always wanted to see the country, and this is a great chance to do it."

Patterson’s friend was Jacob Richardson, a fellow rower at Old Dominion. He freely admits that he talked about the ride nonstop when he got back to school last fall.

"I saw something about it on the internet, and just became consumed by the idea," he said. "It was by far the most incredible experience of my life, not just the helping people, but seeing the differences in the different regions of the country."

Patterson said after hearing about the issue, it made her determined to help the cause as well.

"Housing is a big issue in America, and it doesn’t necessarily get a lot of attention," she said. "With foreclosures and a lot of people struggling, it’s harder and harder to keep a roof over your head."

EACH GROUP consists of 30 cyclists and four supervisors, and they will travel between 60 and 100 miles per day. They will bike for four or five days, then stop and help different groups who are building houses for a few days.

Richardson said those stops are what etched the trip into his memory forever.

"I remember a stop in St. Louis, and the whole group of 34 of us showed up at this house where they were helping an elderly lady fix up her house," he said. "We fixed up the porch, her yard, the ceiling and other stuff and seeing how filled with emotion she was, and how grateful, was very special for me."

Patterson has already started her training regimen for the approximately 3,200-mile trip.

"I’ve been taking cycling classes three times a week at my gym, and once the weather warms up it will be time to start some long trips outdoors," Patterson said.

She will depart on June 16, arrive in Santa Barbara on Aug. 26, spend a few days there, then fly back and start her senior year days later.

In addition to helping build houses and raise awareness along the way, Patterson, who is majoring in Audiology said she thinks other areas of her life will benefit as well.

"I don’t think talking to groups of people is one of my strong points, but I’m going to have to do it on the trip," she said. Bike and Build began in 2003, and over the past eight years they have raised $3,387,200, including $605,000 last summer, and according to the organization, they are aiming for at least that amount this year.

PATTERSON NEEDS to raise $4,500 to participate in the ride. Her page can be found at http://bikeandbuild.org/rider/5598, and can be mailed to Bike and Build, 6109 Ridge Ave, Bldg 2, Philadelphia, PA 19128, with "Cassandra Patterson" in the memo line.

She will also be keeping a blog about her preparation and the trip itself, which can be found at pedalon2012.wordpress.com.