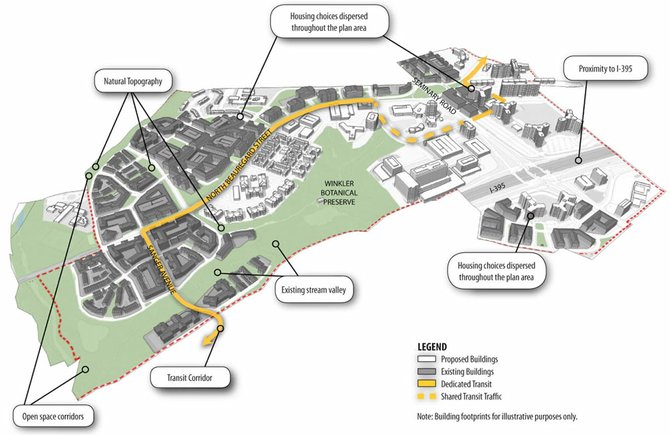 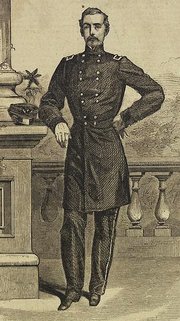 The West End of Alexandria was annexed from Fairfax County in 1952. 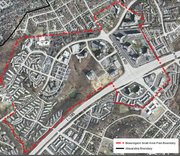 Alexandria planning officials are recommending a plan that would upzone 6 million square feet of existing buildings to 12.4 million square feet, asking for $148 million in exchange from developers to fund a fire station, pay for transit infrastructure and create dedicated affordable housing units.

Like the street that bears his name, Confederate Gen. Pierre Gustave Toutant Beauregard was difficult to manage. The hothead rebel couldn’t get along with Confederate President Jefferson Davis, and now his eponymous small area plan here in Alexandria could spark a few skirmishes in the city’s western theater. At the center of the debate is the future of thousands of low-income residents who live in a series of garden apartments slated for demolition.

“These people are going to be pushed out of the city,” said Esteban Garces, an organizer with Tenants and Workers United. “Many of these people make well below 50 percent of the area median income, and there will be nowhere for them to go.”

“The current affordable housing out there is subject to market conditions,” said Deputy City Manager Mark Jinks. “The market will, in effect, eliminate nearly all the affordable housing and this plan will preserve a large portion of it.”

SEVEN MAJOR LANDOWNERS in the West End have formed a partnership aimed at coordinating redevelopment efforts. The plan calls for more than doubling the existing square footage in 222 acres, redeveloping 6 million square feet to 12.4 million square feet. Upzoning the properties would dramatically increase the value of the land, which would benefit the landowners and developers. In exchange, city officials are asking for $148 million to fund a fire station, pay for transit infrastructure and create dedicated affordable housing units.

“This is huge,” said planning commissioner Donna Fossum during a public forum in September. “I’ve been on the Planning Commission for 22 years, and I’ve never seen any redevelopment of this magnitude in the city.”

City officials envision the redeveloped area as much more urban, transforming the intersection of Beauregard Street and Seminary Road into an ellipse and instituting a parking maximum of 1.3 cars for each residential unit in the multi-family buildings. The newly redeveloped area would complement a redeveloped Landmark Mall, which planners say would resemble Clarendon Commons or Pentagon Row. Some West End residents say they are uncomfortable with the scale of redevelopment suggested by the plan, echoing concerns of increased density that were at issue in the controversial waterfront small-area plan.

"What’s on the table now is more density than we need in the corridor," said West End resident Nancy Jennings. "All it does is give these property owners more value for their land."

THE QUESTION of what will happen to the thousands of low-income residents who currently live in the area looms over the proposal. Currently, city officials say they have no idea how many of the existing residents make enough money to meet the threshold for qualifying for the affordable housing units. That kind of information would be part of a specific demolition request.

“As buildings are proposed to be demolished, there would be a survey of who is there now,” said Housing Director Helen McIlvaine. “Anyone who is living there currently and is on the lease and is successfully living there and is a tenant in good standing wouldn’t be precluded from being eligible to move into an affordable housing unit when they are available.”

“These people won’t be able to afford that,” said Garces. “They are going to get rubbed out.”