Fourth of July celebration still on. 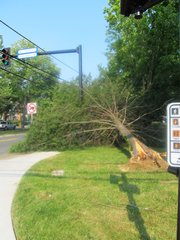 A tree uprooted by hurricane-force winds on Saturday, June 30, across from the City of Fairfax Town Hall at the corner of Armstrong Street and University Blvd.

City of Fairfax officials announced a state of emergency today as more power crews arrived in the city to restore electricity to the 900 homes still without power, according to Mayor Scott Silverthorne.

“The number is down from 10,000 –plus on Saturday,” Silverthorne said. “It’s my hope that those without power will be restored by this evening.”

According to Dominion Power, nearly 90 percent of city customers experienced a power outage after a wave of violent storms tore through the region Friday, June 29, downing power lines and trees.

“I’m extremely proud of Dominion, and our own City crews, who have been operating with little sleep to clear up this unprecedented and unexpected natural disaster,” Silverthorne said.

According to Ken Rudnicki, the city’s emergency coordinator, City officials declared a state of emergency, effective June 29, after determining that “resources were overwhelmed.”

“Basically, we’re making sure our ducks are in line to get federal assistance when and if it becomes available,” Rudnicki said, adding that a state of emergency allows the city to streamline procedures to obtain equipment and services needed for clean-up.

“Let’s say we needed a bulldozer. Normally, we’d have to go through (extensive) permitting process. Under the declaration, if we need a bulldozer we get a bulldozer,” Rudnicki said.

Silverthorne said the City’s Fireworks celebration, which draws nearly 20,000 people from all over Fairfax County, is still on.

“I’m asking (City Manager) Bob Sisson to put out that message late this afternoon. I think we all need something good to celebrate, but I’m hoping this will all be cleared up by tonight or tomorrow,” Silverthorne said Monday.