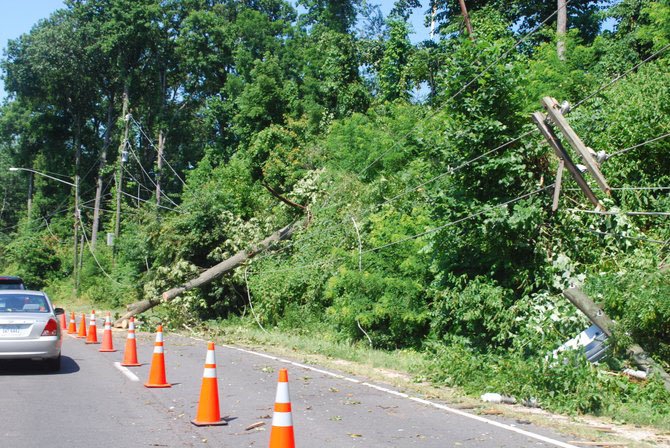 One person was killed while driving at the intersection of Old Keene Mill Road and Bauer Drive in Springfield. Photo by Amna Rehmatulla

Centreville — Winds of more than 70 miles per hour swept through Fairfax County Friday night. Power went out as the storm blew into the area around 10:30 p.m. with hurricane force winds sounding like a freight train.

The sound made some residents think a tornado was upon them, and many took refuge in basements.

THERE WERE AT LEAST TWO DEATHS in Fairfax County, both in the West Springfield area.

A 27-year-old Burke man, Khiet Hguyen, died when a tree fell directly on top of his car on Old Keene Mill Road near Bauer Drive, according to Fairfax Police. He was declared dead at the scene of the accident.

A 90-year-old West Springfield woman who was lying in bed died when a tree fell on her home on Carr Street at 11 p.m. Friday night. Another person in the home called 911 but was unable to reach the woman. Police and fire and rescue units responded to the home, but they needed a construction crane and specialized tree removal equipment to continue the recovery operation.

On Saturday early morning, 429,868 of Dominion Power’s Northern Virginia 831,900 customers were without power. Among those affected was the Fairfax County emergency 911 service.

Many traffic signals are out throughout the region. In Fairfax County, 130 traffic signals were without power on Saturday, according to county officials, who remind drivers to treat any intersection with a dark signal as a four-way stop sign.

Residents who get their water from the Falls Church Water system in portions of Tysons, McLean, Vienna, Dunn Loring and Merrifield were advised to boil their water before drinking it. Multiple water pumping plants throughout the region were without power, leading to calls for water conservation.

It will take at least several days, possibly as long as a week, to restore power to most customers, Dominion Power warned.

By Saturday night, there were about 340,000 Dominion customers in Northern Virginia still without power. By Sunday morning, that number was down to 285,000 households.

With temperatures predicted to be 100 degrees or greater, there were hyperthermia concerns about residents who are older or with disabilities. Supervisor Patrick Herrity was one of many who urged residents to check on their neighbors.

The county offered several heat relief options, including the RECenters in Lee District, Mount Vernon, South Run in Springfield, Cub Run in Chantilly, Oak Marr in Oakton, and the Burke Centre Library. Regional libraries with power were also open to the public. Many residents sought refuge from the heat in area malls.

The opening of Saturday’s round of AT&T National, organized by Tiger Woods and going on at Congressional Country Club in Bethesda, was delayed. When play began, the tournament was closed to the public, with players only allowed on course — no volunteers or spectators.

Neighbors were urged to check on seniors and those with disabilities.

Call 911 for reports of “hot” or sparking electrical wires, especially those on roadways.