A Herndon-based nonprofit aims to deliver food to those in need. 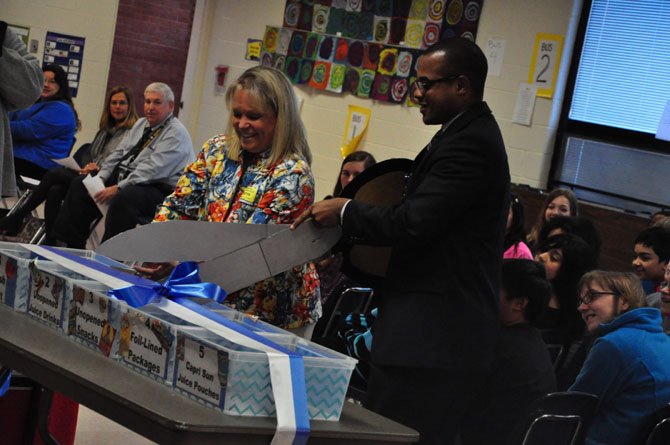 Herndon — In 1972, a group of churches in Sterling and eastern Loudoun County got together with the idea of providing food for the needy, with members storing donated food in their basement. Three years later, they made inroads into Fairfax County and it was eventually chartered as a nonprofit.

Forty years later, the group consists of 17 member churches in Herndon, Sterling Chantilly and Potomac Falls and has provided tens of thousands of families with assistance.

“Simply put, our goal is to provide emergency food for people who need it within 24 to 48 hours,” said Lisa Lombardozzi, president of LINK. “We deliver the food, because it eliminates the need for transportation for our clients, and we’ve got a lot of volunteers that come from all sorts of faith backgrounds.” 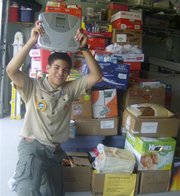 Gustavo Ardila collects more than 3,100 pounds for LINK’s food pantry as part of his Eagle Project. A Herndon-based nonprofit, LINK aims to deliver food to those in need.

cards, gently used clothing and toys for children. They also helped assist clients receive more than $24,000 a year in emergency rent and utility costs, though those clients are vetted by Loudoun and Fairfax County offices.

Last November, the organization got a shot in the arm, when Rep. Frank Wolf (R-10) included language in an agriculture bill that protected schools

who donated unused food to nonprofits. This has led to Dranesville and Herndon Elementary Schools donating perishable food (which they are able to store in refrigerators until needed) to those in need.

“We pick up food two to four times per week from schools and get it out to the people who need it,” Lombardozzi said. “One of the best parts about

that is the overwhelming donation of milk from the schools, we get hundreds per day, and in fact, we’re trying to find more takers for all the milk we’re getting, to share the abundance.”

as well as nonperishable. LINK now has the ability to take perishable items, which gives them a chance to provide more than just the usual canned

food. Meats can be frozen before they’re given out, and nutritious fruits and vegetables can be stored and distributed within 24 to 48 hours.

After storing food in their basements, soon volunteers were able to store it in a small donated space in a building on Waxpool Road. As the organization grew, they began storing in a building along Leesburg Pike in Sterling. The bank moved again to the Clocktower center when that development was demolished, before finally finding a permanent home on the grounds of the Herndon United Methodist Church in 1997.

“We used to be we worried about how we could reach out overseas and help the rest of the world, but now the world has come to us,” said Rev. Stephen Smith-Cobbs, pastor of Trinity Presbyterian Church in Herndon. “We do global missions, locally with the people who come from all over the world to be part of, and be served by the ministry here at LINK.”

LINK has narrowed its focus a little, they used to handle furniture and other items, but now focus primarily on food and emergency financial assistance.

Bob Ashdown used to volunteer with LINK a few times a year, until his retirement nine years ago.

“I was looking for something to do, and the concept of feeding the hungry really attracted me,” he said.

Ashdown now runs the food pantry, which he says has seen increased demand in recent years.

“We saw a particular spike in starting around 2007-2008, and last years we served about 1,800 people at our annual holiday drive,” he said. “That’s about a 20 percent increase from the last holiday season.”

LINK’s holiday program also created holiday baskets with $49,410 in grocery store gift cards and more than 110,000 pounds of food for holiday baskets. They also collected about 2,300 used winter coats, mittens and sweaters, which were distributed to more than 400 eligible families.

“A few Christmases ago we were scheduled to get about two feet of snow on the day of our distribution, so we had hundreds of volunteers come together to Friday night before and the Sunday after the snow to make sure everything got out,” Ashdown said. “It was amazing to not only see so many people geared up to help people, but to see how willing they were to adjust to circumstances to help others.”

Judith Schoonover remembers going on a food delivery for the first time when she went with her son.

“When we arrived at the home the whole family was there to greet us, they invited us in to put the food on the kitchen counter, and we saw that there was no food in the cupboards, they were bare,” she said. “Some of the family members immediately started getting into the food and making sandwiches for the children. So I know that there are people in this community that don’t have food in their pantry, they don’t have food in their refrigerator. This happens all year round, and there are people that need help all year round.”

Lombardozzi says the group is always looking for more volunteers, and even though it’s the beginning of summer, they are already in full swing preparing for their clothing drive for the start of the next school year, and finding business and individuals who are willing to donate to their holiday program.

More information on LINK can be found at www.linkagainsthunger.org.