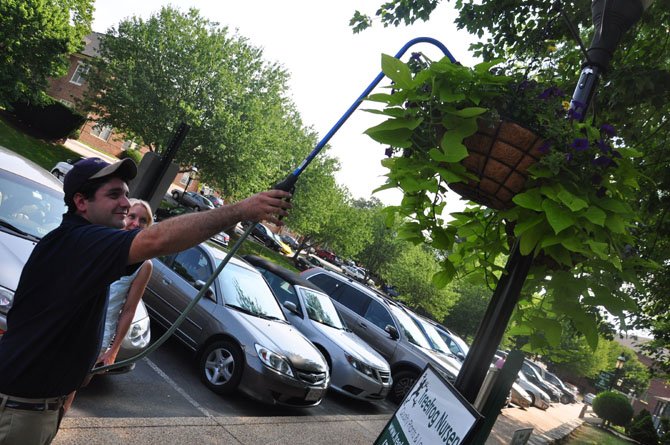 George Benza of SGB Land Management waters one of the 50 flower baskets that have been placed around businesses in and around the Great Falls Village Centre. Photo by Alex McVeigh. 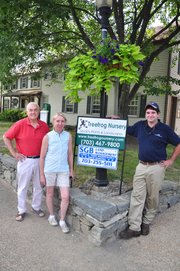 From left, Glen Sjoblom of the Great Falls Citizens Association, Joanne Shumpert of Treefrog Nursery and George Benza of SGB Land Management next to one of the flower baskets that have been installed around Great Falls.

“The idea for this project started a long time ago, and then the GFCA decided it would be a good idea to cooperate with the businesses,” said Glen Sjoblom of the GFCA. “We wanted to involve only local companies, so that’s who we put bids out to, everything from the flowers, to the planting, to the watering service.”

The flower baskets are filled with leafy greens and flowers of yellow and purple, hanging in 18-inch diameter baskets lined with cocoa mat. The plants were specifically chosen for their heat resistance, so they would survive in sweltering summer temperatures, even though most will be in the shade for the majority of the day.

“Each basket contains 11 plants, made up of scaevola, lantana, petunias and sweet potato vine, which give a few different colors and some dangling vines,” said Joanna Shumpert of Treefrog Nursery, who put the baskets together. “We planted them and put up the baskets and brackets to attach them to the light poles in the area.”

The Safeway shopping center is currently undergoing replacement of its light poles, so it was not included this year, but Sjoblom said he’s hoping the program continues after this year and eventually expands. Steve and George Benza of SGB Land Management will be handling the watering of the baskets.

“We originally planned to water every other day or so, but with the heat we’ll be coming out every day,” George Benza said. “And we’ll be keeping an eye out for Japanese beetles, which are definitely after some of the plants.”

MANY VISITORS to the village centre have already picked up on the new vegetation places around. “They add a nice, natural touch to the area. Since

Great Falls is known as a place that emphasizes nature, it’s appropriate,” said Emily Masters of Great Falls. “It’s nothing that’s too ostentatious, but it’s a nice accent to the area and I know I’ll be keeping my eye out for the other ones around.”

Sjoblom says the flowers will probably bloom for about four months, until September. Next year he says they will possibly examine different flowers with different colors and other characteristics.