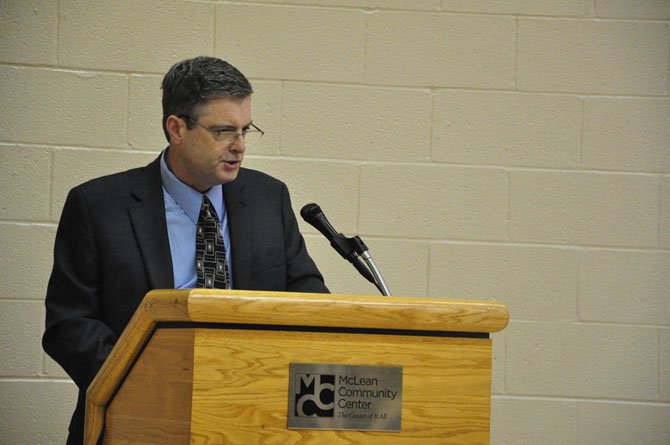 Rob Jackson, outgoing president of the McLean Citizens Association, was recognized as Lord of Fairfax for the Dranesville District. Photo by Alex McVeigh.

McLean — Rob Jackson, who served the most terms as president in the history of the McLean Citizens Association, was honored by the Fairfax County Board of Supervisors as Lord of Fairfax for the Dranesville District. Jackson, the outgoing president, became involved in community affairs after a random encounter years ago.

“I went to a birthday party to pick up my son and met an MCA member who mentioned they were looking for someone to be on the Budget and Taxation committee,” he said. “It was supposed to be limited to a one night a week thing, and had you told me then that I’d eventually be president, I would have laughed.”

Jackson said he’s always had an interest in good government, and that he just happened to be in “the right place at the right time” when it came to the MCA and its increasing involvement in planning long-term issues like Tysons Corner redevelopment.

“I enjoy working with people who might not necessarily agree, but have good intentions,” he said.

Jackson said the work that sticks out the most in his mind was the work on Tysons Corner, where the MCA was able to get a seat at the table and work

with the county as the new plan was developed.

“Working on the Tysons Task Force certainly sticks out in my mind, when that plan was endorsed and adopted it was of major significance, and it was

great to see county staff so willing to work with residents,” he said. “It sank in when I got a call from a reporter from Time magazine about Tysons Corner and the work that was being done. I appreciated that because it showed that the MCA as an entity was working as a problem solver for the community, we weren’t just something that was putting up roadblocks.”

Supervisor John Foust (DDranesville) said he chose Jackson because of his many contributions to the community during his tenure at the MCA, particularly as president. “Rob led the MCA’s successful efforts to ensure that the concerns of the McLean community were considered as the comprehensive plan for Tysons was revised,” he said. “I also wanted to recognize Rob’s support for the county’s efforts to finally resolve the long-simmering issues with Falls Church Water.”

Foust, who has served as MCA president as well, said he can appreciate how tough the job can be, and commended Jackson for being the longest tenured president.

Though he has handed off the reins of the MCA, Jackson will be joining the Fairfax Federation of Citizens Associations as First Vice President.

“I like the things [President] Tania Hossain is trying to do, and after some soul searching, I decided I wanted to be a part of it,” he said. “I guess compared with the MCA, it’s a newcomer, it’s only been around 71 years.”