Loudoun County Board by a 5-4 vote ‘opts in’ on extension of rail into their county. 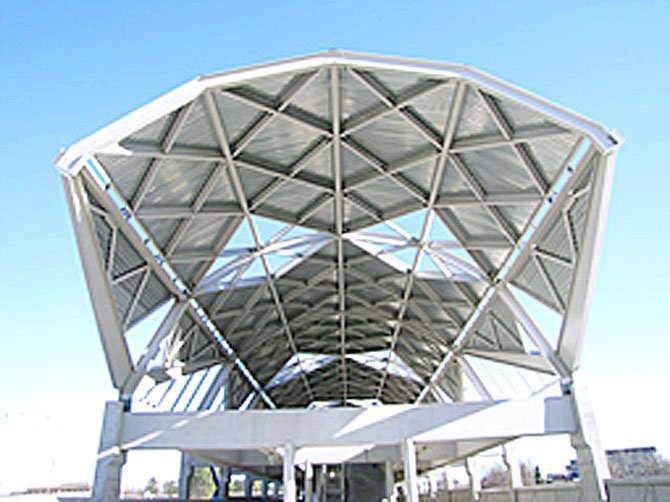 The Wiehle Avenue Station in the median of the Dulles International Airport Highway just west of Wiehle Avenue is the most advanced. Photo by Chuck Samuelson/ Dulles Rail Project

Considering it is a hard fought presidential election year and a time of enormous financial anxiety, the Loudoun County Board of Supervisors took a vote of amazing courage or astounding foolhardiness and backed the extension of the Silver Line Rail into their county.

By a 5 to 4 vote, the nine member county Board of Supervisors agreed to fund a 4.8 percent share of the $5.6 billion Metrorail lines capital cost or some $270 million dollars, build two rail stations in the county and pay $18 million a year toward the potential cost of Metrorail extending its service.

Loudoun’s "opting in" increased the likelihood the 23 mile rail line from West Falls Church to Washington Dulles International Airport will become reality 50-years after the airport opened to flights in 1962. The airport has served 500 million passengers since it opened and has become a major economic growth center for Northern Virginia.

It also had practical importance for Fairfax County, according to Loudoun Board President Scot York (R-at large.) If there were no Loudoun stations, he foresaw a flow of commuters to the subway stations in Fairfax County sufficient to cause them to be redesigned since Dulles Airport officials said they could not accommodate commuter parking.

Ralph M. Buona, (R.-Ashburn) told his colleagues last Tuesday (July 3) that a vote for the Silver Line was a "vote for the future …you can vote for your kids, your grand kids and your great grand kids."

THE BACKERS OF SILVER LINE said its construction would position the county for enormous economic growth over the next thirty years estimating the county’s gross product as $80.7 billion by 2020 and $132.8 billion by 2040. Utilizing a study by George Mason University’s Stephen Fuller, the backers claim it will result in creating thousands of jobs within the county and not solely relying on Loudoun residents finding work elsewhere.

The opponents on the Board, like Vice Chairman Marcia Clark (R-Blue Ridge), argued that the expenditure estimates are way below what will unfold for the county and that the gains in economic growth over what would have been produced by an efficient bus system are illusory.

Eugene A. Delgaudio, (R-Sterling) called the project a "boondoggle;" a system that was never needed and would not relieve the critical traffic problems of the county. Throughout the debate, Delgaudio included in his remarks severe criticism of President Obama and pressed a conservative view of the project.

Though all members of the Board are Republicans elected to reign in county spending, the Silver Line issue became caught up in a broader national debate on the use of public funds. The Americans for Prosperity paid for thousands of robo-calls against the project. The group has been supported by the Koch brothers, wealthy Kansas oil men committed to defeating President Obama. The Washington Post reported that Audrey Jackson, president of the group warned the supporters of the Silver Line how the group will watch how it is paid for.

Two elements contributed to the rail project’s victory. On June 29, the board created a tax district to pay for the $270 million which has only a handful of residential tax payers in it. The burden of the cost will be born by the businesses located in this tax district and the later residents attracted there. In effect those who will profit from the rail line will pay the tax burden. This tax method is the same device used in Alexandria to fund costs of a proposed Metro stop in the Potomac Yard area. It must be confirmed by a public hearing in Loudoun later in the year.

The second element was the shift by Ken Reid (R-Leesburg) from a position of active opposition to the Silver Line to its support. His move is as mysterious as Supreme Court Justice John Roberts’s decision to back elements of the Obama health care plan.

Clark (R-Blue Ridge) wrote a letter to her constituents on June 7, setting out her concerns. She said although the line’s extension was considered for years, the "prior boards merely endorsed the concept of rail to Loudoun, they did nothing to establish a means for paying for it."

She said the original concept was that the rail line would be paid for by federal dollars and state funds, but now there are no federal dollars and Virginia’s one time contribution of $150 million will only be enough to "buy down the Dulles Toll Road/267 tolls for two years," she said.

Some 54 percent of the funding must come from Dulles Toll Road revenue. The tolls, which will grow astronomically as the costs of the rail grow, are considered a tax on the people of Loudoun. There is a lawsuit in federal court that may threaten the tolls as a funding source for the Metro. The class action suit challenged MWAA’s authority to level taxes under Virginia law and may be decided later this year.

Clark writes the Silver Line Metro won’t be running until 2017 so the county will have to build the stations before the revenue from station parking begins.

Fuller, the director of the George Mason University’s Center for Regional Analysis, prepared a report in March which warned, if Loudoun does not go along with the Silver Line, "the county’s economy will grow more slowly, driven by gains in lower value added employment and imported income earned by residents commuting to jobs located outside the county." He saw a loss of $11.2 billion in foregone economic activity in 2030 and $25.6 billion lower gross county product in 2040 "than had Metrorail been extended to the county as planned."

Throughout there has been major criticism by Republicans of the MWAA’s unwillingness to answer to any level of government. MWAA was forced to abandon an extensive underground welcoming facility at Dulles and late last week agreed to cancel a labor rule that favored organized labor under pressure from the governor and Rep. Frank Wolf, (R-10). Wolf has urged a federal inspector general be appointed to oversee MWAA’s finances.

After MWAA agreed to abandon the labor agreement, Gov. Bob McDonnell strongly backed Loudoun "opting in" on the Silver Line. Wolf said earlier this month that he firmly supported the Silver Line serving Loudoun County. He called it the most important project since the original Metro system.

FAIRFAX B.O.S CHAIRMAN Sharon Bulova has called upon Fairfax’s federal representatives to work harder to reopen the question of federal funds for Phase 2. Some $900 million in federal money has been contributed to Phase 1 of Dulles Rail, which runs through Wiehle Avenue in Reston and will be completed in 2013.

She quoted Transportation Secretary Ray LaHood saying that Metro is "America’s system providing millions of riders to the nation’s Capital" and the federal government needs to find money in its 2013 and 2014 budgets to complete the project.