A Decision Time for Silver Line

Deadline approaches for Loudoun County Board vote on extending the rail into county. 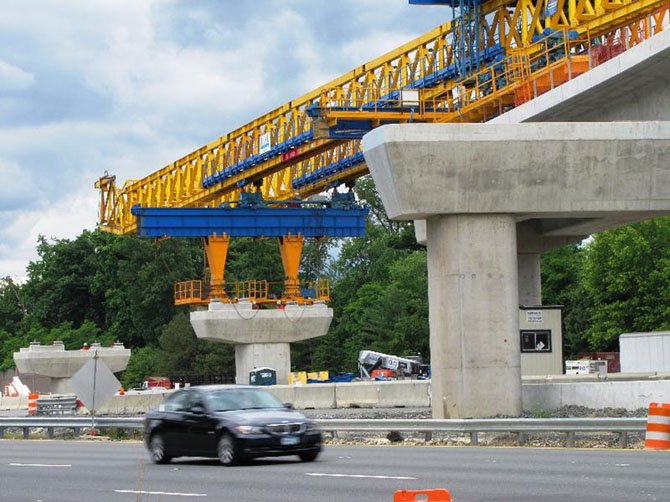 Crews continue to use a huge bright yellow horizontal crane to build the bridges for rail from Route 7 to the median of the Dulles International Airport Access Highway/Dulles Toll Road. This work is expected to be completed in July. Photo by Chuck Samuelson/Dulles Corridor Metrorail Project

Whoever coined the quip "like herding cats," must have had in mind the financing of the Dulles Rail Project. It requires getting consensus from two county boards of supervisors, Fairfax and Loudoun, the Federal government, the Virginia government and therefore the governor and state legislature and the Washington Metropolitan Airport Authority.

The project’s course, so far, brings to mind another quip; "the perils of Pauline." From an argument over a tunnel under Tysons Corner to disputes about underground facilities at Dulles Airport, the project has slipped from one crisis to another. Even if the rail project’s second phase were to go smoothly from here on out, it will take as long to build the 23 mile metro line as it took to build the Transcontinental Railroad.

However, the word "smoothly" does not seem applicable since the most recent "peril" is the Loudoun County Board of Supervisors.

In the 2011 elections, Republican candidates won every seat on the board in a voter rejection of the spendthrift actions of their predecessors.

THE NEW BOARD has approached the funding question with suspicion, but must make a decision to opt in or out of the project by July 4. If the board supports the project, the county will have to pay some $270 million in construction costs and $11 million a year to help finance Metro’s operating costs.

The members have met several times over the past few months trying, without success, to find methods to fund the county’s share.

The board has set one more meeting before the fourth.

Vice Chairman Janet Clark (R-Blue Ridge) wrote a letter to her constituents on June 7 setting out her concerns. She said although the line’s extension was considered for years, the "prior boards merely endorsed the concept of rail to Loudoun, they did nothing to establish a means for paying for it."

She said the original concept was that the rail line would be paid for by federal dollars and state funds, but now there are no federal dollars and Virginia’s one time contribution of $150 million will only be enough to "buy down the Dulles Toll Road/267 tolls for two years," she said. Some 54 percent of the funding must now come from Dulles Toll Road revenue, she said. The tolls, which will grow astronomically as the costs of the rail grow, are considered a tax on the people of Loudoun. There is a lawsuit in federal court that may threaten the tolls as a funding source for the metro. The class action suit challenged MWAA’s authority to level taxes under Virginia law and may be decided later this year.

Clark writes the Silver Line Metro won’t be running until 2017 so the county will have to build the stations before the revenue from station parking begins.

Clark warned her constituents that there could be tax districts formed in the rail areas and "possibly a county-wide tax on commercial and industrial properties." In some incorporated towns, she said, there could be three levels of tax, a development "that could put some of our small businesses out of business."

On Tuesday Clarke and two other board members said they wanted an extension of the deadline until December, but BOS chairman Scott York (R-At large) said there would be no extension and the decision must be made on July 4.

At this juncture, people who followed the debate believe that there are four members of the nine member board in favor of the Silver Line and four members against. Board member Suzanne Volpe of the Algonkian District, a Republican, is reportedly uncommitted. Volpe is a resident of Sterling, Va. The vote is so unclear, however, that nobody wanted to be quoted guessing the outcome.

AS THE DEADLINE NEARS, there is growing ire on either side of the debate. Right wing groups have attacked the Silver Line project as a tax. According to the Washington Post, a group funded by the Koch brothers, a pair of conservative Kansas billionaires, have conducted robbo calls in the county saying that funding the Silver Line will mean a "bailout for developers."

Clark and other opponents claim they have faced "strong-arming and veiled threats by some developers and elected officials."

Stephen S. Fuller, the director of the George Mason University’s Center for Regional Analysis, prepared a report in March which warned, if Loudoun does not go along with the Silver Line, "the county’s economy will grow more slowly, driven by gains in lower value added employment and imported income earned by residents commuting to jobs located outside the county." He saw a loss of $11.2 billion in foregone economic activity in 2030 and $25.6 billion lower gross county product in 2040 "than had Metrorail been extended to the county as planned."

Throughout there has been major criticism by Republicans of the MWAA’s unwillingness answer to any level of government. MWAA was forced to abandon an extensive underground welcoming facility at Dulles and late last week agreed to cancel a labor rule that favored organized labor under pressure from the governor and Rep. Frank Wolf, (R-10). Wolf has urged a federal inspector general be appointed to oversee MWAA’s finances.

But Wolf said earlier this month that he firmly supports the Silver Line serving Loudoun County. He called it the most important project since the original Metro system.

Fairfax BOS chairman Sharon Bulova has called upon Fairfax’s federal representatives to work harder to reopen the question of federal funds for Phase 2. Some $900 million in federal money contributed to Phase 1 of Dulles Rail which runs through Wiehle Avenue in Reston and will be completed in 2013.

She quoted Transportation Secretary Ray LaHood saying that Metro is "America’s system providing millions of riders to the nation’s Capital" and the federal government needs to find money in its 2013 and 2014 budgets to complete the project.

Jack Potter, president and the chief executive officer of MWAA, has said that even if Loudoun opts out of the project the Silver Line will be built.