Practicing What They Preach
Votes

Practicing What They Preach 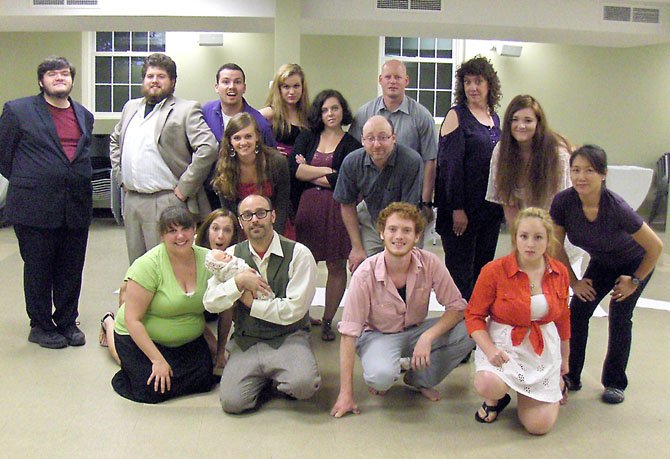 The cast of the City of Fairfax Theatre Company’s production of "Into the Woods." (Not pictured is Wendy Knight). Photo by Bonnie Hobbs. 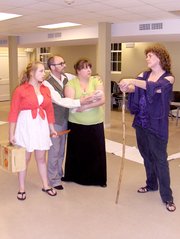 Six drama teachers headline the cast of the City of Fairfax Theatre Company’s summer production of "Into the Woods." They include Fairfax High’s Wendy Knight and Paul Rubenstein and Woodson High’s Terri Hobson.

"We have a very talented cast," said Director Cate Brewer, who acts and directs in Washington, D.C., and teaches acting at the University of Mary Washington. "Most of the six teachers were actors before they were teachers, or they have acting experience. And because of that, they’re able to raise the show’s level of professionalism and help the younger actors."

This Stephen Sondheim musical features a cast and crew of about 35, plus a 13-piece orchestra. "We were lucky – a lot of talented people came to the auditions," said Brewer. "It’s been wonderful directing them because they make good acting choices and know what they want their characters to be."

She said the story’s funny; but at the same time, there’s a much deeper message. "We all wish for something we don’t have," said Brewer. "And once we get it, we’re either not satisfied or we realize that it doesn’t equal happiness. In the selfish pursuit of getting what you want, you’re willing to sacrifice everything and everyone. But the only way people can get things done is to work together."

Similarly, helping to create the show are Musical Director Matt Jewell, Youth Director Beth DeMarco and Hobson’s daughter Carly, who’s putting together the costumes. And besides acting, Knight’s the technical director; she also designed the set and built it with interns. And she and the Fairfax Academy’s Mike Replogle are the theater company’s co-artistic directors.

A DARK COMEDY, "Into the Woods" intertwines the fairytales of "The Baker and His Wife," "Cinderella," "Jack and the Beanstalk" and "Rapunzel." Act I ends with happily ever after – and Act II tells what happens afterward. All the fairytales collide and the plots and characters go awry; they’re then connected in ways that’ll surprise the audience.

Fairfax High English teacher and Improv Club leader, Paul Rubenstein, narrates the play. "The narrative drives the action," he said. "I have to know what comes when, so the actors know what they need to do." His favorite song is "Agony" because "it’s funny and campy. The way Cinderella’s and Rapunzel’s princes sing it, it’s hilarious."

Rubenstein said the audience will like "the honesty we bring to the production. Every character is true to their fairytale and to themselves and strives to achieve a goal, whether good or bad. The story has depth and isn’t the typical fairytale. People will also enjoy the lush harmonies and intricate melodies of the songs. If they like musical theater, they’ll have a good time."

Portraying the witch is Woodson Theater Director Terri Hobson. "I feel a strong connection to her because everything she does is to protect her ‘child,’ Rapunzel," said Hobson. "She doesn’t want Rapunzel ever to leave the tower and go out because she knows the world is dark, bad and dangerous. So the witch does everything she can to get her to stay. In her eyes, she’s keeping Rapunzel safe."

Hobson loves her role. "There are a lot of words and they come out fast," she said. "But it helps me reconnect with what my theater students have to do. And my part has such great writing. The witch is sarcastic, funny and witty, but also has a dark side, so she gets to show a whole range of emotions."

She likes the song, "Last Midnight," best because "I really get to cut loose in it and rant – and I don’t get to do that every day." She said all the performers are fun to watch so the audience will enjoy the show. "We all have really good chemistry with each other," said Hobson. "They’ll also love Sondheim’s brilliant music and lyrics, plus James Lapine’s clever script."

Fairfax High Theater Director Wendy Knight plays the ghost of Cinderella’s mother, who died when Cinderella was very young. "Cinderella planted a tree at her grave and cried so much that the tree grew and contained her mother’s spirit," said Knight. "So Cinderella talks to her there."

Knight enjoys singing her role. "It’s a high soprano, very ethereal and lyrical," she said. "My favorite song is ‘Stay with Me.’ It’s gorgeous – the lyrics are so moving, sad and poignant, as the mother tries to tell her ‘child’ what the world’s really like."

Noting that this is the theater company’s fourth summer musical, Knight said, "The caliber of each, individual actor is so high, there are no weak links in the entire show. Each one could have been the lead – they’re all that good. And the story takes what you know about these fairytales and turns them on their ear."

She’s also the show’s technical director and says the special effects include a fake chicken that runs on stage by itself, plus magic lighting effects from the witch’s staff.

SEVERAL FAIRFAX HIGH STUDENTS and alumni are also involved in the production. Both acting majors in college, 2012 grad Mike Anderson and 2011 grad Jess Rawls, respectively, are understudying all the male and female roles.

"It gives me different perspectives of the story, plus more experience," said Rawls. "It’s tough, but fun. The show’s family-oriented, but gets dark and more realistic in the second half. It’s the idea that life is not a fairytale."

Anderson said everyone can relate to what happens: "Wanting something, getting it and finding out it’s not really what you thought it would be – and then dealing with the consequences."