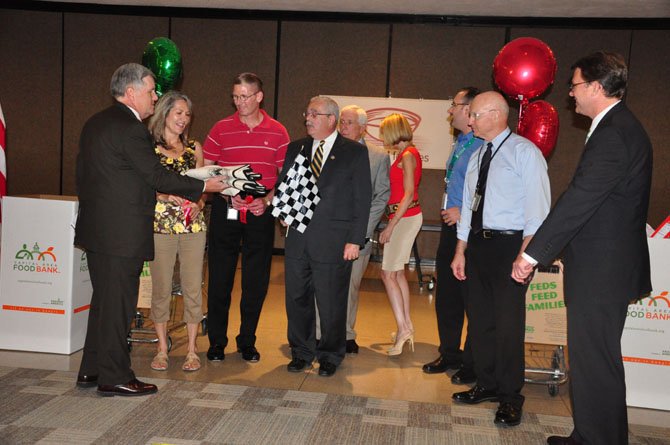 Reston — Many local food banks go for an extra push around the holiday season, trying to help the area’s less fortunate make it through the end of the year with extra food, maybe even a few gifts. But that changes during the summer, with schools out and people on vacation, food banks can find their supplies dwindling, even when the demand does not.

It was with this in mind that Rep. Frank Wolf (R-10) and Rep. Gerry Connolly (D-11) helped kick off the annual Feds Feed Families program at the U.S. Geological Survey’s Reston headquarters Monday.

"Summer is a particularly difficult time. In my district, all the schools do food programs, but school isn’t around in July, August and they have a hard time in September," Wolf said. "Secondly, with the loss of power that many of us experienced, people had to throw out a lot of food. If you’re a family that’s struggling, you had to toss food you were counting on. Also, some of the food banks lost their power and lost much of the food they have." 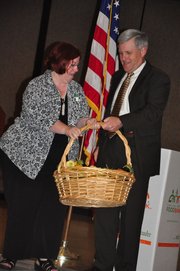 This is the third year of the Feds Feed Families program, which collects nonperishable food items. Since its inception, it has collected more than eight million pounds of food during that time.

"Last year we were trying to raise two million pounds, and we exceeded it by so much, we’re not going to even have a goal this year," said David Hayes, Deputy Secretary of the Interior. "This year, our goal is simply to beat our best, not have a specific number of pounds, but to just go for it."

"This program was started because in the summer months there was a drop off in contributions, even though the demand is continuing, even increasing, we didn’t feel the importance of continuing to support these food banks was there," said Marcia McNutt, director of the USGS.

Connolly spoke to the need of many in the county, that despite its affluence, there are still people in need.

"Over 30 percent of kids in Fairfax County, the 11th largest school district in America, are on free or reduced lunches," he said. "The need is real. We have real pockets of underprivilege here, real pockets of real needs. Reston Interfaith reports that in the last 12-month period, they have seen the highest demand ever recorded on its food bank. Stocks can run low, but the need does not."

John Barry, director of the Office of Personnel Management, stressed the importance of the program to food banks around the country, particularly in the local area.

"Locally, this program has been a lifeline for food banks in community after community, from Winchester to St. Mary’s on the Eastern Shore," he said. "It has made a difference for so many communities, so many families. This year, when families have lost power and lost their food supplies in their fridge and freezer, they are going to rely on a food bank to restock. And we can help."

Food donations boxes are placed around the USGS and many other federal workplaces throughout the summer. More information, including a list of needed items, can be found at www.fedsfeedfamilies.org.