More than 800 books purchased in memory of former principal. 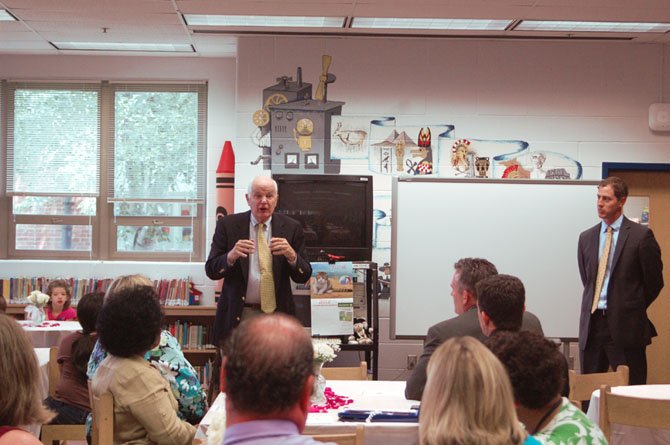 Mount Vernon — Woodley Hills Elementary School held a private book dedication ceremony on June 11 in memory of the late Dr. Joan Freck, the school’s principal from 1985-1991. Prior to her death she had made it known to her family that, in lieu of flowers, she wished to have friends and family members make donations to her “beloved Woodley Hills.”

This money would then be used to purchase books for its library, as she was such an advocate of reading. A Joan Freck Memorial Fund was established and donations began pouring in from those who knew and loved her. By the beginning of June 2012, the memorial fund had received more than $7,000 in donations, at which time the school librarian began feverishly purchasing books for the school library. Currently the library has purchased more than 800 new books through the Joan Freck Memorial Fund. Each book has a personalized bookplate placed on the inside cover inscribed with a poem and personal message: “In loving memory of Dr. Joan Freck, Woodley Hills Principal, 1985-1991.”

The private ceremony began with opening remarks by Woodley Hills’ Assistant Principal Willisa Toney. Student Council President Qwenada Moore and Student Council Vice President Kelsey Gardner gave the welcome speech and read a dedication poem. The Woodley Hills Chorus, led by Jennifer Downham and Grace Schiffler, sang songs in remembrance of Joan Freck. Third grader Ruby Cabrera expressed her excitement over the selection of new books she will be able to read next school year, while Ruth Diffenbaugh, the school’s librarian spoke to the family about her gratitude to the Freck family for their generosity. Peter Freck, and two of his three sons who were able to attend, were presented hand-made thank you cards from Woodley Hills’ third grade and kindergarten students. Two current employees, Liz Imphong and Carol Burroughs, spoke about their memories of Joan Freck, followed by closing remarks from Woodley Hills’ Assistant Principal Paul Basdekis.

Concluding the ceremony Peter Freck thanked the audience, expressing how moved he and his sons were by the outpouring of gratitude from the staff and students of Woodley Hills, and how proud he was that his wife had made such a positive impact.