Sequoia Farms Has a Busy Week 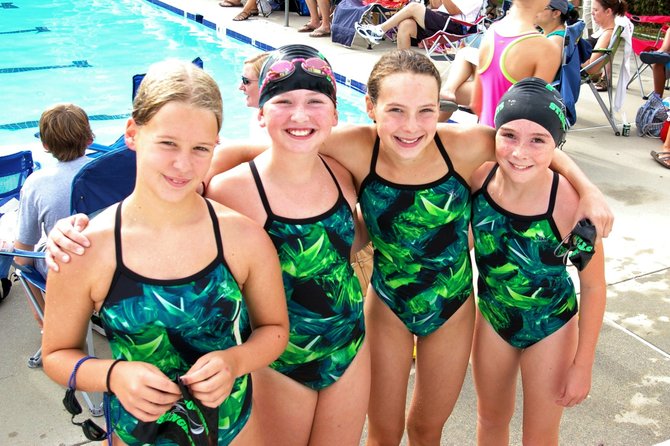 Well, if you needed something to do this week and you were a member of the Sequoia Farms swim team, you certainly were in luck. There was the “IM Tough” meet on Monday, the “Tri-Meet” on Wednesday, the “Dual Meet” on Saturday, then the “Relay Carnival” on Sunday. Or, as many families in Northern Virginia might say during this time of year, “it was all swimming — all the time.”

The “IM Tough” meet at Chantilly Highlands gave swimmers the chance to test their times against some of the league’s best, in one of the few opportunities to swim the individual medley with a fresh start (without having to first swim an entire dual meet). The Stingrays had some outstanding performances here with Adam Bechtol, Ryan Bechtol and Diego Cromwell representing the team in the boys’ 8U IM. For the girls in the 8U, it was Diane Sellars and Lillianne Fish. Going for the 10U boys were Travis Blee, Andrew Watson, Connor Croxton and Avery Harris. The 10U girls included Sydney Loper, Lucy Blazquez, Brooke Williams, Julia Barrett and Sydney Fish. Ryan Morris represented the 12U boys. The 12U girls were Molly Hamer and Kate Croxton. Croxton dominated the field in her age group and was almost four seconds ahead of her nearest competitor. In the boys’ 14U IM, the Sequoia’s lone star was Brice Harris. In the 14U girls’ event, the Stingrays were well represented by Kelsey Hamer, Nicole Williams, Lauren Chin and Julia Hilburger. In the final event of the evening, it was Jessie Heise and Olivia Swientisky who competed in the 18U girls’ IM.

The next thing you know, it’s a sultry Wednesday evening at the Chase Club pool. Here, Sequoia joined with the Barrington Blue Fins as they and the host Sharks participated in a “Developmental Tri-Meet.” As with most tri-meets, swimmers and parents were packed to the ceiling as noise and a bit of uncertainty ruled the day. Times were recorded and improvements were made as the Stingrays approached the midpoint of the week.

When Saturday arrived, the Sequoia Farms Stingrays were craving a day in their own pool, but it wasn’t to be. The Stingrays traveled to Manorgate to face a large team, which has been having its own struggles putting a dual meet win on the board. The Marlins have been in some tight meets, but managed a pretty convincing win against Sequoia.

By the time Sunday finally rolled around it was time to saddle up again and travel to the Colonial League “Relay Carnival.” While Sequoia Farms couldn’t reach the winner’s circle as the overall champion in any event, within their own (Blue) Division the Stingrays came up with these first place finishes: boys’ 8U 100 medley (Blaine Harsh, James Williams, Diego Cromwell, Liam Santilli) and mixed 9-10 200 free (Travis Blee, Caroline Santilli, Sydney Loper, Avery Harris).