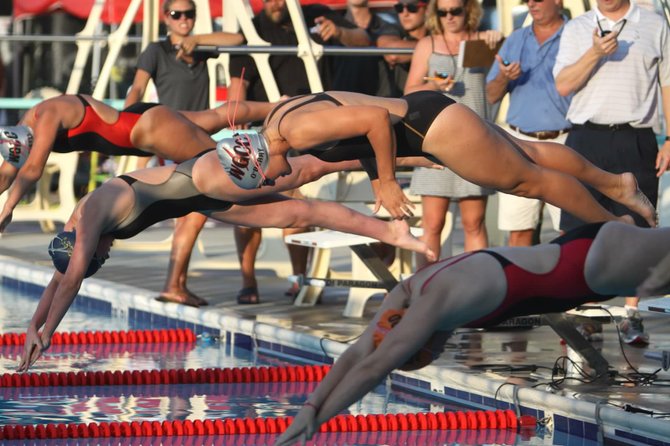 Last year, the WGCC Lightning swimmers lost the Country Club Swimming and Diving Association championship title by a half a point to Kenwood. Had any one WGCC swimmer finished one place higher during the two-day league championship meet, the team would have won. Many of the team's swimmers trained hard all winter with that half-point on their minds. This past week, the team moved three steps closer to claiming that title with decisive victories in three of their biggest meets this season.

In one of the most exciting weeks of competition in its history, the Lightning easily defeated their arch-rival Kenwood (and finished their dual-meet season with a record of 4-0), crushed the competition in the Division A relays, and were crowned the Division

A champions. They also broke over 20 CCSDA league and WGCC team records along the way.

On Monday night, the five teams of CCSDA's Division A met at Kenwood for the Divisional Relays. WGCC won 15 of 22 relays, and 12 of these wins broke existing CCSDA league records. Final scores for the meet were: WGCC 272, Kenwood 209, Congressional 172, Army Navy 161, Edgemoor 98.

On Tuesday night, WGCC hosted the Division A championship meet. The five teams of the league's top division reconvened to swim for the title of Division A champions. This meet has been very close in recent years, but WGCC swam to an easy victory. The final scores were WGCC 414, Kenwood 308, Army-Navy 247, Congressional 164, and Edgemoor 87.

This meet was the highlight of the season for the Lightning as they saw multiple team and league records topple, some of which had held for many years. Jillian Johnson swam the girls’ 12U 100-meter IM in a time of 1:10.58, breaking the CCSDA record set in 2004 and the WGCC team record set in 1982 by Christine Smith (Smith swam for WGCC in the late ‘70s and ‘80s, her multiple team records have proven very elusive to break). Later in the meet, Johnson broke a team record in the girls’ 12U 50-meter backstroke with a winning time of 38.38 (breaking another of Smith's 1982 team record). The next night, Johnson established a new team record in this event, winning against Kenwood in a time of 33.33.

Finally, on Wednesday night, WGCC hosted Kenwood for their final dual-meet of the season (this meet had been rained out a week earlier). Over the past five years, these two teams have battled each other for the top spot in the CCSDA. While the meet was expected to be close, WGCC dominated from start to finish and won decisively with a score of 331-155.

The Lightning head into their final meet next week, the league championships, where all 15 teams of the CCSDA will gather at Army-Navy for two days to determine which team will claim the title of the 2014 CCSDA champs.