Terrorists Across the Street
Votes

Terrorists Across the Street 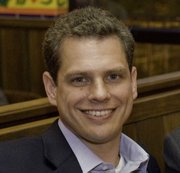 If it weren’t for the reported suspicions of Mark Gilleo’s mother, "Love Thy Neighbor" suspense novel may never have been written. The year before September 11, 2001, Gilleo’s mother, Diane Albritton, watched the house across the street with unease and concern. Her Vienna neighbors, renters of Middle Eastern descent, kept unusual hours of activity and a lifestyle cloaked in secrecy. Men came and went at all hours … Gilleo’s mother reported them to the only agency that sprung to her mind, the CIA. There was no apparent follow-up.

Two of those men were 9/11 World Trade Center hijackers.

That terrorists would be living in a quiet neighborhood in Vienna, where homeowners knew one another and kept well-maintained yards, probably did not strike the CIA as much of a probability. Albritton was never contacted by any security agencies until after September 11, when FBI pounded on doors throughout the neighborhood. Suddenly, Gilleo said, there was a "storm of activity." Ironically, the new Terrorist Screening Center is set around the block from the notorious house.

"The hardest thing was writing the book in the post-9/11 world and imagining what was missed," said Gilleo.

ALBRITTON’S SUSPICIONS and subsequent reporting of them inspired her son, author Mark Gilleo, to create a thriller based on them. "Love Thy Neighbor" was published in March 2012. Gilleo, who grew up in Vienna, knew that an Iranian family owned the house across the street. When the family moved out, it rented rooms out in that house. Young Middle Eastern men began moving in. They kept to themselves. Unfamiliar cars lined the driveway and then disappeared. Finally, a tall privacy fence went up. And Albritton had the feeling something not-right was going on there.

"Love Thy Neighbor," the third novel written by Gilleo, is not a what-if book. It does not pose the question of what could have been stopped if security agencies examined concerns that citizens expressed. Nor does it ask what might have been had Gilleo’s mom’s suspicions been analyzed before the terrorists of 9/11 turned America into a country under siege. Instead, the novel is a fictional creation focusing on a young college student returning home to Vienna for the Christmas holidays after the death of his father. In the novel, it is he who recognizes red flags and raises alarm to authorities.

The novel is about terrorists who have been in the U.S. a "long time, essentially waiting to be activated," said Gilleo. The terrorists are Pakistanis, reflecting a greater understanding of terrorist camps and training that security agencies put together after 9/11. "Love Thy Neighbor" was ranked by Amazon in the top 100 during July.

Gilleo did go inside the house across the street afterwards, after security agents had checked out the neighborhood. The owners of the house that two terrorists had briefly lived in were never implicated in the plot. Albritton, was, understandably, "upset and a little in disbelief, by the turn of events," Gilleo said.

Gilleo’s second-written suspense novel, "Sweat," is coming out on the market in August 2012. The plot line of "Sweat," about the manner in which U.S. sweatshops can legally operate out of the country, makes its way from Saipan to Washington, D.C.

"Love Thy Neighbor" and "Sweat" were both recognized as finalists in the William Faulkner-Wisdom creative writing competition.

Gilleo, 43, started writing about a decade ago. He graduated from James Madison High School in 1987, and went on to George Mason University, receiving a degree in business management. He lived in Japan for several years, taking two trips there. In 2000, Gilleo graduated from the University of South Carolina with a master’s degree in international business. He’s fluent in Japanese and maintains a financial planning business, but calls himself a "full-time" writer.

SINCE HIS FIRST NOVEL was written, Gilleo has refined his writing approach, learning a couple of things that carry his writing nowadays. "Don’t fill it [book] with a lot of technical stuff that will become obsolete, and don’t tie the story to current dates."

Writing is not about "perfection," Gilleo says. There’s some "magic" in it. It’s why some people will love a particular literary work, and others not. "If someone reads you and says it’s awful, just move on."

"You’ll never know if you’re good until you’ve finished your book," said Gilleo. "Even if the first one is awful, you’ve got to pull the trigger and go on."