Mark Gilleo takes his reader on a suspenseful journey of intrigue in “Favors and Lies.”

Mark Gilleo’s world embraces private detectives, bail bondsmen, hackers, madams, and murder. There’s some good guys in the mix, too, inching their way through the sludge that is the murky side of humanity.

Luckily for Gilleo’s family and neighbors, the people in his world are imaginary characters, fictional role-players in Gilleo’s latest novel of suspense and intrigue. The Vienna author is led by his characters on a convoluted journey and Gilleo takes his readers with him.

“When I’m writing and I don’t know how it’s going to end, it’s like being the reader,” said Gilleo, admitting his novels have a life of their own. “I’m along for the ride, like the reader is.” And what a ride it is.

There’s enough twists and turns to decork a wine bottle in this third thriller by Gilleo, “Favors and Lies,” on the market on July 1. Gilleo, who went through Vienna schools, says he develops a plot and the characters come to him. “My brain doesn’t work writing from an outline. I think writing from an outline robs the writer of the mystery.” 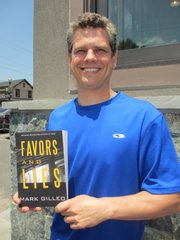 IN “FAVORS AND LIES,” Gilleo introduced a new character, a 40-year-old private detective with a law degree, Dan Lord. He’s picky about taking on clients but the murders of his nephew and his sister-in-law – nephew’s mother – spur him to action. Lord’s gut tells him circumstances are not what they appear to be. As the twists and surprises mount, so does the suspense.

“Favors and Lies” required a lot of legal research, Gilleo said. The element he had to do the most research on was cell phone technology. Good thing for Gilleo and his readers that Gilleo has lots of personal resources to clarify factual background for him. Even D.C.’s court system was out of the ordinary; all courts in D.C. are federal courts. Since “Favors and Lies” is woven of the fabric that is Washington, D.C. and Northern Virginia, Gilleo yielded to experts for factual realism.

Gilleo’s first thriller, “Love Thy Neighbor,” was published in 2012. The idea was inspired by a 100-percent-true set of circumstances --- in 1999, a Vienna woman calls the CIA, insisting that something suspicious is happening in her neighborhood.

The mother of three, in her fifties, reports to the CIA what she referred to as potential terrorists living across the street from her Vienna home. She explained that she had been witnessing odd goings-on: Middle-Eastern men living a strange life, with meetings in the middle of the night with bumper-to-bumper curbside parking, and a constant flow of young men, some who seemed to stay for long periods of time keeping to themselves. A six-foot wooden fence went up.

The CIA dismissed her concerns and her suspicions went unheeded.

They turned out to be a 9/11 terrorist cell and after the attacks on the Pentagon and the World Trade Center, CIA and other law enforcement agencies swarmed the house and neighborhood.

Here is what Gilleo said upon publication of “Love Thy Neighbor.”

“For me, there is no doubt as to the validity of the claims of the woman in Vienna … She is my mother.”

SINCE THE PUBLICATION of his first novel, Gilleo’s books have won awards from the book industry. His thrillers have been finalists in both the National Indie Excellence Awards and the International Book Awards, as well as Runner-Up at the San Francisco Book Festival and New York Book Festival. Gilleo is a “winner” at the Beach Book Festival, too.

“Favors and Lies” is available at Northern Virginia bookstores and online at Amazon, Barnes and Noble, Apple (iTunes), IndieBound, and Wal-Mart. He has a book signing scheduled in September 2014.

And Washington and Northern Virginia continue to provide fodder for his complex thrillers.

To read about Mark Gilleo, go to www.markgilleo.com. His novels are published by Story Plant Press.