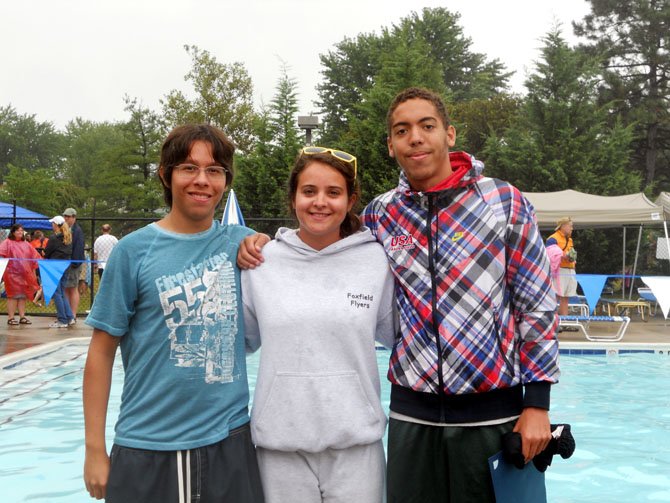 From left are Daniel Portilla, Caitlyn Harper and Chris Jones.

Centreville — Two members the Meadows Sharks Swim Team in Centreville and one member of the Foxfield Flyers in Fairfax were awarded $500 Herndon swim League Scholarships for 2012 High School graduates.

Caitlyn Harper, who swam for the Meadows and then the Foxfield teams, swam in the Herndon Swim League for a total of 14 years. She is currently the assistant coach and enjoys working with the younger swimmers. Caitlyn graduated from Chantilly High School and will be attending Radford University in the fall.

Chris Jones has been a member of the Meadows team for 6 years. He graduated from Centreville High School where he was a stand-out and captain of the cross country and indoor and outdoor track teams. Chris spent quite a bit of time working with a teammate who was new to swimming. He will be attending McDaniel College in Westminster, Md.

Daniel Portilla is also a Centreville graduate. He has been a member of the Meadows Sharks for 5 years. He is known for his quiet leadership and willingness to help anytime. Daniel will attend Northern Virginia Community College in the fall.

The Herndon Swim League has awarded six scholarships for many years. This year, with the additional funds raised from the on-line silent auction, 11 scholarships were awarded.