Firefighter of the Year
Votes

Firefighter of the Year 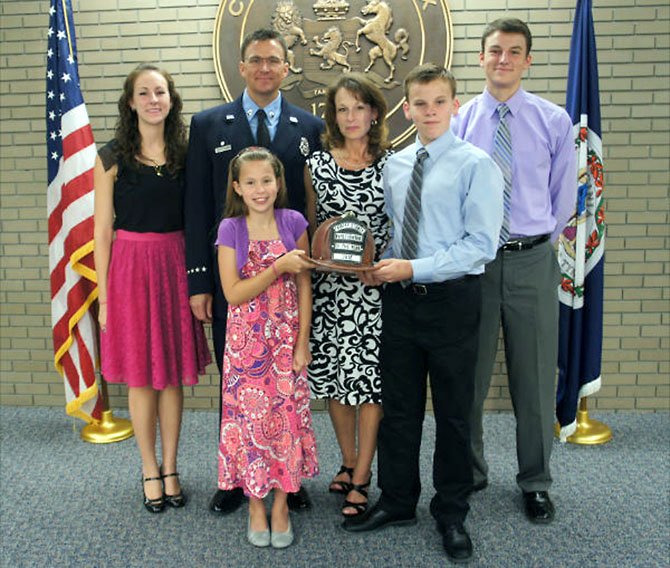 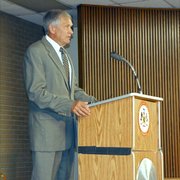 Donovan Upchurch, the honoree's father and a retired 37-year veteran of the Fire and Rescue Department expresses his pride in his son's achievements.

It was standing room only in A-Level Conference Center of the Massey Building, Fairfax County Public Safety Center on Wednesday, July 18. Fairfax County Fire and Rescue top brass, distinguished guests that included Fairfax County Board of Supervisors Chairman Sharon Bulova, a swarm of firefighters, and family and friends gathered to join in the celebration as Master Technician Robert L. Upchurch was honored as the department’s 2012 Career Firefighter of the Year. After assignments at several stations within the department’s system, Upchurch was tasked with assisting in the opening of Station Number 41, Crosspointe, in Lorton, where he continues to serve today.

The Upchurch family, Jason, 14, Jesse, 18, Jenny, 19, Julie, 11, Lynde and the honoree Master Technician Upchurch listen to the tributes for the Firefighter of the Year.

Master of Ceremonies Battalion Chief Tyrone Harrington informed the gathering that the award is the pinnacle of recognition by the department, not given for a single act when a situation occurred. "Your selection is the act of your performance every single day. You are the firefighter every recruit hopes to become. You are the example we measure others by," Harrington stated.

Chairman Bulova, Battalion Chief Brian Rooney, Fairfax City Fire Chief Dave Rohr, Captain II Brad Cochrane and Fire Apparatus Supervisor Mark Pullman all took to the podium and the accolades kept coming for the 25-year veteran who was a first responder at both the Pentagon and the World Trade Center after the attacks of September 11. Upchurch’s achievements and contributions to the department are so numerous that Captain II Cochrane, who nominated him for the award, said, "I had to double check and be sure you hadn’t won it before."

THE COMMON THEME among all the speakers revolved around Upchurch’s knowledge of the department’s heavy equipment, his dedication to its maintenance, and never-ending quest for improvement. His appointment in 2006, and continuing service as the Chairman of the department’s Apparatus Committee is a true testament to his expertise and exhibited dedication, as he is the first and only non-supervisor to have ever held this position. In this capacity, he has made over 100 design contributions, has prepared technical manuals, provides education and mechanical assistance, and has forged a beneficial relationship with equipment provider Pierce Manufacturing, even being selected as one of only three firefighters nationwide to provide feedback to the vendor and advise on future designs and improvements. If all of these achievements were not enough, Captain II Cochrane also told the crowd that one of Upchurch’s colleagues declared that when it comes to the equipment "Bob cleans things at the molecular level."

FIRE CHIEF Ronald Mastin made the presentation of the award, thanking Upchurch for his service and all of the extra time that Upchurch willingly devotes to representing the interests of the department around the country. After tributes from the recipient’s father and eldest son, Upchurch expressed his thanks to his family, friends, and colleagues. "I love this job," he said. Acknowledging the challenges being faced by the department to continue to provide safe and functional equipment given budgetary constraints, Upchurch concluded by saying, "I hear people say ‘if only we had this or that, we could really be proud.’ I say that pride is in us, not what we are in."