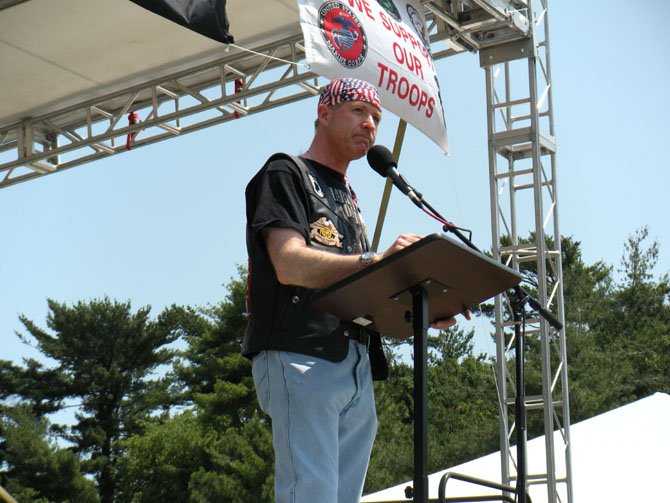 Alexandria's Kirk Lippold pauses during his address on the National Mall during the Rolling Thunder Ride for Freedom rally May 27.

Alexandria — An estimated one million riders roared in procession from the Pentagon to the Vietnam Veterans Memorial May 27 in the 25th anniversary Rolling Thunder Ride for Freedom in remembrance of American POWs and service members still missing in action.

“This is my way of helping remember those who have paid the ultimate sacrifice for the freedoms we as a nation enjoy,” said Alexandria's Kirk Lippold, commander of the USS Cole when it was attacked Oct. 12, 2000. “It is also to honor all those who continue to choose a life of consequence to serve our nation.”

Lippold, a 1981 graduate of the U.S. Naval Academy, was a featured speaker on the National Mall following the conclusion of the ride.

“I've been participating in Rolling Thunder since 2001,” said Lippold, author of the just-released “Front Burner” about Al-Qaeda's attack on the USS Cole. “It's one small way to honor those who choose to serve in the face of conflict.”

Retired since June of 2007, Lippold serves on several boards relating to veterans and security issues and continues to give speeches on the attack on the USS Cole and its immediate aftermath.

“Never has the American flag taken on such significance,” Lippold said. “Not only did I make the decision that first day not to lower the flag, but I continued to fly it at full mast under lights. I wanted to send a signal and I was committed to keep the flag flying until all the remains of our men were recovered and returned home to their families.”

Seventeen U.S. sailors were killed and 39 injured in the deadliest attack on a U.S. Navy vessel since an Iraqi missile struck the USS Stark on May 17, 1987.

“On the ninth day, we lowered the flag and had 17 sailors lined up as it was passed to each one of them in memory of those lost,” Lippold said. “When the USS Cole was rebuilt, that same flag was mounted and hangs to this day on the mess deck in honor of those men.”

Rolling Thunder, whose first ride attracted 2,500 riders, is a nonprofit organization dedicated to promoting legislation to increase veterans' benefits and resolve POW and MIA issues from all conflicts.

The Department of Defense POW/Missing Personnel Office lists 83,436 service members still missing in action dating back to World War II. Six of those are personnel from the Iraq and Afghanistan conflicts, including Sgt. Bowe Bergdahl, whose parents Bob and Jani joined Lippold as featured speakers at the rally.

“It means so much to be here,” said Jani Bergdahl as she thanked the many riders who lined up to meet and offer her and her husband support for the safe return of their son.

Mark Given made the trip from Springfield, N.J. to participate in his 10th ride. His son Martin, 12, was along for the first time.

“The reason I'm involved is to help veterans and family members of those who didn't return from combat,” said Given, a Persian Gulf and Desert Storm veteran whose brother Martin was killed in Vietnam. “Rolling Thunder's message is for our POWs and MIAs — that we will never forget.”